While another doctor and a nurse tried to intervene, the duo kept at it and resorted to name calling in the middle of the ongoing procedure. 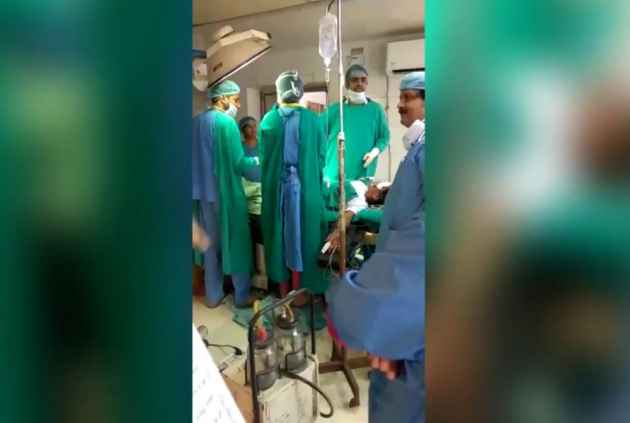 Two doctors went for each other’s jugular and traded invectives while operating a pregnant woman who lost her newborn, shows a video from the operation theatre of Umaid Hospital in Jodhpur on Tuesday.

One of the doctors, surrounded by nurses, went menacingly towards the other with his blood-soaked gloves midway through the surgery while the woman lay on the table with an outstretched hand.

Dr. Ashok Nanaval, a gynaecologist, and Dr. M.L. Tuk, an infertility specialist, started arguing over something as soon as the operation began.

The Principal of Sampurananda Medical College (under which the hospital is), A.L. Bhat, has said that he was informed about the "viral" video, where two of the doctors were quarreling and using indecent language inside the operation theatre.

"This is condemnable and a disrespect of the operation theatre," Bhat said.

He informed that both the doctors have been removed from their post.

Bhat also revealed, "A committee has been established to look into the matter and based on this committee's report, a strict action will be taken against them."

Condemning the whole incident, Prinipal Bhat also said that they have recommended the government to take this matter seriously.

Sources reveal that the newborn died in the operation theatre to which Umaid Hospital Superintendent Ranjana Desai said that the child died due to low heartbeat, while the woman was "safe," adding that they are waiting for the reports.

"I was not present in the hospital at the time of the incident but the moment I was informed, a clarification was demanded from both the doctors," he added.

She further said that the behaviour and the language used by the doctors were "not acceptable".

"A committee has been set up that will submit its report after gathering factual information within three days," Desai said.

Desai conveyed that the committee has begun the investigation and added, "This is a very serious matter."

The onlookers have said that the intensity of the fight was such that the doctors would have beaten up each other.

Amidst the spat, the doctors standing inside the operation theatre kept looking on, as mere spectators.

On asking whether there are some internal issues in the hospital, Desai denied, saying she has not received any information about it. (ANI)

Both doctors have been removed immediately and disciplinary action will be taken against them: AL Bhat, Principal #Jodhpur pic.twitter.com/zJ8McUVoIG