The governor's move came amid dramatic developments in the state politics after the PDP, the Congress and the NC came together to stake claim to form government

Jammu and Kashmir governor Satya Pal Malik on Wednesday night dissolved the state Assembly amid claims by parties to form a government.

The governor's move came amid dramatic developments in the state politics after the PDP, the Congress and the NC came together to stake claim to form a government that was countered by Peoples Conference leader Sajad Lone with the BJP's backing.

Governor Satya Pal Malik made a terse announcement saying he was exercising powers conferred on him by the Jammu and Kashmir Constitution and dissolving the House which had two more years to go.

The dissolution came shortly after the Peoples Democratic Party (PDP), the National Conference and the Congress came together and staked claim to form a government in a bid to checkmate moves by the Bharatiya Janata Party to form a government with the support of PDP rebels and Lone. 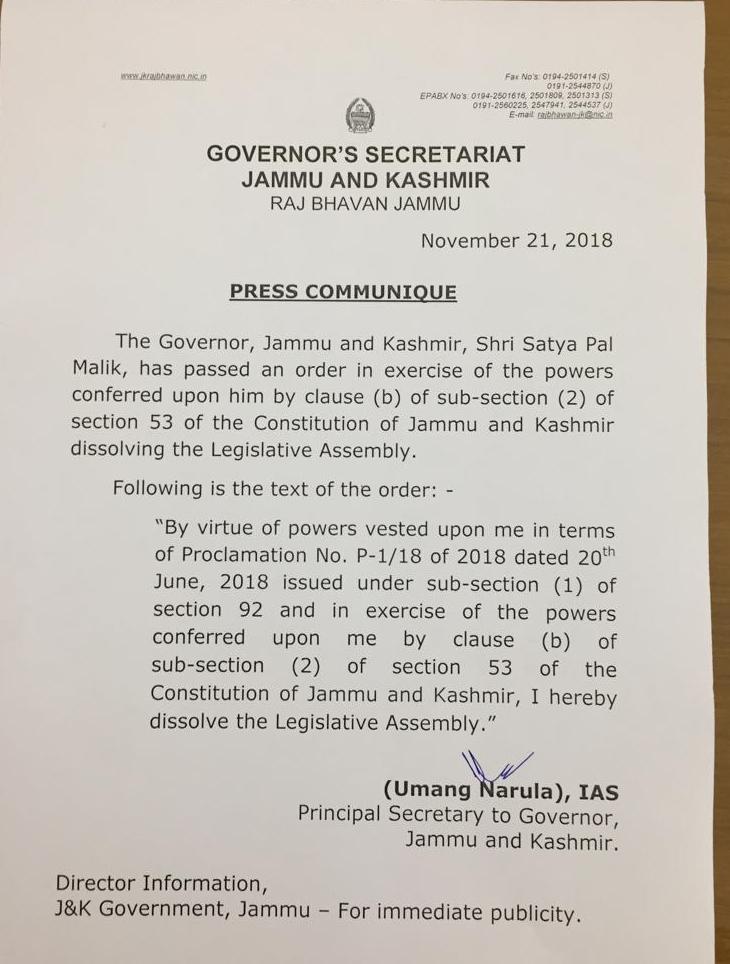 Late in the evening, former Chief Minister and PDP leader Mehbooba Mufti wrote to the Governor saying the Congress and National Conference had decided to extend support to her party to form a government in the troubled state.

This was countered by Lone, who also wrote to the Governor staking claim to form the government with BJP's backing. He claimed the support of 18 MLAs besides the 25-strong BJP, contending that it was more than the required number for majority.

Mufti, in her letter to the Governor, said that with a strength of 29 MLAs of its own, the PDP would have a collective strength of 56 MLAs including 15 of National Conference and 12 of the Congress.

"Since I'm presently in Srinagar, it would not be possible to call on you immediately and this is to keep you informed that we would be seeking your convenience shortly to stake the claim for forming the government in the state," Mehbooba wrote to the Governor who was said to be away in Chandigarh for a wedding.

Until news of the dissolution came, former Finance and Education Minister Altaf Bukhari was reportedly tipped to be the next Chief Minister of the PDP-led collation.

In the 87-member House, the BJP has 25 MLAs, all from Jammu, and claims the support of Kashmir Valley-based Peoples Conference which has two MLAs.

Mufti said the Raj Bhavan in the winter capital Jammu strangely had not received her letter that was faxed. She said she was trying to contact the Governor over telephone.

Hectic developments marked the day with consultations between leaders of the parties in the valley after reports emerged that the BJP was trying to form a government with support of rebel MLAs from the PDP along with the backing of Lone's party.

The developments came five months after the BJP pulled out of the Mehbooba Mufti government leading to the fall of the PDP-BJP collation that lasted for over two years.

The political developments also assume significance in view if the fact that that tenure of the Governor's rule is ending next month, which will be followed by President's rule of no government is formed.

Bukhari called on National Conference Vice President and former Chief Minister Omar Abdullah to discuss the modalities of a possible government formation by the PDP and the Congress with NC's support.

The reports of a possible government formation by the PDP and the Congress with NC's external support got some credence with senior Congress leader and former Chief Minister Ghulam Nabi Azad confirming to some reporters that talks were going on between the three parties to cobble an alliance that would keep the BJP out of power in the state.

Dissidents of the PDP supported by Peoples Conference have been speaking of a government formation in the state with the support of the BJP ever since Governor's rule was imposed.

Sajad Lone has been emerging as the leader of a possible third front that could in the future provide an alternative to the PDP and NC.

Senior PDP leader and Lok Sabha member Muzaffar Hussain Baig ruffled many a feather on Tuesday when he expressed his willingness to join Sajad Lone if a third front was formed in the state.

Governor Satya Pal Malik has said that even if the state was placed under President's rule next month, the state Assembly would not be dissolved.