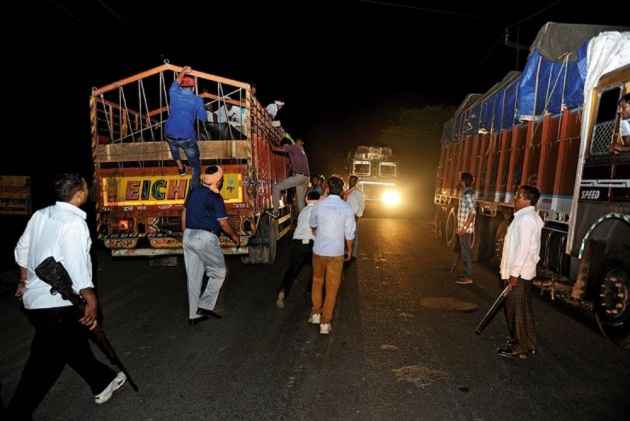 An "independent investigation" into the killing of two Muslim cattle traders allegedly by gau rakshaks in Jharkhand's Latehar district in 2016 has claimed that the state police "weakened" the case.

The report, brought out by a group of NGOs, including those based in the US and the UK, was today launched here in the presence of the family members of the victims.

"Not only did the police not fully investigate the crime on the basis of eyewitnesses accounts and testimonies, but also failed to press appropriate charges against the accused. This has considerably weakened the case," alleged the report.

The victims -- Mazloom Ansari (32) and Imtiaz Ansari (12) -- were beaten and hanged with a tree in Latehar allegedly by gau rakshaks on March 18, 2016. They were carrying eight oxen to a cattle fare when the incident occurred.

"The main accused has not been arrested in the case and police did not charge the accused for abduction, loot and criminal conspiracy, thus supporting them in the case," said lawyer of the victims Abdul Salam.

Senior lawyer of Supreme Court Prashant Bhushan said that the lynching allegedly by gau rakshaks were "endangering" the democracy and civilisation of the country.

"Such incidents have increased in the past four years and there is no action despite availability of witnesses and videos of such incidents," he alleged.

"In this case of Latehar, all the accused are on bail and the main accused has not even been arrested which speaks about support of police to them," he alleged.

The family members of the victim alleged that the accused had issued a threat to Mazloom to stop cattle trading or face the consequences.

"Two of the accused, along with 5-6 other people, had come to our place before the incident. Mazloom had told me that they had asked him to stop cattle trading or he would be killed," alleged Mazloom's widow Saira Bibi.

The report has demanded the police and prosecution for immediate arrest of the main accused in the case and moved the Supreme Court for cancellation of bails of all the accused.