Jal Tarang: How Well Does It Irrigate The Classical Music Scenario?

Today is World Water Day. A look at the state of an Indian instrument that relies on the earth’s most common liquid for its timbre. 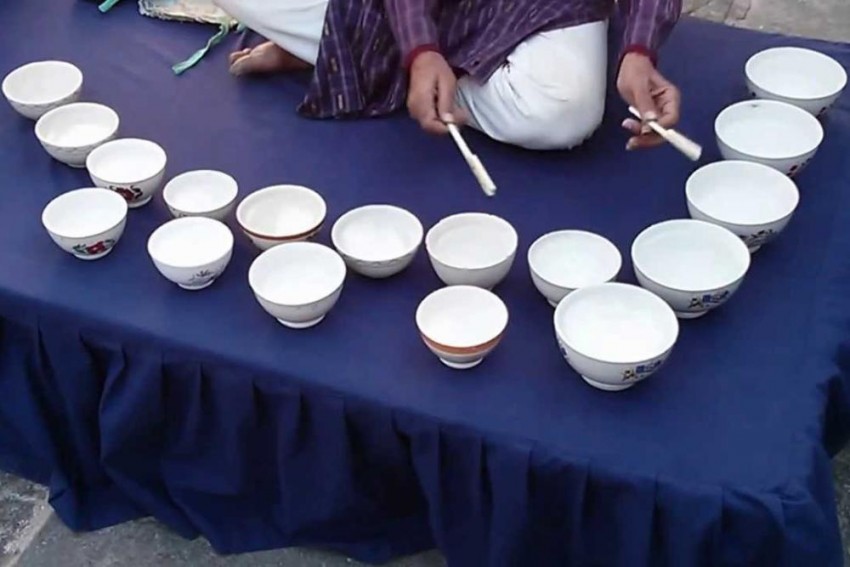 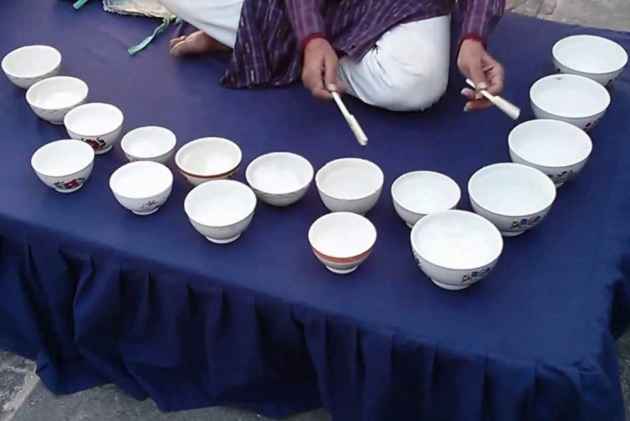 The musicality of an instrument being completely dependent on the quantity of water it holds may sound a bit weird, but then it is one basic principle that makes the jalatarangam a distinct presence on India’s cultural map. Arranged almost in the shape of a semicircle before the performer, it forms a set of roughly one-and-a-half dozen porcelain bowls containing that colourless H2O liquid, which is actually a common substance covering 71 per cent of the earth’s surface.

Each of the bowls, varied in size though not exactly in shape, is filled with a certain levels of water so as to fix their pitch that finds expression when struck with a pair of wooden sticks. Typically lined up with pots of decreasing sizes from left to right, the instrument produces jingles that lend the music an oriental charm. Obviously, the bigger bowls generate notes of the lower octave, while smaller ones are for the higher registers.

The assembly can sometimes be U-shaped and, in an odd case, the containers can be made of a metal (like aluminium or brass). With all its systemic limitations, this ‘bowl music’ has for long made its mark in Indian classical music. Known as jal tarang in the Hindustani system, the instrument has its equally minuscule number of practitioners down the country in the Carnatic stream too.

The relatively speedier nature of the southern music perhaps lends itself to the jalatarangam kinetics in a way better than it finds positioned upcountry. That is because Carnatic music is defined by its frills which this instrument can manage to produce, though not in the oscillatory gamaka-filled fashion integral to the idiom. Up north, Hindustani music is focally slow; what’s more it comes essentially with the long slide (meend) that the jal tarang is incapable of producing—its physics doesn’t allow the chimes to reverberate for long.

What adds to the visual narrative of a jalatarangam concert is the performer’s frequent preoccupation with changing the water levels of the bowls. He or she will have to alter the quantity of the liquid—definitely after the end of a piece of rendition, given that the next is going to be in another melody-type or raga. It isn’t rare to see the musician changing water levels even amidst a khayal (in Hindustani) or a kriti (in Carnatic) when he or she senses a bit of technical imperfection in the presentation that typically includes the alap(anam) as well.

The historicity of the jalatarangam fails to follow a consensus among researchers, though the instrument is generally categorised as ‘ancient’. The Kamasutra is said carry the “earliest mention” of the jal tarang, but the pivotal work on human sexual behaviour is written by aphilosopher whose life period itself is not very certain—Vatsyayana lived in India sometime between 600 BC and 530 AD is the general notion.

Called the jal yantra in the medieval times, the instrument has its name present in the text of Sangeet Parijaat, a text written in that period. It slots jalatarangam as an idiophone—an instrument that creates sound primarily by vibrating as a whole, without the use of strings or membranes. To put in the Indian context, it is called ghana vadyam, which includes gongs and cymbals. Certain studies judge the 22-cup jalatarangam to be complete, while giving mediocrity status to those with around 15 cups.

As for the classical artistes, contemporary India has a handful of them as exponents of the instrument, often referred to as rare and even dying. Tamil Nadu’s Anayampatti near Salem has contributed to Carnatic jalatarangam. The place has had S. Dandapani, who has been an expert in the instrument in the 20th century. His violinist-accompanying brother, Anayampatti S. Ganesan, began playing the jalatarangam after Dandapani’s death. Today, the veteran is a senior exponent of Jalatarangam, having been a busy artiste in the Margazhi festival of Chennai in the December-January season. His disciple, Vikas Achutharamaih, is gaining reputation as a jalatarangam vidwan.

Just north of the state, Andhra Pradesh has Nemani Somayajulu, who actually underwent training from none other than Dhandapani. If Ganesan also plays the violin and has also been a vocalist, Somayajulu is simultaneously a percussionist: the 15-bowl jalatarangam artiste plays the mridangam and the ghatam as well, as an artiste with All India Radio.

Kerala has Kottayam T.S. Ajithkumar living in its south-central belt, playing the jalatarangam. The middle-aged instrumentalist has been in Carnatic music circles for the past quarter century, having earned his training from RLV Music College in Tripunithura, south of Kochi.

As for the jal tarang in Hindustani, Shashikala Dani in upstate Karnataka’s Hubli takes up the challenge of lending musicality to the idiom known for its meandering nature that is largely absent in her instrument. A senior-grade artiste with AIR and Doordarshan, this middle-aged artiste from Dharwad district was only 17 when she debuted on a public stage.

Maharashtra’s Milind Tulankar carries forward the legacy of his late grandfather Shankar Kanhere renowned for his expertise in playing the jal tarang. Also proficient in playing the santoor, tabla and the harmonium, the artiste from Satara was also trained under Pt Dattopant Mangalwedhekar of Pandharpur. An artiste graded by AIR, Tulankar has authored a book on jal tarang.

Ranjana Pradhan is another such acclaimed exponent in the Hindustani style. She took up playing the jaltarang after her father once advised her to learn an instrument that did not have very many presenters. “Also, jal tarang (up north) was primarily a male domain,” she notes. “So, I thought let me try this one.”

For varied reasons, the jalatarangam continues to make an appearance on the Indian classical music scene, albeit marginally.

Sanjay Dutt Threatens Legal Action Over A Biography That Talks About His Ladies, Drugs, Shooting Spree Inside Home