The 43.4-metre tall rocket weighing about 640 tonnes furiously rushed to the skies with a thick orange flame at its rear carrying the GSAT-29. 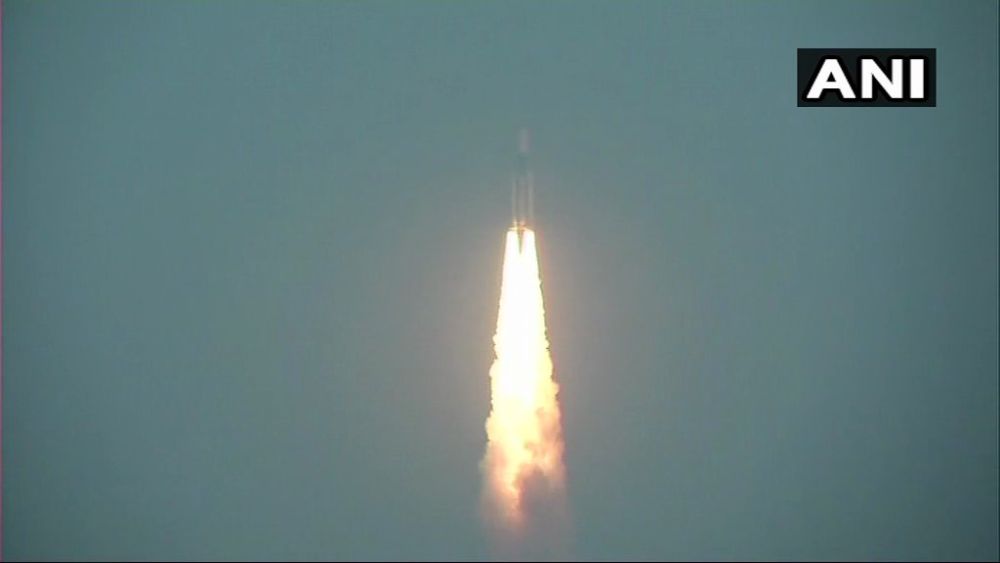 The GSLV-Mk III rocket on its second developmental flight slung the 3,423 kg GSAT-29 satellite in a geosynchronous transfer orbit (GTO) from where it would be taken up to its final geostationary orbit.

Precisely at 5.08 p.m. the GSLV-Mk III rocket with a strong deep growl rose into the sky breaking free from the second launch pad at Satish Dhawan Space Centre.

The 43.4-metre tall rocket weighing about 640 tonnes furiously rushed to the skies with a thick orange flame at its rear carrying the GSAT-29.

The GSLV-Mk III with a capacity to carry four-tonne satellite, is a three stage/engine rocket with two strap-on motors powered by solid fuel. The second stage is a core liquid fuel booster and the third is the cryogenic engine.

On 15 Aug’17, our PM declared a great gift for all of us that is #Gaganyaan mission. Already team is identified&work is going on. For first unmanned mission of #Gaganyaan activity, we are planning for 2020 Dec. Team ISRO has the capability to do the work: K Sivan, Chairman ISRO pic.twitter.com/pTvnjuxbE9

Just over 16 minutes into its flight, the rocket put into orbit the GSAT-29 satellite.

Speaking about the mission, Indian Space Research Organisation (ISRO) Chairman K. Sivan said: "The second successful mission of GSLV-Mk III marks the entry of the rocket into operational phase after completing the developmental phase. This mission is important regarding GSLV-Mk III and GSAT satellite series."

The Indian space agency had flown a similar rocket on June 5, 2017 with GSAT-19 satellite. Prior to that ISRO had flown another rocket with 3.7 tonne dummy payload in 2014 to test its in-flight structural stability and aerodynamics.

According to ISRO, GSAT-29 with a life span of 10 years is a multi-beam satellite that carries Ka/Ku-band high throughput communication transponders intended to meet the communication requirements of users, including those in remote areas.

In addition, several new technologies such as Q/V-band payload, data transmission through optical communication link will be demonstrated. This will help in realising future advanced satellites, ISRO said.

India currently has two operational rockets -- the Polar Satellite Launch Vehicle and GSLV-Mk II -- with a lift-off mass of 415 tonnes and a carrying capacity of 2.5 tonnes.

India puts into orbit foreign satellites for a fee using its lighter rocket PSLV. Revenue for launching satellites depends on the weight of the satellite -- higher the weight, higher will be the revenue.

Foreign customers are yet to come for GSLV-Mk II rocket.

The GSLV-Mk III when it graduates from its development flight status to operational flight status may look at flying heavier foreign satellites.

"The first operational mission of GSLV-Mk III will be none other than the second moon mission -- Chandrayaan --slated in January 2019," Sivan said, adding that the cost of the rocket is around Rs 300 crore and it will be used for India's human space mission planned in 2020.

Vice-President M Venkaiah Naidu and Prime Minister Narendra Modi congratulated the Indian Space Research Organisation (ISRO) scientists Wednesday for the successful launch of the heavy-lift GSLV rocket, carrying a latest communication satellite, saying it would boost the communication services in the remotest corners of the country.

"Congratulations to #ISRO scientists for successfully launching GSAT-29 communication satellite today, which will help in providing broadband connectivity in remote areas of Jammu & Kashmir and the North-Eastern States," the vice-president's secretariat said in a tweet.