'Is This The BJP-RSS Idea Of Inculcating Education And Protecting Children?' 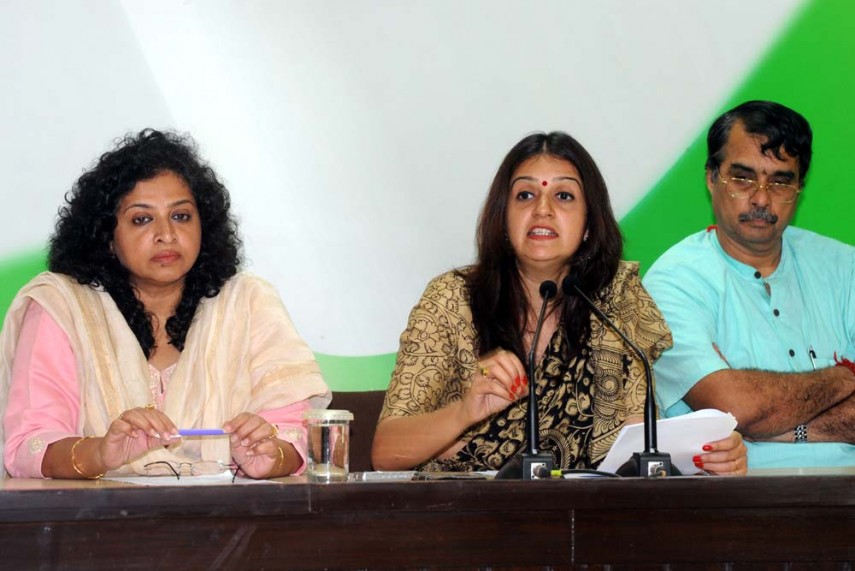 Prime Minister Narendra Modi’s promise of ‘Beti Bachao, Beti Padhao’ took a beating today in the light of the Outlook cover story on RSS affiliated organisations trafficking tribal girls from Assam under the garb of educating them.

The Congress came down heavily on the Modi government today. It questioned the government, the BJP and the Sangh Parivar on whether trafficking children in the age group of three to eleven from five border districts of Assam, is the Modi government’s fulfillment of ‘Beti Bachao, Beti Padhao’.

“Is this the idea of the BJP and the RSS of inculcating education and protecting children? Would the BJP ensure that the 31 girls return home to their families who in reality have been denied access to their children,” asked AICC spokesperson Priyanka Chaturvedi at a special press conference in Delhi today.

The Congress is planning to raise the issue in Parliament. Shobha Oza, another AICC spokesperson, wondered whether the Gujarat government would dare to take action against the RSS and Saraswati Shishu Mandir Vidyalaya, where 20 of the 31 girls are staying and are being indoctrinated.

Eleven of the 31 girls are staying in the Mata Gujri Kanya Chhatravas, Patiala, which is not even registered under the Juvenile Justice Act, 2000. Will the Shiromani Akali Dal government in Punjab take action against the organization, she asked.

Will the BJP government take action against those in the RSS who are involved in the alleged racket for defying the Juvenile Justice Act, 2000, which states that a No Objection Certificate should be obtained from the parents before taking the child, said Chaturvedi while adding that the NoC was obtained from the parents after a month following a hue and cry in the area.

In his reaction to the cover story, Congress leader Anand Sharma told Outlook, “RSS is pursuing a very destabilising and devious agenda. They have extended their networks and that of its affiliated organisations. They have completely vitiated the environment which actually threatens to break the social fabric of the country. It is so evident from the rising intolerance and silence of the Prime Minister to the government and its cabinet ministers defending vigilantes. For instance, we had ghar wapsi, love jihad, gau rakshak and now they are talking about those non-participants in the freedom struggle, the RSS as such. These are ideological descendents of those who opposed the freedom struggle and who celebrated the assassination of Mahatma Gandhi. They have let loose goons, lumpen and have created an environment of fear and distrust. Their agenda itself is questionable.”

CPM Politburo member Brinda Karat, who was horrified at the trafficking and the indoctrination by the Sangh, told Outlook, “I want to ask Mr Mohan Bhagwat if this is the idea of Hindu Sanskriti (culture) of Mr Bhagwat and his parivar that girl children of vulnerable community are snatched away from their parents for indoctrination?

“The BJP is in power in both Punjab [it is an ally of the ruling SAD] and now in Assam; I would expect these two governments to immediately arrest those involved in this racket.”

Annie Raja of the National Federation of Indian Women, the CPI-affiliated women’s wing, told Outlook, “We hear about ISIS recruiting people in their way and in India, the RSS is also doing so silently. In the name of extending help, the RSS is violating the Constitution because they have an agenda to create a Hindu rashtra which means the RSS is preparing people to fight against other religion and community.

“No political party has an agenda against any particular religion or community. So if BJP enrols people, it is for political purposes. But the RSS recruitment has a dangerous signal. They are trying to put seeds in the minds of people to have a strong opinion against people of other religion and community.”

This government is focused on the North East and “we are concerned that these children who have been picked up in the name of education might be sent back to the state but to spread Hindutva ideology.”