Is This The BJP I Campaigned For?

I campaigned for the BJP in the last Lok Sabha elections as I sincerely believed that Atal Behari Vajpayee was the best prime ministerial candidate in the fray... 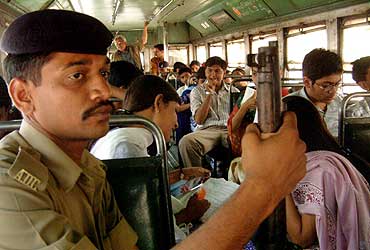 It is difficult to establish the depth of the anguish I have felt in the last month, given the fact that Ahmedabad is my home; that I am a devout Hindu; and that I have been a supporter of the BJP for the past 3-5 years. Moreover, I even campaigned for the BJP in the last Lok Sabha elections as I sincerely believed that Atal Behari Vajpayee was the best prime ministerial candidate in the fray. My response to aghast liberal friends used to be that the BJP would hopefully evolve like the US Republican Party with its fringe extreme right elements (like the Christian coalition) who would create noise but not make or execute policy.

The carnage of the past month has shown this view to be naïve and optimistic, and the ‘liberal’ prime minister’s inability to act in the face of pressure from the extreme right underscores the extent to which a lunatic fringe has paralyzed an entire state, with the official machinery all but looking away (and impeded when it did try to enforce the law). Various attempts have been made by the VHP and its apologists to justify the violence in Ahmedabad, but nothing can change the fact that what happened was essentially terrorism of the worst kind.

The first claim we repeatedly hear is that "Ahmedabad was a reaction to Godhra". Where have we heard this before? Every case of murder of innocents whether in Kashmir or the World Trade Center is linked by the jihadis to an earlier atrocity by someone else. At a recent seminar at the Massachusetts Institute of Technology, the VHP general secretary of the US eloquently quoted from the Gita and claimed to the audience that "Godhra mein adharam hua," and said that he was surprised that there wasn’t greater violence across the country. Yes, let me say loudly that Godhra was a shocking outrage, and that the perpetrators need to be swiftly tried and given the maximum legal punishment. But nowhere in its 18 chapters, does the Gita talk about killing innocents in blind retribution. Blaming a collective for the actions of a few individuals, and unleashing mindless violence against them is the first attribute of terrorism.

Another common ‘explanation’ which should be quickly debunked is the idea that the violence was a spontaneous reaction of frustrated, unemployed youth. Yes, there was anger, but the youth needed to be mobilized, and the biggest danger of the VHP/Bajrang Dal is their explicit hate-based mobilization, which in turn gives them a street power that has tremendous destructive capacity. By directing the frustrations of youth towards an imaginary ‘enemy’, the Bajrang Dal creates a Molotov cocktail that is waiting to explode. This hate has spread like a cancer and creates the tinder that burns instantly when there is any untoward incident. Again the parallels with how suicide bombers are recruited and how Hitler mobilized his young battalions against the Jews are for all to see.

The final and most dangerous aspect of the Hindutva brigade is the extent to which their cadre are indoctrinated, to the point of being incapable of individual rational thought. While this has been apparent in some of my discussions with the ‘faithful’, the biggest evidence is the various peace fasts, sit-ins and marches that have been attacked in the name of Hinduism. The intolerance and hatred in these people is completely shocking when one encounters them the first time, but on reflection it is probably no different from a conversation with a fidayeen, or a young lieutenant in the Gestapo who has been convinced that ‘Germany will be great once we get rid of the Jews’. This really is no exaggeration, because the recent statements of important leaders of the VHP make it clear that they view the recent killings as ‘encouragement’ to the minorities to ‘behave or leave’. Again attempting to use wanton violence as a tool for political goals is probably the most basic definition of terrorism.

People often wonder how ordinary Germans allowed the holocaust to happen, and the answer is that they either chose not to believe it was true or let themselves be scared at the thought of individually opposing the forces at hand. The parallel with the silent majority of Hindus in India today is quite apparent. Given the sheer numbers in India, the VHP/Bajrang Dal are able to cause havoc even by mobilizing a very small fraction of the population, and it is easy to get overwhelmed by the mistaken perception that they enjoy ‘popular’ support, when in fact all they have is a few thousand hooligans.

We are fighting a battle for the soul of India here. Careful research on the subject of communal riots in India shows that an important contributor to peace is the prevalence of institutions that allow people from different communities to interact with each other on a daily basis that prevents the dehumanizing of the ‘other’ that happens in a riot. What this means for us in our individual capacities is that we need to reach out to our Muslim friends and neighbours and feel their pain and insecurity as a result of this event and in our own limited ways try to assure them that nothing will happen to them while we are around. Given that the instinct for most of us is to stay at home away from the danger, this will be difficult, and will take moral and physical courage. After all Israeli Prime Minister Yitzhak Rabin was assassinated by an intolerant Jew and Mahatma Gandhi was killed by a fanatical Hindu. Like a good friend told me last week, "we may have allowed ourselves to forget all of Gandhi’s teachings, but we should never have allowed ourselves to forget who killed him." The danger is too real, and we cannot afford to be scared.

Karthik Muralidharan is a doctoral candidate in economics at Harvard University with a focus on political economy and development.A shorter version of this piece first appeared in the Indian Express