Inzamam Is A Binding Force

Pakistan dressing rooms have been volatile. At the moment it is not. You may lose a series here and there, but it does not mean that you change the skipper mid-stream. Just after the series loss to India, we appointed Inzy as captain for another 11 m 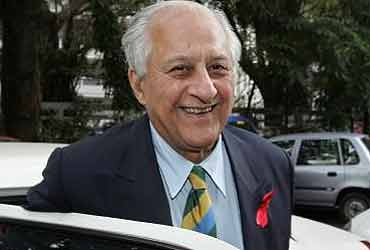 Two of Pakistan's most famous but controversial players -- Inzamam-ul Haq and Shoaib Akhtar -- received a huge boost, with the cricket supremo of their country backing their conduct and attitude to the hilt.

Chairman of Pakistan Cricket Board Shaharyar Khan said Inzamam had been the "binding force" in an otherwise volatile dressing room and billed him to the lead the side in World Cup 2007.

Rating Inzamam better than some of the more legendary skippers the country had seen, he said the burly batsman had brought the team to a level never reached before and the Board was not looking at any other alternative to the skipper's post till the World Cup.

In a wide-ranging and exclusive interview, the former diplomat also revealed the PCB's change of heart towards Shoaib who he said had "turned a new leaf" and become a totally different bowler from the days when he was dismissed as an errant and precocious talent.

Also finding favour with the PCB chief was coach Bob Woolmer, who has been much-vilified in the wake of the 4-1 defeat to India in the recent one-day series.

Not one to mince words, Shaharyar dismissed suggestions to have the India-Pakistan series named after one of the players from either side of the border as mere "gimmick", saying what was more important was the quality of cricket and not after whom the trophy was named.

Do you think Inzamam will lead Pakistan in World Cup 2007?

Yes, I have personally no doubt about it. Now what has happened is that Inzamam has lost the series and in losing, he has taken a lot of criticism over his fitness, fielding and other things. But I have no doubt that Inzamam is a superb captain.

He has brought the team to a level that has been unprecedented. We may have had some great cricketers in the past but we never had such a united team, there is no faction, nothing. And much of the credit for this must go to Inzamam. I think it would be extremely foolish to start thinking of alternatives when we have a man who has brought the team to this level. Yes, you may lose a series here and there, but it does not mean that you will change the skipper mid-stream. Just after the series loss to India, we appointed him as captain for another 11 months.

Pakistan dressing rooms have been volatile. At the moment it is not. I often visit the changing room, the players are very calm and it is partly due to Inzamam's influence, which is very significant. He is a low key and modest person. His example is followed by others. There is no insistence, but the players do sit down together and pray. Woolmer, who first felt that there was too much religious strain, now feels it is a good binding influence.

How does the Board view Shoaib and is his recent injury career-threatening?

We knew his injury was genuine. It has been recognised now that he has turned a new leaf as far as his attitude, training and discipline is concerned. It was very evident during the series against England.

What we now fear is that his injury could be worse than what we initially thought. As a very fast bowler, he needs his body to be working 100 per cent which at the moment is not. He has fractured his ankle but it is not his ankle but the knee which is causing us more anxiety. He is now in Australia, if he undergoes an operation and gets it cleared, well he may play against England but if does not happen like that, we do not know really, I mean we will have to cross the bridge when it comes.

How does the PCB justify having a foreigner as a coach when you have so may great cricketers to choose from?

Good cricketers necessarily do not make good coaches. What we are looking at is the science of coaching which has moved forward, no one can deny the importance of video and specialised training, the manner in which a coach can raise the standard of the team. The best coach is someone who can look at the video and point it out to the player where he is going wrong.

Now Pakistanis coaches are getting degrees, Wasim Raja is a master coach for instance, so we may get to the time when we have our own coaches but for now we cannot deny the importance of having a foreign coach.

All the talk about communication gap between Woolmer and the players is nonsense. Our players know enough English -- they have been playing all over the world -- to understand what the coach is saying. The language of cricket is very simple. All the criticism that has been levelled at Woolmer, it is not fair. One must look at the facts first.

So has Pakistan moved away from the times when heads would begin to roll after every series defeat?

Yes, we do emphasise a lot of continuity and stability. We also lost a series against Australia but losing does not mean that we throw out everybody. It is important to instill security and confidence among the players, it is a part of our policy. We reappointed Inzamam for 11 months immediately after the one-day series loss to India.

There is pressure when you lose, but this pressure is developed when you are losing consistently and by the manner of losing. If you go down without a fight, that is what creates pressure. We have been fighting back even though we may have lost some matches. As for instance in the Karachi one-dayer in 2004 when we made 350 odd while chasing and still lost, no one in the stadium was disappointed, they went back saying what a good show. But in the two Test matches that followed, we went down without a fight. Public appreciate and don't mind if we lose after showing some fight but they do mind if you don't fight at all.

Do you nurture the idea of having some of the great batsmen from India come across and train your batsmen and vice versa?

I think it would be some kind of a gimmick. We have nothing against players from India giving our players some tips. But basically it does not make much of an in-depth difference. I would rather have players meeting each other more often on the cricket field at all levels like under-19 and under-15.