This is the first time in my life that I am sitting down to write an article while a commando sits in my living room to protect me from possible assailants. News Updates. 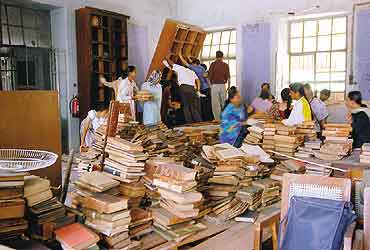 This is the first time in my life that I am sitting down to write an article while a commando sits in my living room to protect me from possible assailants. This provision has been made by the home minister of my state - Maharashtra - to protect me from other Maharashtrians, who were earlier incited by their "leaders" to attack the Bhandarkar Oriental Research Institute (BORI), a world-renowned centre of research in Indology at Pune.

This is an honour I had never expected. I have been a poet, a writer, and a translator for the last 50 years. Although I have done other things, such as making films, my principal identity is literary. I was much less surprised when, in the past, I received literary awards and even an international award for a film. Being awarded police protection without even asking for it, is an awesome honour and, indeed, I am awed.

But let me tell the story as it dramatically unfolded last week. It began without any warning on January 5, with an attack on the BORI at about 11 am when the institute begins its day. I was in Delhi to attend a cultural festival and was stunned when, on January 6, some participants told me about the attack. That night, my wife called me from Pune to inform me that the 'organisation' that took responsibility for the attack had named me among the people they would target as those whose assistance was acknowledged by Professor James Laine, an American academic and author of a recently published, now withdrawn, book on Shivaji. She also told me that many of those who were so acknowledged by Laine had "condemned" him and, in a manner of speaking, had apologised to the "public" for having "helped" him in any way. This left me aghast.

On the morning of December 8, before leaving for the airport to board the flight back to Pune, my wife called and told me not to be surprised if she received me at the Pune airport with an armed escort provided by the Maharashtra government. That bodyguard has been with me since and he carries a weapon. He is a nice, unobtrusive person, but his presence is as reassuring as it is profoundly disturbing.

I know that the BORI is not the World Trade Center and that September 11 makes more sinister sense to more people than January 5. No human life was lost when the BORI was attacked. What was damaged irretrievably, in material terms, were rare books that few people outside the world of scholarship know about and therefore care for -  manuscripts, inscriptions of value to historians, information and records on which our present and future understanding of Indian traditions depends. This is not a mere material loss and it does not take a high degree of education to understand that.

But in a way the trauma and the signals it continues to generate, the questions it raises, undermine two things that most of us naively take for granted: that we are a civil society with a will not only to survive but to thrive without fear, and that our democratic republic is real after 54 years of existence as a printed book. The printed book that represents our unconfirmed belief and hope in democracy has been destroyed-though not physically-by the attack on the BORI. But the government of Maharashtra, the Union government, the Supreme Court, the Parliament, the president of India and the governor of Maharashtra, seem so far to be unaware that what has been attacked is not merely a centre of learning but the very future of scholarship in India and the civil liberties that make it possible to lead a civilised life.

This is not an ordinary law and order problem that the Maharashtra home minister can handle and the Union home minister can ignore. It was not created by a book on Shivaji written by a "foreign" scholar using Indian sources and resources. Nor can it be solved by the state of Maharashtra suing Professor Laine or his publisher, banning the book and providing police protection to all whose help Professor Laine has acknowledged. It is a case of domestic terrorism that has been tolerated by our union and state governments for far too long; and, ironically, this happens to be a year of general elections. It is an arrogant and defiant signal sent by another extra-constitutional "sena" to whatever constitutional authority we believe in and those who govern us in its name.

The media have not pondered over this. Even intellectuals, writers and researchers in Maharashtra do not seem to have understood the true nature of the damage and its implications. They have all readily condemned Laine's book (most of them also admit that they have not read it!); noted the fact that he is a foreign scholar and not Maharashtrian or Indian; and have appealed for the restoration of the BORI in view of the immense material damage done to its archive and library. They do not perceive it as an attack that defies the Constitution by people who hold press conferences after the act and have the gumption to say that not only do they not regret what they have done but would do it again. Those extraordinary assertions made by leaders of the "Sambhaji Sena" have been reported by the Marathi and the English press in Pune. The government of Maharashtra does not seem to have the will to respond to this threat.

Luckily for Laine, he is in Saint Paul, Minnesota, USA. But we who have to live and work in a Talibanised Maharashtra continue to face a form of domestic terrorism that announces the rise of neo-fascism in India.

Dilip Chitre, a Sahitya Akademi awardee is a poet, writer, translator of Bhakti poetry, painter and filmmaker. He lives in Pune. This piece also appears in today's The Indian Express