'Injury Days Are Over'

'I'm in full swing training and focused now. This year, the focus is on power build-up and few corrections in technique.' 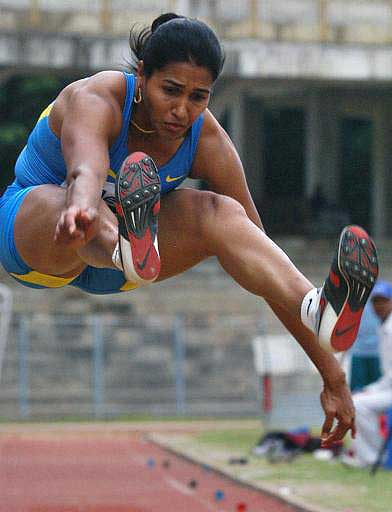 outlookindia.com
-0001-11-30T00:00:00+05:53
After a lean last year, ace long jumper Anju Bobby George is focusing on rectifying flaws in her technique and building power in a bid to contend for honours at the upcoming major events.

The lanky Keralite was dogged by a foot injury and illness throughout last season to led to a slip from the fourth spot in IAAF world rankings to number 31 at present.

"Injury days are over and I'm in full swing training and focused now. This year, the focus is on power build-up and few corrections in technique," Anju said in an interview.

The 29-year-old Anju has not started her competitive season yet after missing the season opening Indian Grand Prix in Patiala and the Federation Cup in Kolkata.

She also skipped the Doha Super Grand Prix where she participated last year as she was not satisfied with her level of preparation.

The Bangalore-based athlete plans to begin with the first leg of the Asian Grand Prix in Bangkok on June 19. The next two legs will be on home turf at Guwahati (June 23) and Pune (June 27).

The ace jumper, coached by husband Robert Bobby George, was last seen in action in the Doha Asian Games where she had to settle for the silver medal.

Now her eyes are firmly set on the two major competitions this year - the Asian Athletics Championships in Beirut, Lebanon, from July 29 to August 2 and the World Championship at Osaka, Japan (August 25-September 2).

"This year WC, Osaka, and Asian Champs, Beirut, are the focus. However, I will be jumping in few IAAF Super Grand Prix in Europe this year," Anju said.

Anju claimed to have recovered fully from her foot injury which hampered her performance for a major part of last year, including at the Melbourne Commonwealth Games, where she finished a lowly sixth.

The lanky athlete failed to live up to the standards she set for herself when she became the first Indian to win a medal at the World Championships by capturing bronze in Paris in 2003.

She went one better at the World Athletics finals at Monaco in 2005, a performance Anju considers her best.

However, the big goal remains the Beijing Olympics next year and she has worked out a long-term plan with the mega event in mind.

"All the preparation is a build-up for Beijing 2008," Anju, who finished sixth at Athens last time, said.

However, she will have to contend with the Russian pack of Tatyana Lebedeva, Oksana Udmurtova, Tatyana Kotova and Lyudmila Kolchanova and the likes of Australian Bronwyn Thompson (Commonwealth Games gold medallist).

The American duo of Grace Upshaw and Rose Richmond as well as Japan's Kumiko Ikeda will also pose a stiff challenge.

In the past, Anju had moved to the United States, Australia or South Africa for training but has of late decided to stay put at the Regional Centre of the Sports Authority of India in Bangalore for preparation.

'No Going by Past Laurels'