Responding to India's first-innings total of 250, Australia were all out for 235 to give the visitors a 15-run lead at the Adelaide Oval. 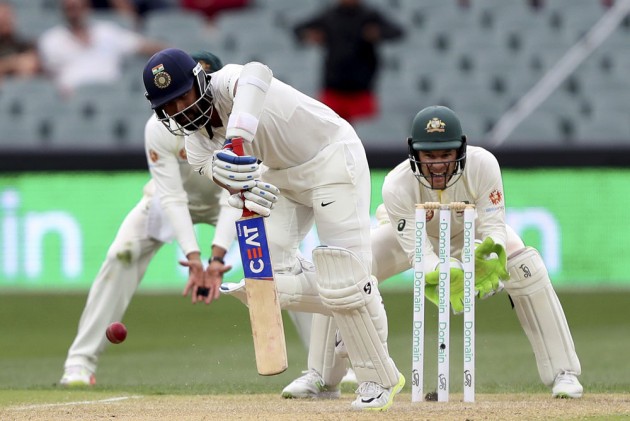 India were 151 for three at Stumps on the third day of the opening Test of Border-Gavaskar Trophy against Australia at Adelaide Saturday, extending their overall lead to 166 runs.

Skipper Virat Kohli and Cheteshwar Pujara came up with a steady partnership as India put themselves in a strong position. Pujara was batting on 40 while Ajinkya Rahane was on 1 at the other end.

Coming together after the fall of openers Lokesh Rahul and Murali Vijay, Pujara and Kohli added 71 runs between them to give the visitors a platform from which they now have the chance to go on and win the Test.

Kohli, who had lost his wicket to a somewhat careless shot in the first innings, employed a much more careful approach during his second essay.

The Indian captain was well on his way to what would have been a well-deserved half-century when he was outfoxed by some extra turn from off-spinner Natha Lyon a short while before stumps. This is the sixth time that Lyon has dismissed Kohli in the longest format of the game, the most in world cricket.

Kohli, who scored 34 runs off 104 deliveries, had tried to defend on the front foot, but the extra turn saw the ball take the edge of the bat before nestling in the hands of a delighted Aaron Finch at short leg.

Pujara, on the other hand, resumed from where he left off in the first innings. The Saurashtra batsman, who was run out after posting a gritty century in the first innings, put on yet another tenacious batting display and looks set to go on and register a big score.

For Australia, apart from Lyon, fast bowlers Mitchell Starc and Josh Hazlewood also picked up a wicket each.

Earlier, responding to India's first-innings total of 250, Australia were all out for 235 to give the visitors a 15-run lead at the Adelaide Oval.