The off-spinner took three wickets as India restricted Australia to 191/7 at the close of Day 2 to lead by 59 runs. Travis Head (61) and Mitchell Starc (8) were unbeaten. 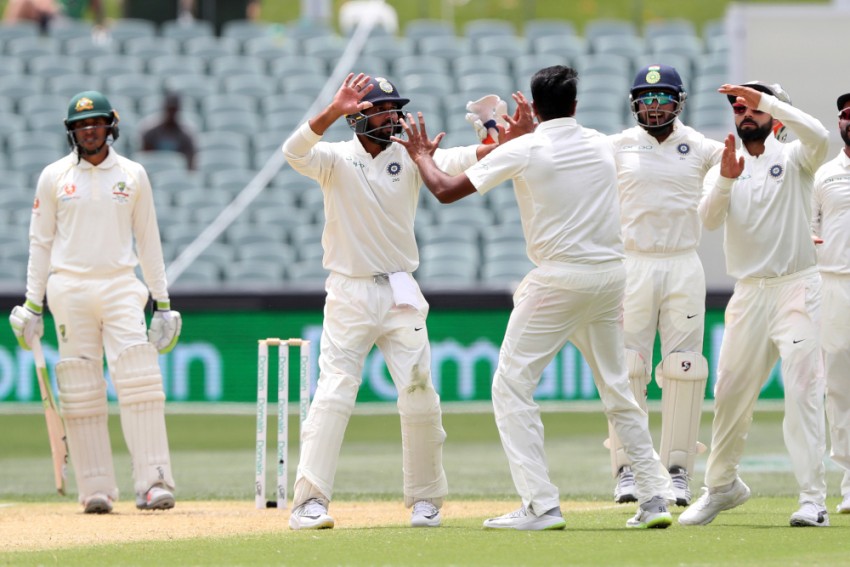 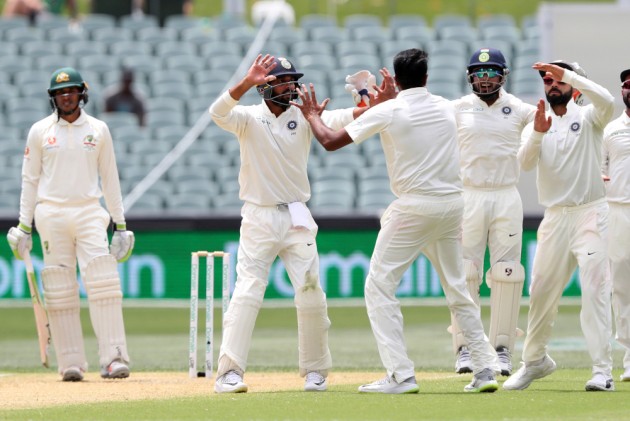 The off-spinner took three wickets as India restricted Australia to 191/7 at the close of Day 2 to lead by 59 runs. Travis Head (61) and Mitchell Starc (8) were unbeaten.

India were all out for 250 in their first innings in the morning session with Mohammed Shami out off the first ball of the day, bowled by Josh Hazlewood.

Jasprit Bumrah took the wickets of Peter Handscomb (34) and Pat Cummins (10), while Sharma removed Aussie captain Tim Paine (5) for his second scalp of the day.

But the day belonged to Ashwin and Aussie middle-order batsman Travis Head. Ashwin bowled an incisive spell that tied down the Australian batsmen, while Head batted with grit and determination to post second Test fifty.

In a hectic morning session, Ishant bowled Finch with a fuller, inswinging delivery, but Khawaja and Harris settled down to provide a solid start for the hosts. The duo batted out 20.4 overs and put on 45 runs for the second wicket, already higher than any partnership for the top-four Indian wickets.

Indian pacers bowled with fiery pace, with Bumrah even breaching the 150km/hr mark at one point. However, they bowled short of good length on most occasions and did not make the Australian batsmen play too many deliveries.

For their part, both Harris and Khawaja were content with leaving as many deliveries as possible and struck only four boundaries between them.

Ashwin was introduced into the attack in the 12th over of the innings, and immediately hit up an interesting duel with Harris. The cover drive came out against the spinner, expectedly as a few more runs started flowing.

Mostly they came off Bumrah, who erred in line and length. Even Mohammed Shami bowled a tad short of length as the batsmen contended him with ease. Shami though bowled only four overs in the session, and even called on the physio at one point, to look at his bowling hand for cramps. He was off the field for three overs thereafter but word from team management is that he is fully fit. Even so, he did not bowl again in the session.

Ashwin then struck before Lunch. Harris played on to his pads and was caught at silly point in the 22nd over, as the spinner got dividends for blocking all scoring opportunities.

Australia's 50 came up in the 27th over thereafter.

Then, Marsh gifted his wicket immediately after the resumption of Lunch break. In the very first over, he went for a wild slash against Ashwin, but ended up playing on as Australia were reduced to 59/3.

Khawaja and Handscomb then added 28 runs for the fourth wicket. The latter played some loose strokes at the start of his innings but got some streaky boundaries off Shami to help the scoring rate move along.

The big moment came in the 40th over, when Ashwin got Khawaja's wicket. The left-hander had been tied down, but he was content eating up deliveries. He pushed forward against Ashwin but gloved it to keeper Rishabh Pant.

India appealed, and then opted for DRS review with hotspot showing a faint tickle on Khawaja's glove as Australia were suddenly reduced to 87/4.

Head though joined Handscomb and defied the Indian bowlers, who did not allow any easy runs but also could not find another breakthrough before the tea break.

Handscomb struck five boundaries, while Head hit a four as well, as the duo put on 30 runs for the fifth wicket, taking Australia past 100 in the 48th over.

Earlier in the morning, Shami showed no patience, and went after a short delivery from Hazlewood (3/52) only to be caught behind down leg side, as India's first innings came to a quick end.