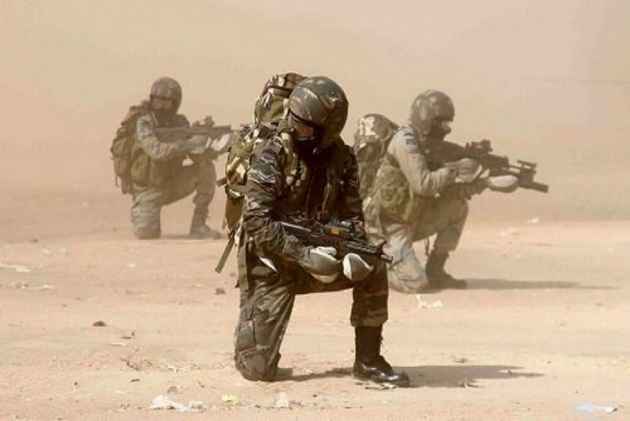 India is looking to boost its special forces capabilities, including cross-border counter- terrorist operations, by participating for the first time in a major military drill with the air forces of Israel and eight other nations.

The 45-member Indian contingent, including 16 Garud commandos, led by Group Captain Maluk Singh, is also closely working with Israel's select special forces during the Blue Flag aerial training exercise with focus on learning what makes them excel at special operations.

"We would look to learn and share with them the procedures followed in mutual interoperability, counter- terrorist operations, method of inducting and training people and try and compare to see if a course correction is required at our end," an Indian officer leading the Garud commandos told PTI.

"The Israelis are more battle-hardened as they have more experience in cross border operations and we can learn from their experiences," the officer said.

In a rare move, while contingents of other participating nations in the massive "war drill" feature fighter aircraft, the Indian Air Force (IAF) decided to send C-130J Super Hercules aircraft along with Garud commandos who will be training for a week each with Israeli Air Force's elite units - Unit 5101 (more commonly referred to as the Shaldag Commando unit) and Unit 669 (Airborne Rescue And Evacuation Unit).

The Garud commandos started training with Unit 669 on Sunday and would be moving to the Palmachim Air Force base next week to train with the Shaldag Unit.

Unit 669 was initially mandated to extract and provide medical treatment to downed (and possibly injured) pilots beyond enemy lines. However, in later years the unit also participated in extraction of soldiers of other arms of the Israel Defence Forces (IDF), especially Sayeret (Special Forces) fighters in operations beyond enemy lines.

Its operators undergo the longest training phase of any unit in the IDF, lasting 22 months, and training has a heavy emphasis on navigation.

The mandated role of Garud Commando Force, whose motto - 'Defence by Offence' - matches closely with the task assigned to these two special units of the Israeli Air Force.

"They are very strong as far as special forces are concerned. This is one area we are definitely looking to learn from their experience," Maluk Singh told PTI.

Israel is among the top three to four arms suppliers to India with sales ranging from Phalcon AWACS (airborne warning and control systems) to Aerostat and Green Pine radars, Barak anti-missile defence and several types of missiles and laser-guided bombs.

Lt Col Nadav, Commander of the 133rd Squadron (Knights of the Twin Tail), which operates 'Falcon' (F-15) fighter jets and is leading the exercise, described it as a "significant milestone in the relationship between the Israeli Air Force and international air forces".

"This exercise will allow us to continue cooperating with these forces in the future as well," he said.

Close to a 100 aircraft and more than a thousand support crew and pilots from the visiting air forces are taking part in the drill.

Israel also said "electronic warfare" will be used during the drills but no details were shared.

According to the Israeli army, the goal of the exercise is to both improve technical ability and to strengthen the "diplomatic cooperation between the countries".

The Blue Flag exercise was started in 2013 by Israel but its third edition has attracted huge attention given the massive participation.