The Indian Army soldiers dragged a dead militant by chains tethered to his legs, with people in Kashmir calling the act another instance of brutal human rights violation. 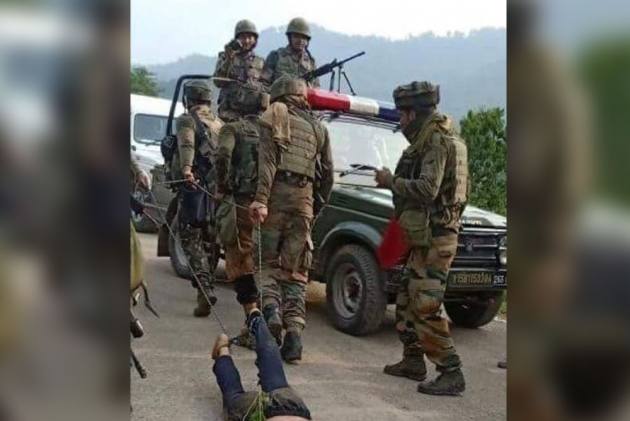 The Indian Army was accused of “barbarism” as pictures surfaced on Friday of soldiers dragging on a tarred road a dead militant by chains tethered to his legs, with people in Kashmir calling the act another instance of brutal human rights violation.

The army—already facing a raft of allegations over rights violations in the insurgency-hit state—has yet to issue a statement on the latest controversy that erupted after soldiers and policemen killed three militants at Dhirti village near the Kakryal area of southwest Kashmir’s Reasi district on Thursday morning.

The joint operation was conducted after militants fired at policemen in a café and escaped into the woods in Jhajjar Kotli along the Jammu-Srinagar national highway in Jammu district the previous day. The fugitives were later detected and engaged at Dhirti.

The photo of the militant, supine and facedown with soldiers pulling the chain tied to his legs, was widely circulated on Friday and attracted widespread condemnation.

Outlook tried contacting the Indian army, but hasn't received any reply yet.

Fellow activist Shrimoyee posted the picture with her comments: “Horrific images of desecration/ disrespect to bodies of enemy combatants killed in combat (gun battle with their Indian soldiers). This is a war crime.”

This is not the first time the army is facing allegations of mistreating dead militants. Shabir Hussain, an editor with a local English magazine, in his Facebook post writes: “This is a naked parade of Indian Army’s human rights record in Kashmir.”

A similar remark came from Hameedah Nayeem, who teaches English literature at the University of Kashmir. “The most barbaric conduct of the ‘most professional’ Indian Army. Have a look. Even the vilest person would respect the dead body. This conduct fetches awards and trophies in India! Any surprises?”

The “awards” were in reference to another controversy that drew international attention when it happened in April 2017. A video showed an army major driving a jeep with a man, a weaver who had gone to vote in elections, tied to the bonnet as a human shield against stone-throwing protesters. The officer was later decorated with a medal for his exemplary service in Kashmir.