Brazilian President Jair Messias Bolsonaro was the chief guest for this year's ceremony which started with Prime Minister Narendra Modi paying tributes to martyrs at the National War Memorial. 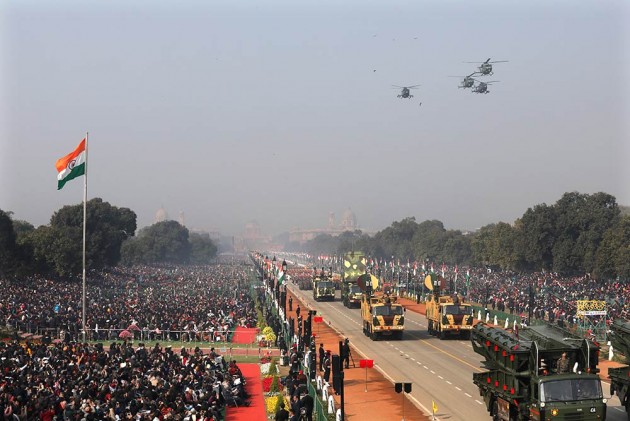 The nation celebrated the 71st Republic Day on Sunday with a grand military parade and exhibition of its history, cultural diversity and strategic weaponry at the Rajpath.

Brazilian President Jair Messias Bolsonaro was the chief guest for this year's ceremony which started with Prime Minister Narendra Modi paying tributes to martyrs at the National War Memorial.

This was the third time that a Brazilian president was the chief guest at the Republic Day.

There were several firsts in the celebration this year, including the prime minister paying homage at the National War Memorial, display of Chinook and Apache helicopters in the fly past and showcasing of the A-SAT weapons system.

Jammu and Kashmir, which participated in the parade for the first time as a Union Territory, had the "Back to Village'' programme for displaced Kashmiri Pandits as the theme for its tableau.

The band played the national anthem with a 21-gun salute in the background when the tricolour was being unfurled at the Rajpath before the start of parade.

Earlier in the day, Modi took to Twitter to extend his greetings to countrymen. "Wishing everyone a happy #RepublicDay. Jai Hind," he tweeted.

After Republic Day parade, he waved at the cheering crowd while walked on the Rajpath.

Twenty-two tableaux were on display during the parade, of which 16 were of various states and UTs and six were of ministries, departments and the National Disaster Response Force (NDRF).

The tableau of the Ministry of Jal Shakti showcased government's new initiative "Jal Jeevan Mission" which aims to provide a functional tap connection to every rural household by 2024.

The 'Dhanush' gun system, commanded by Captain Mrigank Bharadwaj, was part of the celebrations for the first time on Sunday. The gun with a maximum range of 36.5 km has the capability of automatic gun alignment and positioning.

Heavylift helicopter Chinook and attack helicopter Apache, both recently inducted in the Indian Air Force, took also part in the flypast for the first time.

The Chinooks can airlift diverse loads in remote locations. It is a heavy lift, twin rotor helicopter which has enhanced IAF's lift capability across a range of military and HADR missions.

The Apache, on the other hand, is a versatile helicopter capable of firing air to air and air to ground missiles, rockets and front gun aided through fire control radar which can unleash havoc on the adversary.

Keeping up with the pace of technical advancement in the 21th Century, the Corps of Signals has effectively achieved electronic and information superiority to empower the Indian Army against adversaries.