Prime Minister Narendra Modi was addressing at the launch of auction of 41 coal mines for commercial mining. 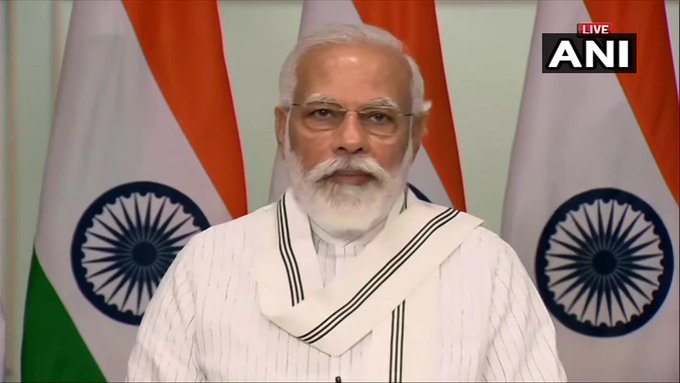 Prime Minister Narendra Modi on Thursday said India should be the world's largest coal exporters considering the size of reserves it has and unlocking of coal mining for commercial players is a step in that direction.

Launching the virtual auction process of 41 coal blocks for commercial mining, expected to garner Rs 33,000 crore of capital investment in the country over next 5-7 years, the Prime Minister said it is a major step in the direction of achieving 'self-reliance'.

He also said that the coronavirus pandemic has taught India to be self-reliant.

The launch of the auction process not only marks the beginning of unlocking of the country’s coal sector from the “lockdown of decades”, but aims at making India the largest exporter of coal, PM Modi said.

Despite being the world's fourth largest producer at present, he said India is the second-largest importer of the dry-fuel.

The PM further said, "To make India self-reliant in the energy sector, a major step is being taken. In the near future, we will be the major exporters of the products that we import now ".

He said, "India will turn this COVID-19 crisis into an opportunity. It has taught India to be self-reliant and we will reduce our dependence on imports."

The Prime Minister also said that the government has set an aim of gasification of 100 million tonnes of coal by 2030 with an investment of Rs 20,000 crore.

"We have kept an aim that by the year 2030, which means in this decade, around 100 million tonnes of coal should be gasified... For this, four projects have been identified and in them around Rs 20,000 crore would be invested," he said.

Lambasting past policies of keeping the sector closed and pointing out towards controversies and scams that shrouded the sector in the past, he said now there is full transparency in auctions with a wide set of reforms.

"For decades, the country's coal sector was entangled in a web of captive and non-captive. It was excluded from competition, there was a big problem of transparency. Major scams had taken place in coal auction earlier, but the system has been made transparent now," he said.

Reforms done will have a positive impact on power, steel, fertiliser, aluminium and cement sectors, he said and added reforms in the coal sector will benefit the eastern and central India, the regions rich in coal and minerals which houses many aspirational districts.

Commercial coal block auction will be a win-win for industry users, he said and added that with this move, the government has opened up coal and mining sector to competition, capital and technology.

The PM said that this auction process will result in major revenues to states and create employment.

"The coal blocks that are getting auctioned will provide lakhs of jobs in these areas. The government will spend Rs 50,000 crore for creating infrastructure around coal mining. In a way poor and underprivileged will be served through coal," he said.

Th  commencement of auction process of these blocks, part of the series of announcements made under 'Atmanirbhar Bharat Abhiyan', is likely to contribute Rs 20,000 crore revenues annually to the state governments.

In line with the Prime Minister's self-reliance call, the aim behind the auction process is to achieve self-sufficiency in meeting energy needs and boost industrial development.

The government has taken an important decision to open up coal, mining sector to competition, capital and technology, he said.

Coal and Mines Minister Pralhad Joshi, who was also present during the launch event, said Rs 50,000 crore is being invested in the sector to jack up India's coal output to 1 billion tonnes.

Upon attainment of peak rated capacity of production of 225 million tonnes (MT), the government said, these mines will contribute about 15 per cent of the country’s projected total coal production in 2025-26.

Finance Minister Nirmala Sitharaman, while announcing the stimulus package for the coronavirus-hit economy, had said coal mines would be auctioned to the private sector for commercial mining to end reliance on imports and improve local production.

The methodology approved by the CCEA provides that bid parameter will be revenue-share, the government had said.