Home  »  Website  »  National  »  Will Not Let Centre Bow Its Head In Shame But We Demand To Know Why Farm Laws Can’t Be Repealed: BKU

Will Not Let Centre Bow Its Head In Shame But We Demand To Know Why Farm Laws Can’t Be Repealed: BKU

‘What’s the compulsion of the government that it is adamant on not repealing the new farm laws?’ asked Bharatiya Kisan Union leader Rakesh Tikait 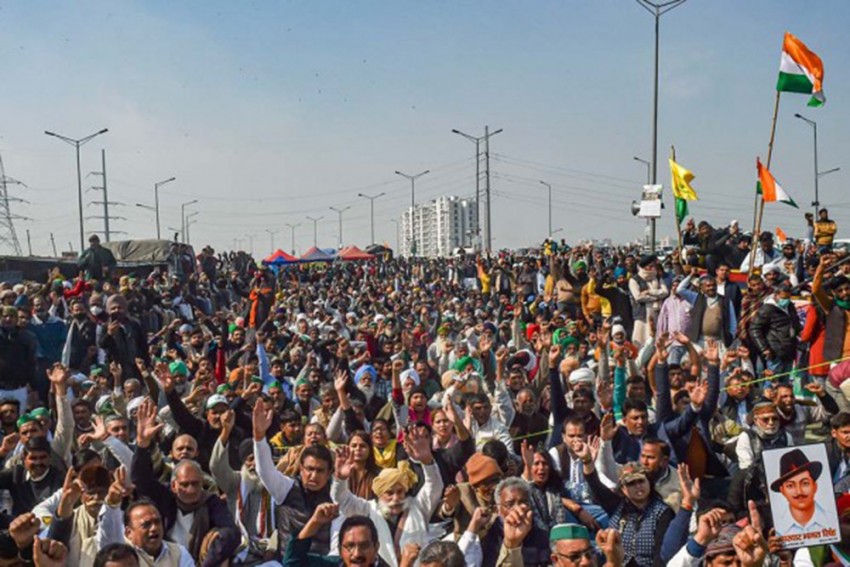 Farmers raise slogans at Ghazipur border as they observe a hunger strike on Mahatma Gandhi's death anniversary, during their ongoing agitation against Centre's farm reform laws, in New Delhi.
PTI
Outlook Web Bureau 2021-01-31T08:05:59+05:30 Will Not Let Centre Bow Its Head In Shame But We Demand To Know Why Farm Laws Can’t Be Repealed: BKU 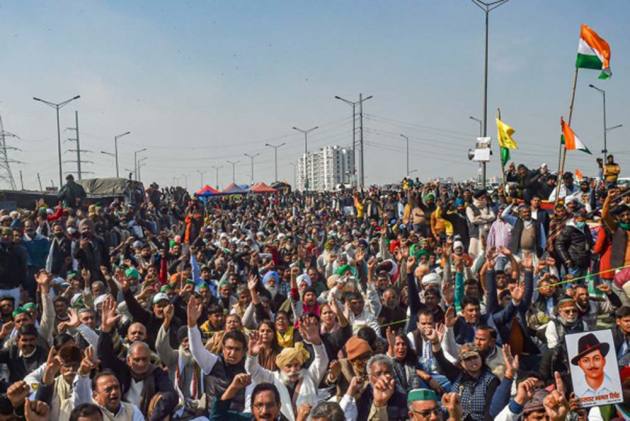 Intensifying their protests against the Centre’s recent agriculture legislations, farmers in the national capital on Saturday sought to know why the ruling BJP dispensation could not repeal the contested farm laws.

This comes in the backdrop of the Ministry of Home Affairs (MHA) announcing it decision to suspend internet services in areas located near the farmers’ protest sites at Tikri, Singhu and Ghazipur borders outside the national capital. Read more

Meanwhile, Bharatiya Kisan Union (BKU) leader Rakesh Tikait on Saturday asked the Centre to explain to farmers why it does not want to repeal the three farm laws, while promising it that they (farmers) “will not let the (Indian) government bow its head” before the world.

TIkait appeared to make the conciliatory offer to the government from a position of strength amid swelling support for the farmers' stir with hundreds of villagers pouring in at the key protest site-- Gazipur’s UP Gate located at the Delhi-Uttar Pradesh border.

“What is the compulsion of the government that it is adamant on not repealing the new farm laws?” asked Tikait, who has overnight emerged as a potent face of the farmers’ stir following his emotional appeal to the farming community against leaving the protest site.

“The government can tell its reasons to farmers and we (farmers) are the kind of people who believe in the panchayat system. We will never let the government bow its head out of shame in front of the world,” Tikait said, apparently striking a conciliatory note.

“We have an ideological fight with the government, something which can neither be fought with sticks and guns nor suppressed by them. The farmers will return home only when the new laws are repealed,” the BKU national spokesperson asserted.

The younger son of Bharatiya Kisan Union’s late president Mahendra Singh Tikait, made the assertion with hundreds of villagers, including women and children reaching the protest site at Delhi’s eastern border on Saturday – some with water and homemade food and others with buttermilk -- in a symbolic show of support for protestors.

The day also saw more politicians throwing in their weight behind the Tikait’s growing strength and meeting him at the protest site.

The BKU-led protest against the Centre's new farm laws appeared to be fizzling out following the Republic Day violence that was witnessed in Delhi, but more protestors joined the stir after a 'mahapanchayat' of farmers took place on Saturday in Muzaffarnagar.

Addressing the protesting farmers, Tkait said farmers believe in the Gandhian principle of non-violence and have full faith in the Constitution and appealed to everyone to maintain peace.

“The farmers won't mind if the police baton-charge them but if goons of political parties dare touch them, neither the farmers nor their tractors would leave the site,” he asserted.

“The tears that I shed the other day were not mine but of all farmers,” he added, imparting an emotional edge to his address.

Politicians continued to reach the protest site at UP Gate for a second day, even as Tikait insisted that no political leader would be allowed on the central platform and meetings with them would happen only off stage.

The political leaders who met Tkait on Saturday and extended their support to him included Indian National Lok Dal leader Abhay Chautala and Gujjar leader and former MLA Madan Bbhaiyya.

Tikait's spiritual guru and founder of Neelkanth Ashram Amit Maharaj also reached the protest site, carrying Gangajal for him. He gave the holy water to Tikait to consume and blessed him, paying God to give him the strength to transform the stir into a “mega movement” of farmers.

Khatana said there has been continuous support for the "peaceful protest" against the farmers' demand for removal of the new farm laws.

Asked about the estimated crowd size at the site, he said, "Farmers are coming in to show the solidarity and leaving. It is not a stagnant crowd."

The Delhi Traffic Police said to-and-fro movement on the National Highway 24 (Delhi-Meerut Expressway) has been closed.

“Three super zonal magistrates, 14 zonal magistrate and 34 sector magistrates from the administration besides senior police officers are on the ground where law and order is under control,” Ghaziabad District Magistrate Ajay Shankar Pandey told PTI.

“Mobile toilets have been stationed at the protest site and water facilities have been restored,” he said, adding the situation was being monitored at the border.

Internet services, however, will remain suspended till Sunday night in view of the Centre's order to “maintain public safety and averting public emergency”, the administration said.

Around 3,000 security personnel including those from the Provincial Armed Constabulary (PAC), Rapid Action Force (RAF) in anti-riot gears and civil police, were deployed at the protest site, according to officials.

Change How You Think, Not Just The Rifles