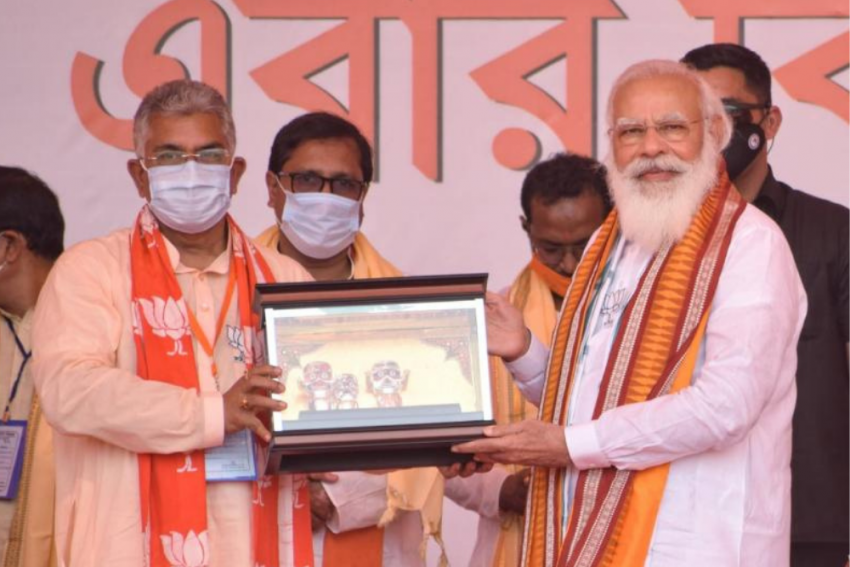 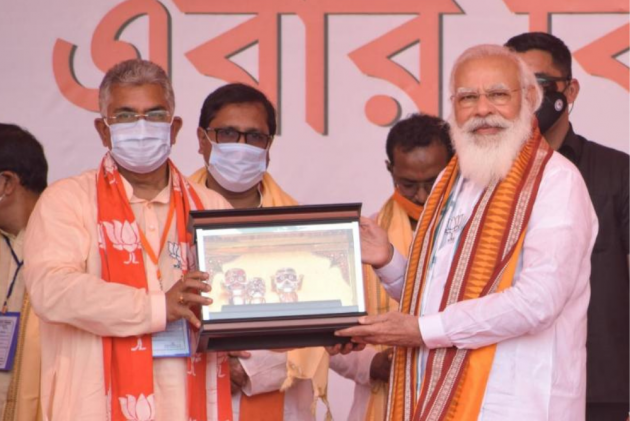 "Why am I so sure that we are coming to power? It's a matter of pride that we have a leader like Dilip Ghosh. To ensure the party's need, he did not take a peaceful sleep. He didn't care about Mamata Banerjee's threats. He remained undaunted even in the face of life-threatening attacks and worked to ensure the party's growth," Modi said on Saturday while addressing a public meeting at Khargpur in West Midnapore district.

Khargpur is considered Ghosh's stronghold. He hails from the same district and, in 2016, emerged as a giant killer in state politics by defeating the Congress' 11-time MLA, the legendary gentleman-politician Gyan Singh Sohan Pal. However, the seat fell vacant in 2019 after Dilip Ghosh got elected to the Lok Sabha. In the subsequent Assembly by-election, the TMC bagged the seat. The BJP has now fielded actor Hiran Chatterjee from the seat and it appears that reclaiming the state unit chief's old constituency is a matter of the party's prestige.

However, the BJP's state unit leaders believe Modi's praise of Ghosh has little to do with the result of Khargpur seat and more with the equations over the probable chief ministerial candidate.

The party has fielded almost all senior leaders in the state unit, including national vice president Mukul Roy, union minister Babul Supriyo, Lok Sabha MPs Locket Chatterjee, Nishith Pramanik and Jagannath Sarkar, along with the party's central thinktank members Swapan Dasgupta, who resigned from Rajya Sabha to contest in the elections, and Anirban Ganguly, a member of the BJP's central policy research wing and biographer of Amit Shah.

According to a senior leader of the party who did not want to be named, fielding these candidates was part of the party's attempt to give the people of Bengal a hint of the ministry that the BJP would have in the state should they win the elections. The party has also nominated former TMC ministers Suvendu Adhikary and Rajib Banerjee from their own seats.

However, another leader, said that the candidate list also created a cold tension among the BJP's leadership in Bengal, as while fielding so many MPs and even the reluctant Mukul Roy, the party did not give a ticket to Dilip Ghosh. The BJP central leadership entrusted him with leading the campaign.

The party had not named any chief ministerial candidate, giving rise to many speculations about the probable faces.

Among the names doing the rounds are that of Swapan Dasgupta, Babul Supriyo, Mukul Roy and Locket Chatterjee. Of course, Ghosh's name has been the most discussed among party workers and political observers. Recently conducted opinion polls reveal Ghosh is the second most popular choice among the people of the state as the preferred chief ministerial candidate after Mamata Banerjee, though a distant second.

These developments were analysed by Bengal BJP leaders in various ways. Speaking to Outlook on condition of anonymity, a Lok Sabha member said, "The first message that can be read is that the party didn't want to give any such impression that Ghosh could be the chief ministerial candidate. This message would have certainly spread had he been given a ticket, whereas the party wants to keep Modi's face against Mamata Banerjee's."

Such murmurs within the party was also likely to reach Dilip Ghosh. The list might have created an impression that Ghosh was out of the race, a state unit leader said.

"It seems that by heaping praises on him, the prime minister ensured that Ghosh had his morale high," said the Lok Sabha member.

If that was the intention, indeed, the prime minister had succeeded in his bid. "My responsibilities became even greater after what he said. I have to work even harder. In any case, our party and the organisation I come from (the RSS) have always taught me the principle of nation first, party second and individual third. I am a proud believer in this principle," said Ghosh, a former RSS pracharak (whole-timer) who took charge of the party's Bengal unit in 2015.

Ghosh also said that he was in no kind of competition with anyone. "My only concern is fulfilling the responsibilities I have been entrusted with," he said.

Nevertheless, Ghosh's followers in the state unit were rejuvenated. One district unit president who comes with a background in the RSS said he believed Modi had dropped the biggest hint about the chief ministerial candidate by praising Ghosh publicly, something that he has not done for most other leaders of the party.

"Ghosh can win a byelection and enter the Assembly after we have gained majority," the district unit president said.