‘We Will Form An alliance With Farmers And Poor’: Congress Leader Ajay Kumar Lallu On UP Polls

The Congress will contest all 403 Uttar Pradesh Assembly seats and the party's CM candidate will be decided by the party high command, UPCC chief Ajay Kumar Lallu said 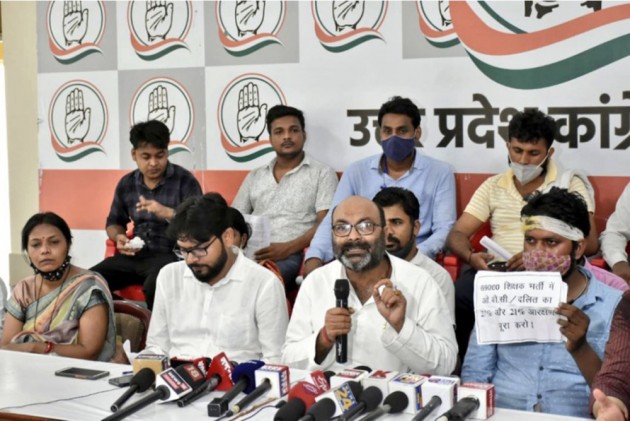 Uttar Pradesh Congress Committee (UPCC) chief Ajay Kumar Lallu is in the thick of action as far as the Congress party’s efforts to forge a revival in Uttar Pradesh ahead of the 2022 Assembly elections are concerned. He spoke to Syed Kamran in the context of Priyanka Gandhi Vadra’s visit to the state to kick off the Congress’s election campaign. Excerpts:

Q) In view of the 2022 Assembly polls in Uttar Pradesh, all political parties are finalising their strategies. How does the Congress plan to fight this battle?

In UP, our numbers might be less in the Assembly, but we have emerged as the strongest Opposition on the ground. Under the leadership of Priyanka Gandhi ji, we are constantly fighting on the streets over basic issues: law and order, women’s safety, unemployment, farmers’ crisis, etc. We even took to the streets against Covid mismanagement and CAA-NRC. Inflation is one of the biggest issues facing us now. I am very happy to tell you that over one lakh Congress workers courted arrest, over 20,000 workers have been jailed for three days to three months fighting against the government’s repression. To fight for justice for the daughters of Hathras, Unnao, Shahjahanpur or the tribals, Priyankaji herself took to the roads. We also did kisan mahapanchayats for raising the issues of the farmers.
The Congress has been continuously engaged in strengthening its organisation and you can see in 840 blocks, we had 8,135 nyaya panchayats. The constitution of 59,000 gram sabhas has just started and today the party is working strongly as an organisation in UP.

Q) How many seats will the party contest?

Q) Who will be the Congress’ chief ministerial face? Priyanka Gandhi? Or will the party contest elections without a CM face?

This will be decided by the central leadership.

They have to decide. The decision is made at the CWC level. It’s the right of the party president to decide the CM face.

A couple of days back when Priyanka Gandhi visited Lakhimpur, Zafar Ali Naqvi was present there. Coming to Bareilly, Praveen Singh Aron himself staged a protest against rising fuel prices recently. As far as Sri Prakash Jaiswal and Nirmal Khatri are concerned, both are constantly engaged in strengthening the party. They are participating in various party programmes and working their fullest.

He wasn’t well and he already called to intimate us that had he been fit, he would definitely have come.

Q) The Congress’s voteshare has continuously gone down in the state, it has dipped close to about 6 per cent. Who do you think is responsible for this?

I do not agree with your views, I believe you should change your perception about it. The Congress voteshare is on the rise…we came second in five out of nine Assembly bypolls. We polled over 1 crore votes in zila panchayat elections. So, tell me, is that a decrease or increase? In fact, our voteshare is continuously increasing while that of other parties is continuously falling.

Q) For how many seats have the names of candidates been finalised?

The process is still under way. It will be decided by the party’s central election committee.

Q) Are there any talks of alliance with any small or big political parties in the state?

No. It’s very clear that the Congress will form an alliance with the poor, the farmers, the youth, the citizens. We will contest firmly on the strength of the organisation.

See, last time when the Assembly elections were held, over 300 parties contested. In a democracy, everyone has the right to contest.

Q) Two BSP stalwarts from Ambedkar Nagar, Ram Achal Rajbhar and Lalji Verma, were expelled from the BSP. Did they try to get in touch with the Congress or vice versa?

Q) How do you see the role of SP as the main Opposition party?

The SP can nowhere be seen on the roads. They didn’t even stand for the basic issues of the public. Recently, whatever happened with the Samajwadi sisters in Lakhimpur, their party leaders didn’t even stand with them. It was Priyanka Gandhi ji who went to meet them. These are the values and beliefs of the Congress. We don’t see parties; we fight to protect the interests and dignity of the people.

Q) What’s your opinion of those who switch parties, like Annu Tandon and Jitin Prasada?

This is nothing new. The ones who were given everything by the party betrayed the party.

Q) When is Priyanka Gandhi scheduled to shift her base to Lucknow? How many new cadre does the Congress aim to connect with before the elections?

She’s mostly in Lucknow with the people of the state.

Thousands are joining the party every day. I think Congress is the party with the highest new membership in the last few days.

Q) Will Rahul Gandhi be seen campaigning for the party in the upcoming polls?

Of course, he will.

Q) Will Rahul Gandhi again contest from Amethi in 2024?

This is to be decided by the central leadership.

Q) Recently, reports surfaced that Prashant Kishor may join the Congress. Will he have some sort of role in UP too?

As of now he isn’t in the party, nor has he yet taken the membership of the party, so it is not right to discuss him.

Q) Noman Masood recently left the Congress to join RLD. You spoke of how the Congress came second in many bypoll seats, he was one of those. He also came second position in the 2017 assembly elections too. What do you think about his move?

The biggest issues in UP today are women’s safety, unemployment, inflation and Covid management. We must get the government to work towards arranging for medicines, ventilator beds, oxygen, all that.

Everyone has the right to contest elections.

Q) What’s your opinion on healthcare, education and police administration in UP?

See, I believe this government has failed on every front. The state of healthcare is so saddening that there aren’t enough doctors at CHCs and PHCs, not even support staff. The government is not filling the vacancies. Medicine shortage, lack of infrastructure is an issue of serious concern. During the second wave, most people died due to non-availability of oxygen. If a country that manufactures vaccines and oxygen faces vaccine and oxygen shortage, it’s really an issue of concern. The government is engaged in headline management, branding and publicity. It has no connect with the people of the state. Law and order has failed, the government is protecting criminals. If you remember, Inspector Subodh was murdered and the accused were sent to jail. Upon their release, they were garlanded and felicitated by people from the BJP. The police are acting like puppets of the government. They have resorted to repression. Coming to education, this government has completely demolished the system, I believe today the children of the poor are unable to get proper education. There aren’t enough teachers in primary schools, education is getting costlier with only private schools being promoted. It’s a worrying situation. Government schools aren’t getting enough support and attention.