At least nine tourists are feared dead and four injured when a rockslide from the high mountains of Sangla valley hit a tourist vehicle which was on its way to Chitkul.

Terrifying video footage of a landslide in  Sangla, in Kinnaur district of Himachal Pradesh shows large chunks of rocks breaking off a mountain top and rolling down into the valley below.

At least nine tourists are feared dead and four injured following the freak rockslide from the high mountains of Sangla valley. The rocks tumbled down the mountain and hit a tourist vehicle that was on its way to Chitkul, a popular tourists spot in the Kinnaur district of Himachal, about 245 km from Shimla. According to some reports, nine tourists were feared dead and that the rockslide was caused due to the collapse of the Batseri bridge in Sangal Valley.

Chief secretary Anil Khachi confirmed the nine deaths along with damage to the Batseri bridge and a 200-meter highway patch.

Valley bridge Batseri in Sangal valley of Kinnaur collapses: Nine tourists from Delhi NCR are reported to be dead and three others are seriously injured pic.twitter.com/gTQNJ141v5

With monsoons wreaking havoc in the state just last week, tourists had reportedly been advised by local authorities not to venture towards destinations prone to accidents. Some tourists, however, managed to evade the police and were heading to Chitkul, an official from Sangla.

According to details released by police, four women and five men were killed in the accident. The list has been published in full below: 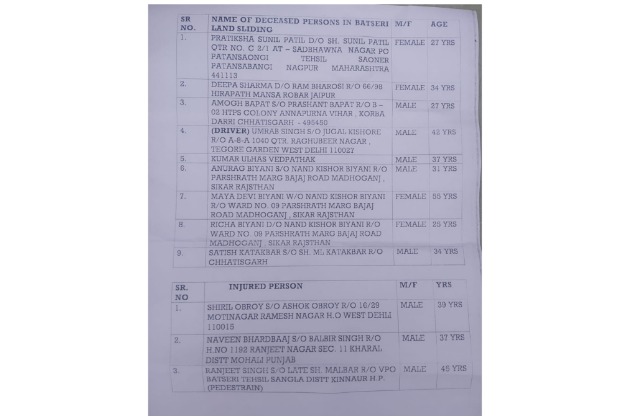 Senior officials including Deputy Commissioner Abid Hussain have rushed to the spot as emergency operations to trace the bodies and provide relief to the injured have already started.

The incident took place around 2.15 pm on Sunday when the rock boulders suddenly started rolling down from the high mountain.

The panic spread all over the place as some travellers also raised the alarm about safety as the rocks struck pedestrians on the road.

A bridge on the Baspa river was also smashed by the high-speed boulders and rocks as massive damage was caused to the houses and buildings.

Only Saturday Director General of Police Sanjay Kundu had taken to social media and also tweeted a warning for the tourists to avoid travels to risk-prone mountain valleys and also destinations close to the rivers.