A bench by Chief Justice of India may consider appointing a committee to inquire into the encounters of Vikas Dubey, his aides as well as the killing of eight Uttar Pradesh policemen by the gangster. 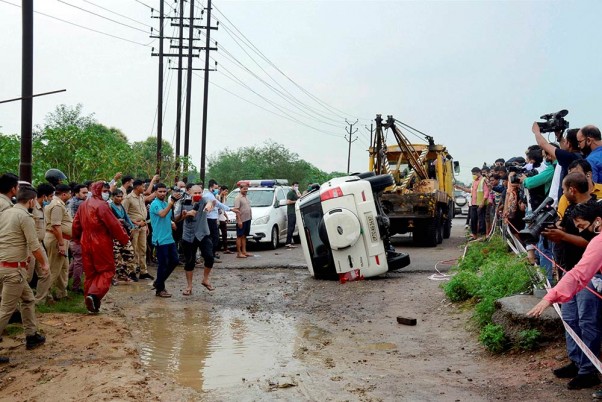 The Uttar Pradesh government told the Supreme Court Tuesday that it would file a status report on encounters of gangster Vikas Dubey and his associates.

A bench headed by Chief Justice S A Bobde said it may consider appointing a committee headed by a former judge to inquire into the encounters of Dubey, his aides as well as the killing of eight Uttar Pradesh policemen by the gangster.

The apex court said it would hear on July 20 the pleas seeking court-monitored probe into the encounters.

The bench, also comprising Justices R S Reddy and A S Bopanna, observed that monitoring of investigation is something which the court is very reluctant to do.

The top court said it may consider doing something similar to what was done in the case of encounter of four accused in the gang-rape and murder of a veterinarian in Telangana, in which the apex court had appointed inquiry commission headed by a former apex court judge.

Solicitor General Tushar Mehta, appearing for Uttar Pradesh, told the bench that the state has taken the matter seriously and would file a status report by July 16 detailing the steps taken by the authority.

Four policemen, including an inspector posted in Nawabganj, were injured in the accident, IG, Kanpur Range, Mohit Agarwal had said.

The police claimed that Dubey, the prime accused in the ambush in which cops were killed, was rushed to the hospital where he was declared dead.

One of the pleas filed in the apex court by advocate Ghanshyam Upadhyay has sought registration of an FIR and an apex court monitored probe by the CBI into the encounter of five co-accused, who were alleged to be associated with Dubey in the killing of policemen.

Another petition was filed by Delhi-based lawyer Anoop Praksah Awasthi, who has sought a court-monitored probe by CBI or NIA to "investigate/probe and prosecute the police-criminal-politician nexus in the killing of 8 police personnel in Uttar Pradesh...and every killing in encounter by police of the gang members of Vikas Dubey including his own killing on July 10".

The petitions filed by Upadhyay, Awasthi and another plea related to the matter was listed for hearing before the bench on Tuesday.

The plea, filed by Upadhyay, has referred to media reports and claimed that encounter of five co-accused by the police is "not only extremely illegal, inhuman, but also it is shocking to the conscience of the court and is nothing but Talibanisation of the country, which cannot be countenanced at all".

It has also sought a direction to the Uttar Pradesh government and the police to register FIR for demolition of residential building, vehicles and other properties of Dubey and also regarding encounters of the co-accused.

Besides these petitions, a police officer, who has been suspended and arrested for his alleged role in passing on crucial information about the raid to nab Dubey, has also approached the apex court seeking protection citing the spate of encounters in which the gangster and his aides were killed.

The plea, filed through his wife Vinita Sirohi, apprehended that her husband Krishna Kumar Sharma may be eliminated through “illegal and unconstitutional means”.

Sub-inspector Sharma, along with three others, was suspended on July 5 for his alleged involvement in passing on information to Dubey about police movement towards his house in Kanpur district to arrest him.

Separately, an NGO, People's Union for Civil Liberties, has also moved the top court seeking an SIT probe into the killing of Dubey and his two aides in Uttar Pradesh, saying the police version of the encounter of the gangster "raises many serious questions".

PUCL, which had earlier moved the top court seeking an SIT or CBI probe into UP police encounters between January 2017 and March 2018, has filed a fresh interim plea in its pending PIL urging the court to set up a panel headed by a former SC judge to probe the encounters and the nexus between criminals and politicians.

While on July 3, two of Dubey’s alleged associates, Prem Prakash Pandey and Atul Dubey, were killed by police in an encounter in Kanpur, on July 8 the police killed Amar Dubey, who carried a reward of Rs 50,000, in Maudaha village in Hamirpur district.