The video shows mounds of garbage bags piled up, overflowing dustbins and plastic bottles lying around in a hospital in Uttar Pradesh Etawah where Coronavirus patients are being treated. 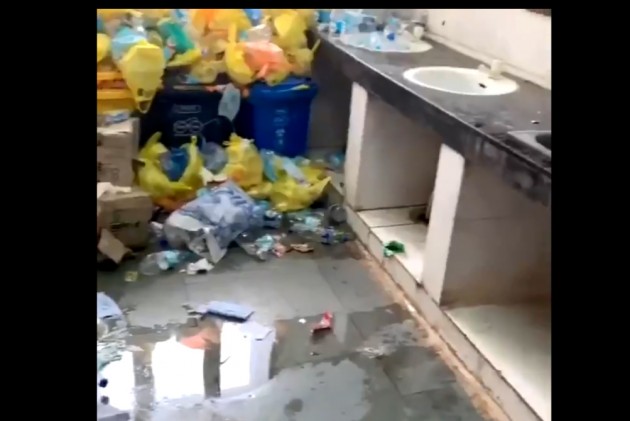 Senior government officials on Sunday inspected a hospital in Uttar Pradesh's Etawah, where Coronavirus patients are being treated, after a video, widely shared on social media, showed mounds of garbage in washrooms and corridors.

The video made it to social media on Saturday and sparked criticism after the patient, who shot the video, showed garbage piled up in Uttar Pradesh University of Medical Sciences, abour 224 km from state capital Lucknow, NDTV reported.

The criticism on social media prompted the authorities to rush to the hospital the next day and take stock of the situation.

There seems to be no end to shocking videos coming out of UP , related to #Covid_19india . This one is reportedly from outside a COVID 19 ward at a govt medical college in Etawah. Its unbelieveable , the amount of garbage . Govt has acted , reaction in next tweet ... pic.twitter.com/Sfh3O9ahoe

"There are shortcomings. The Vice-Chancellor of the university told me that the areas are cleaned just once a day. So I have directed that it happens twice a day. The second thing is that food is not being given on time to the patients. I have asked the Vice-Chancellor to ensure that the food is supplied on time," NDTV quoted Rajaganapathy Raju, an IAS officer posted in Etawah, as saying.

The video shows mounds of garbage bags piled up, overflowing dustbins and plastic bottles lying around.

The patient who shot the video can also be heard complaining about the lack of washrooms and violation of norms of social distancing. He says that there are mere two washrooms for 40 patients.

The video shows the unhygienic condition of the washrooms and the wards.

Earlier, a video surfaced that showed at least 69 patients waiting outside the gates of the same hospital for nearly an hour after they were brought there from Agra.