The other top leaders who have been booked are Dola Sen, Bratya Basu, Kunal Ghosh, Subal Bhowmik, and Sri Prakash Das

The Tripura Police have registered an FIR against Trinamool Congress MP Abhishek Banerjee and five other leaders of the party on charges of obstructing the police from performing their duty. The FIR has been filed based on a suo motto complaint by Inspector Manoranjan Debbarma, officer-in-charge of Khowai police station.

The other top leaders who have been booked are Dola Sen, Bratya Basu, Kunal Ghosh, Subal Bhowmik, and Sri Prakash Das for allegedly misbehaving with Additional SP and SDPO Khowai and preventing them from discharging their duty.

Banerjee along with other TMC leaders visited Tripura to get 14 party supporters released. They were allegedly arrested by police illegally on allegations of violating Covid norms.

Debbarma claimed that the TMC leaders misbehaved with Additional SP Khowai and SDPO, Khowai and started shouting in his chamber. 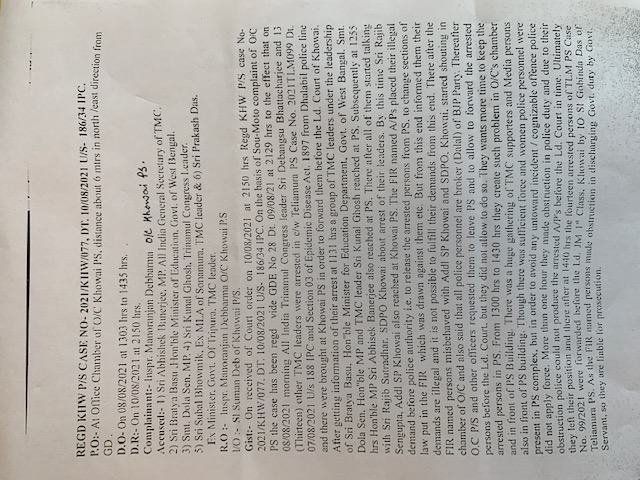 The police officer also complained that due to interference of the Trinamool leadership, they couldn’t send the arrested persons to the court on time.

Meanwhile, Malay Ghatak, West Bengal Law Minister said that police are under the pressure of the ruling BJP have falsely lodged the FIR.

Ghatak added that all allegations are baseless as the entire incident took place in front of large number of media persons.