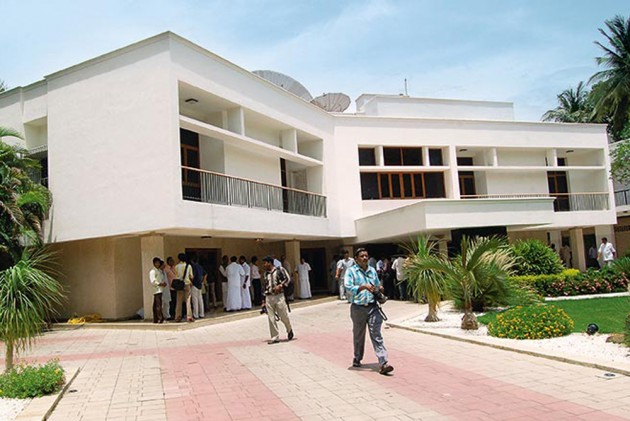 In a surprise development, the Tamil Nadu Governor Banwarilal Purohit on Friday promulgated an ordinance to enable the state government to take temporary possession of “Veda Nilayam”, the palatial bungalow of former Chief Minister J Jayalalithaa and also take control of movable items to convert the house into a memorial.

The ordinance has also permitted the state government to establish the 'Puratchi Thalaivi Dr J Jayalalithaa Memorial Foundation' for making long term arrangements for the conversion process. The reason cited for the urgency of the ordinance was that the building including movable items such as furniture, books, jewels, etc. were in a state of disuse for more than three years. "So, the government decided to transfer all the immovable and movable properties to the government for its upkeep until the acquisition process is complete," it states.

The takeover comes even as the Madras High Court is hearing pleas from Jayalalithaa’s nephew Deepak and niece Deepa seeking Letter of Administration (LoA) to manage the properties left behind by Jayalalithaa, including the Poes Garden residence Veda Nilayam. Deepak claimed he wanted to use the property to settle his aunt’s debts – Rs. 40 crores to the income tax department and Rs. 20 crores for a bank loan. Deepa alleged that the state government was trying to take possession of the building and surrounding area that measured 24,000 square feet located in a posh locality for a mere Rs. 38 crores when its actual market value was Rs. 100 crores.

The real reason for the hurried possession of the bungalow could be aimed at preventing Jayalalithaa’s close friend Sasikala Natarajan from reoccupying the building on her release from a Bangalore jail after her prison terms in the wealth case ends. Sentenced for four years, Sasikala’s jail term which began in Feb 2017 should come to an end in January 2021 after the 40 days she had spent in jail in 1996 after her arrest and upon conviction by the trial court in 2014 are taken into account. And if earned leave and good behaviour are taken into account, she could be released as early as September this year, her lawyers said.

So the possession of the building and its administration by the foundation, to be headed by Chief Minister Edappadi Palaniswami, Deputy Chief Minister O Panneerselvam, Information and Publicity Minister Kadambur Raju and government officials, would prevent Jayalalithaa’s famous friend from stepping back into the hallowed grounds. It was from here she had taken over as general secretary of the AIADMK after Jayalalithaa’s death in December 2016 and was about to become Chief Minister as well when the Supreme Court sent her packing to the jail in the disproportionate assets case in which Jayalalithaa was the first accused. Two of Sasikala’s relatives also accompanied her to prison.

In June 2019 the state government had published a notification for the acquisition of the land and building of “Veda Nilayam” but could not take physical possession due to the court case by Deepa and Deepak. Hence the need for the ordinance, an official explained.