On Monday morning, newspapers of Jammu and Kashmir, had doctor’s name flashed all across. The relatives say they were shaken as for the next three days, no one bothered to test any of the family member. 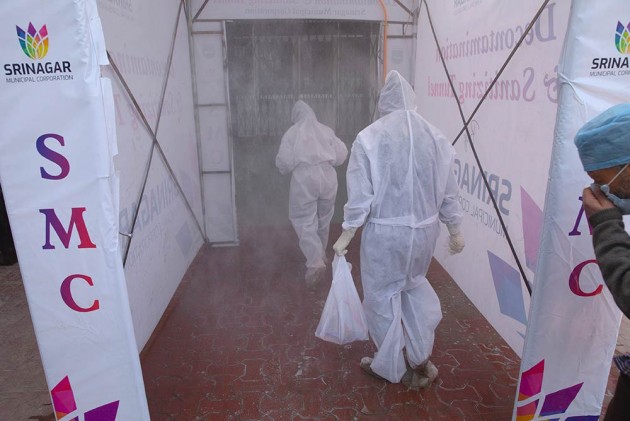 When an Assistant Professor of Microbiology at the Government Medical College, Jammu, resumed his duty after he finished being part of the coronavirus testing team, he felt uneasy.

He was part of the coronavirus team -- from March 13 to March 19 -- testing people having COVID-19 symptoms. He sought leave from his duty on Friday, March 27 and came home. However, his condition, despite taking medicine didn’t improve. He still had fever and he was shivering. On Sunday March 29, the doctor informed the Head Department Microbiology, GMC Jammu that he be tested for coronavirus since he had dealt with patients and had shown no signs of improvement.

He was tested and informed later on Sunday evening by the Department of Epidemiology, GMC Jammu that he was COVID-19 positive. “It was around 10 p.m. on March 29, Sunday, when he was informed about the test result. On early Monday morning an ambulance reached his house and he was taken to the hospital,” says a close relative of the family, pleading anonymity.

On Monday morning, newspapers of Jammu and Kashmir, had doctor’s name flashed all across. “It seems someone was more interested to inform the press about the doctor and his name than to care about our family,” he says. The family members, including the doctor’s wife, his father, mother and family servant were shifted to the guest house.

The relatives say they were shaken as for the next three days, no one bothered to test any of the family member. “They were saying the family is asymptomatic.” At the same time, the head department microbiology, Government Medical College, Jammu, Dr. Shashi Sudan, issued a statement saying the concerned Assistant Professor was not part of the coronavirus testing team. However, the statement was rejected by the doctors of the college and they said he was part of the team and was working from March 13 to March 19. The doctors also released a duty chart showing the Assistant Professor was part of the team for the said period.

Dr. Sudan's statement added to the anxiety of members, who were in isolation at the guest house. At the same time, a video was posted on social networking site Facebook showing the Assistant Professor’s wife shouting and asking for help. In the video, his wife, a dental doctor, says her husband had informed her on phone that three of her family members including her, have tested positive.

“For the past three days, we were imploring for help but no one is coming forward. Are we not human beings,” the wife cries in the video. “My husband is ill. He is in the hospital. They didn’t give him proper personal protection kit when he was on duty testing people,” she says, adding that after her husband tested positive, they went into quarantine and for three days they were not tested.

The video has moved people across Jammu and Kashmir. Finally, when they were tested, the wife, servant and the father of the Assistant Professor, too, tested positive for the deadly virus. His mother, who is a heart patient and has only one kidney, tested negative. Family sources say instead of properly informing the family about the test results, the authorities parked the ambulance outside their guest house and announced from a loudspeaker fitted to the vehicle that they should board it. “Didn’t they think for a moment that this would have led to heart attack of aged parents of the doctor,” asks the family member. “In our family we have 12 doctors, but we will never forget what has been done to us,” he says.

However, Dr. Sudan gave a statement clarifying his earlier statement, saying the doctor was part of the testing team and he is very dedicated doctor. The doctors of GMC had alleged that the the protective gear provided to them is without PVC coating which is against the guidelines of the World Health Organisation.