The forthcoming Bengal elections will be a battle of many narratives put up by the two rivals, Mamata Banerjee and Narendra Modi. 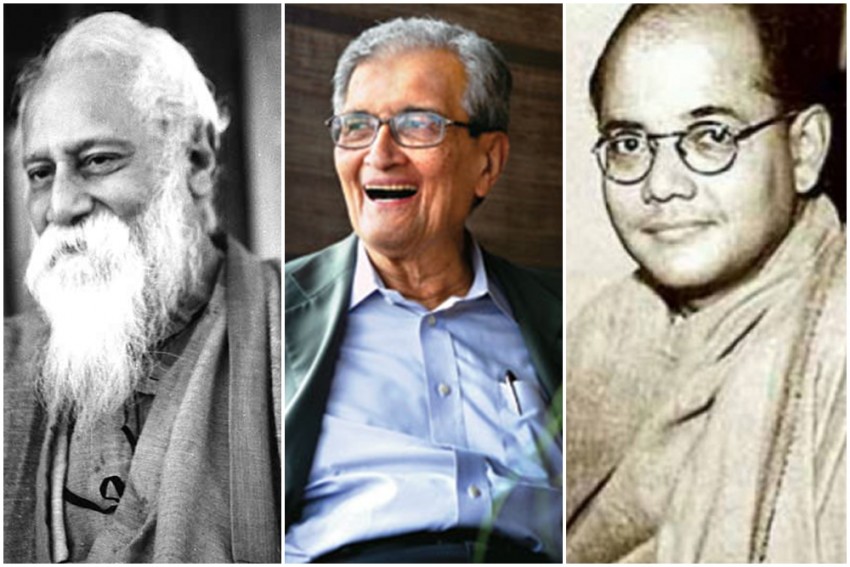 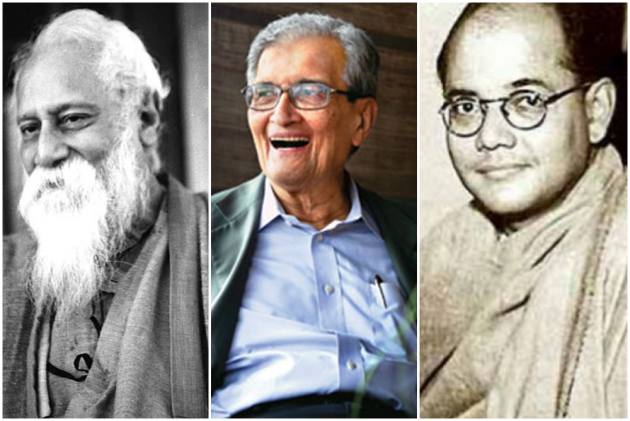 “This battle is to restore Bengal’s economic and cultural heritage and transform it into Shonar Bangla (Golden Bengal) once again,” said union home minister Amit Shah.

Chief Minister Mamata Banerjee said that she would not let Bengal turn into Gujarat or Uttar Pradesh, or be ruled by people hailing from outside states.

According to the Bharatiya Janata Party (BJP) Bengal unit president Dilip Ghosh, “This battle is to save West Bengal from turning into West Bangladesh.”

The Mamata Banerjee government’s policy of Muslim appeasement has created a threat for national security, the BJP has alleged.

The TMC has vowed to prevent Bengal from being ruined by “Narendra Modi’s divisive politics and disastrous economic policies that ruined India.”

It short, the battle for Bengal in 2021 is a battle of narratives. It’s also a battle between two faces – Narendra Modi and Mamata Banerjee.

On the Cultural Front

At the end of December 2020, with only about four months to go for the estimated high-voltage political showdown between Mamata Banerjee’s Trinamool Congress (TMC) and the Bharatiya Janata Party (BJP), the Bengal chief minister received an endorsement from none less than economist Amartya Sen, a Nobel laureate.

Sen, who was born and brought up in Santiniketan, one of Bengal’s major cultural hotspots, is at present a Thomas W. Lamont University Professor, and Professor of Economics and Philosophy, at Harvard University in the United States. The 87-year-old was recently accused by the authorities at Visva Bharati, the university founded by Asia’s first literature Nobel laureate Rabindranath Tagore in Santiniketan, of illegally occupying 13 decimal of the varsity’s land.

The authorities at V-B, a central government-funded university of which the prime minister is the chancellor, has over the past two years been accused of trying to “saffronise” Tagore’s hallowed institution.

Following this, the chief minister wrote a letter to Sen, expressing her solidarity with the Nobel laureate, and publicly alleged that Sen was being targeted because he had been opposing the BJP’s communal agenda and economic policies.

In response, Sen wrote back, saying, “I am not only most touched, but also very reassured... Your strong voice, along with your full understanding of what is going on, is, for me, a tremendous source of strength.”

Sen also expressed his personal affection and admiration for her in his letter, while the TMC hailed him as one of the icons of Bengal. Sen being one of Bengal’s most-acclaimed sons, the TMC jumped on to highlight Sen’s admiration for Mamata Banerjee.

The chief minister is also working with another Nobel laureate in economics, Abhijit Vinayak Banerjee. Banerjee has been part of the chief minister’s global advisory body for Covid-19 management and is also a member of the state government’s committee for the celebration on Netaji Subhas Chandra Bose’s birth anniversary.

The BJP cares a hoot about what Sen said. The BJP’s state unit president Dilip Ghosh who has made anti-intellectualism part of his political philosophy called Sen “a land-grabber” and asked why people should listen to Sen, “a person who has left the country for personal gains.”

“We would not listen on ethics to a person who has married three times to persons belonging to three different religions,” Ghosh said, referring to Sen.

This prompted the TMC to reiterate its old allegation that the BJP knew and cared for nothing about Bengal’s culture and heritage. The party has long been accusing the BJP of importing and trying to impose north-Indian culture on Bengal.

“The BJP is an anathema to everything that is Bengali. Only people having no knowledge and understanding of what Bengal stands for could insult Amartya Sen,” said the TMC’s Rajya Sabha MP Sukhendu Sekhar Roy.

Notwithstanding Dilip Ghosh’s anti-intellectualism, the BJP’s central leadership has been keen on triggering a cultural connect with Bengal. They, however, have their own choices – the greats of the nineteenth and early-twentieth-century Bengal. Some of them, including prominent cultural personalities and freedom fighters, had a leaning towards Hindu nationalism.

“Amit Shah has been saying since 2016 that to win Bengal we needed to create a cultural connect. We needed to highlight Bengali icons whose thinking match that of ours, even if to a certain extent,” said a senior leader of the party who did not want to be named.

However, most other icons of the state, including two of Bengal’s biggest icons, Rabindranath Tagore and Subhas Chandra Bose, stand in diametrically opposite poles of the BJP’s ideological thinking. Tagore was a stern critic of nationalism and Bose was a staunch upholder of communal harmony, Hindu-Muslim unity to be precise. Not surprisingly, Tagore and Bose are among the biggest icons the TMC highlight.

Nevertheless, over the past couple of years, Prime Minister Narendra Modi and union home minister Amit Shah have been repeatedly trying to express their admiration for Tagore and Bose.

After Mamata Banerjee, as the first head of any state in India, release classified files on Netaji in September 2015, the Modi government at Centre decided the next year to declassify Netaji files in its possession. Modi has since then paid many a tribute to Netaji at the national level, which in many observer’s opinions was his bid to undermine India’s first prime minister and Congress icon Jawaharlal Nehru.

Of late, Modi keeps quoting from Tagore whenever addressing the people of Bengal. Besides, the Centre, too, has formed a committee to celebrate Bose’s birth anniversary on January 23, 2021.

The BJP, however, has a different policy with regard to the majority of the state’s present-day public intellectuals – writers, poets, artists, theatre personalities, singer and actors – who have an expressed disliking for the BJP. Some of them are aligned to the TMC and other to various Left parties.

Sengupta, also the editor of the Rashtriya Swayamsevak Sangh (RSS)’s Bengali mouthpiece Swastika, was appointed to this post in December. Ganguly, a co-author of Amit Shah’s biography, is known to be close to the union home minister.

“We are not going to approach those belonging to the brand of intellectualism that Sen represents. These intellectuals have been consistently criticising the Modi regime, signing open letters, staging protests, over the past six years. We have nothing to do with them. There are intellectuals beyond those established ones, many of them living in small towns,” Ganguly said.

“Our outreach programme is not aimed at the intellectuals but the broader civil society members, which include school, college and university teachers, researchers, doctors, engineers and so on,” he added.

Despite these attempts by the BJP’s central leadership, the party has made several goof ups on the cultural front.

In 2019, a few days before the seventh phase polling of the Lok Sabha elections, a huge political controversy broke out over the vandalism of a bust of Ishwar Chandra Vidyasagar, a nineteenth-century polymath and one of the central figures of the Bengal Renaissance, at Vidyasagar in Kolkata. The bust was vandalised while a rally of Amit Shah was passing by the college.

While Mamata Banerjee spared no time in jumping on the issue, reaching in venue in just about an hour, blaming the BJP for showing utter disrespect to one of Bengal’s prime cultural icons, Modi and Shah refuted the charge and blamed the TMC. Nevertheless, video footage of the incident that emerged over the new few days showed participants in Shah’s rally breaking into the college campus and the room where the bust had been kept.

Incidental or not, the TMC swept the Lok Sabha seats that went for the elections in the seventh phase.

Only recently, Amit Shah garlanded a statue that the BJP claimed was of Birsa Munda, a tribal icon. The TMC immediately tore into the BJP, stating that the statue, set up by the state government, was of a tribal warrior and not Munda. They highlighted the issue to show how little the BJP knew of Bengal.

Responding to the TMC’s jibes, an adamant Dilip Ghosh said that even if the statue was not of Birsa Munda, it would be treated as one of him henceforth since the union home minister had garlanded it considering Munda’s statue.

In December, some Kolkata leaders of the saffron party went to invite Jahar Ganguly, an actor of yesteryears, for attending a blood donation camp organised by the party in the locality. Ganguly’s family was dumbstruck when the BJP men reached their home, as the actor had died in 1969.

A battle of divides – Ethnic versus religious

While the TMC highlighted Joy Bangla as a slogan reflecting Bengal’s cultural and linguistic pride, the BJP decided to add a twist to the tale, accusing Mamata Banerjee of importing the culture of Islamic Bangladesh.

The battle of divides – between religious and ethnic identities – was chiefly triggered by the BJP and its parent organisation, the Rashtriya Swayamsevak Sangh (RSS)’s attempts to popularise Ram Navami, a festival hitherto a minor one in the state, since 2017. With Ram Navami, they also brought to the fore the slogan Jai Shree Ram, which had had its popularity in India’s Hindi heartland but hardly heard of in West Bengal.

The TMC, while accusing the BJP of importing north Indian culture, adopted a new slogan: Joy Bangla, or victory to Bengal. This was the dominant slogan of Bangladesh Liberation War and is at present one of the chief slogans of Awami League, the ruling party of Bangladesh.

The more the BJP tried to portray the TMC as anti-Hindu, the more Mamata Banerjee’s party tried to accuse the BJP of being anti-Bengali.

As the BJP and other organisations associated to the Rashtriya Swayamsevak Sangh (RSS) pushed for popularising the slogan of Jai Shree Ram, it also stokes Bengali regionalist sentiments among some, who considered the slogan as an import from ‘the cow belt’.

This resulted in the birth of a number of Bengali rights organisations, including Bangla Pokkho, Jatiyo Bangla Sammelan and Bangla Sanskritik Mancha. They all are campaigning against the BJP alleging the party was trying to impose north Indian culture and destroy the very tenets of Bengal’s cultural heritage.

As the TMC vowed that they would not let West Bengal turn into Gujarat or Uttar Pradesh, and these Bengali rights organisations echoed, the BJP promised to “prevent West Bengal from turning into West Bangladesh.”

“Mamata Banerjee is not only importing slogans from Bangladesh but also allowing infiltration from there, which is changing the state’s demography, and has made the state into a safe haven for Islamic terrorists and fundamentalists,” said the BJP’s state unit general secretary Sayantan Bose.

And in this battle to make Bengal “free from Jihadi influence,” the BJP has by its side the RSS and its affiliated organisations, such as Vishwa Hindu Parishad, Bajrang Dal and Hindu Jagran Manch, among others.