"Will you touch the bus? Come, touch it. If you are a man, come and touch it!,” Aiyer can be heard saying in the video. 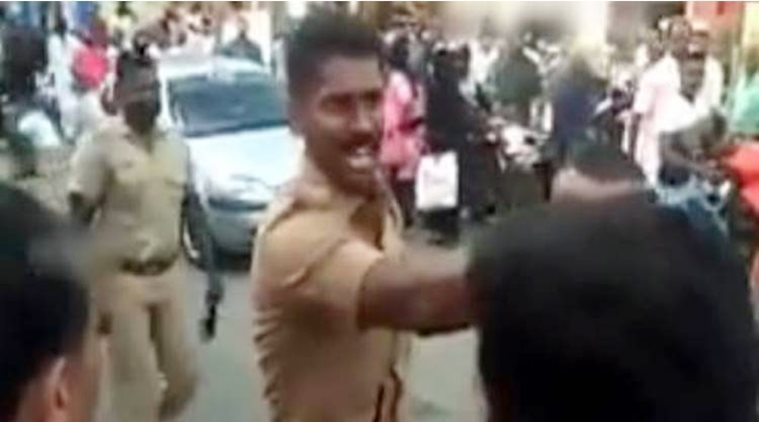 In the last few days, Kerala has witnessed massive protests against the entry of two women in their early 40s in the Sabarimala temple. Many buses were attacked and vandalised. From one of those several videos of the incidents which have surfaced on the social media,  a video of a Tamil Nadu police officer taking on a group of protesters has gone viral.

In the video, the policemen, identified as Mohana Aiyer, warning a mob of protesters who were allegedly wanted to torch a state-run bus in Kaliyakkavilai, a town located at the Tamil Nadu-Kerala border.

#SabarimalaStandOff "Dare to touch the buses if you can face the consequences,” this is how Tamil Nadu cop single-handedly challenged the mob of protesters and stopped them from vandalising public property. Stop the Violence. pic.twitter.com/N3mZnqQwOV

“Vandiye thottudiviya. ***ley todu paappom. Ambalaya irundaa thodu paappom. (Will you touch the bus? Come, touch it. If you are a man, come and touch it!),” Aiyer can be heard saying in the video.

The protesters were holding the protest to express their objection against the entry of two women, Bindu and Kanakadurga, into the Sabarimala temple.

The women had stepped into the temple of Lord Ayyappa, breaking a centuries-old tradition and defying threats from the Hindu right.

Kanakadurga, 44, and Bindu, 42, had entered the hallowed precincts guarded by police three months after the Supreme Court's historic judgement lifting the ban on entry of girls and women between 10 and 50 years of age into the hilltop shrine of Lord Ayyappa, its "eternally celibate" deity.

According to a report by The News Minute, on the day of the hartal, hundreds of KRTC buses were damaged and vandalised by protesters.

On Friday, violence involving BJP-RSS and ruling CPI(M) workers rocked politically volatile Kannur district in north Kerala with a number of houses and shops of rival leaders and workers being attacked over the Sabarimala issue.

Besides Kannur, Perambra in neighbouring Kozhikode, Malappuram and Adoor in Pathanamthitta, where the Ayyappa shrine is located, also witnessed a series of similar attacks and vandalism.

A total of 260 people have been arrested so far in connection with the Kannur violence in the last two days, an official statement said adding patrolling and raids had been intensified across the district.

Sotheby's MD Gaurav Bhatia Resigns A Month After Me Too Allegations