In an exlusive interview to Outlook, BJP Rajya Sabha member Swapan Dasgupta speaks about various aspects of the Citizenship Amendment Act (CAA) and the nationwide protests 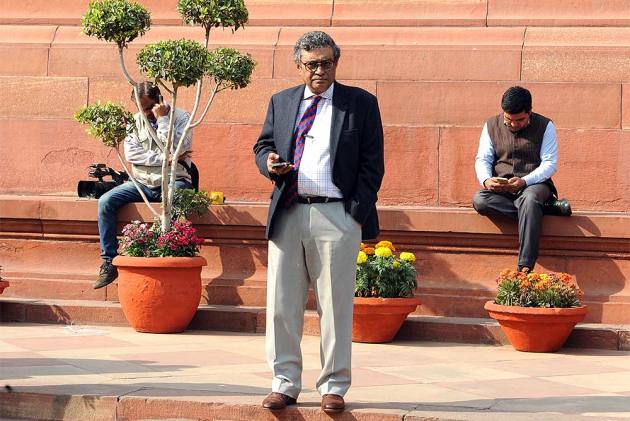 As the nationwide protests against the Citizenship Amendment Act (CAA) continue, BJP MP Swapan Dasgupta hit the headlines when he was gheraoed by students at Visva Bharati University and stopped from giving lecture on CAA. The Rajya Sabha member was invited by the university authorities to speak on CAA. Accusing Trinamool Congress (TMC) and Left parties of orchestrating the protest, Dasgupta said that the focus on student violence distracts attention from deliberations on CAA.

You were held hostage by Visva Bharati students for hours. Whom do you hold responsible for the incident?
I was invited to Visva-Bharati by Vice Chancellor Bidyut Chakrabarty, as part of the university’s lecture series to give a talk on the CAA. Since a group of protestors blockaded the main gate, the venue was shifted to another department of the university. I believe that left organisations were behind this. As the event was drawing to a close, a group of people stormed the venue at 5.15 pm. The security of the university shut the gate and prevented them from entering. I wouldn’t want any confrontation, so I didn’t try to leave the venue. But the mob was out to create confrontation. We got to know that there was another big contingent of locals wielding bamboos and iron rods outside the gate, who were affiliated to TMC. I wasn’t physically hurt in the scuffle and was let out from the venue after five hours.

The students lament that the university acted in a biased manner by allowing only BJP views on CAA…
The VC had made it clear that he wanted the participation of other speakers, who are of opposite views. Though he invited them, he was told that they wouldn’t share the platform with me.

January 5, A Blood Sunday At JNU: Did Police Right The Wrongs?

The student protests have intensified after the recent attack on JNU students.
There are two separate issues involved here. There is the issue of how the student demonstrations were treated. I am not concerned principally with student protests, but my concern is with the CAA. The issue of CAA has been tragically linked with the larger question of violence on the student protests. The CAA has to be viewed in its own terms. I feel that the focus on student violence distracts attention from the actual deliberations on CAA. I believe it’s a willful strategy because some people don’t want to address the central question of CAA. It’s important to be addressed.

How can we view student protests in isolation? It all started as protests against CAA in Jamia Millia and other campuses.
But the Jamia and Aligarh protests were principally Muslim protests and they got merged with student protests. Why should the CAA concern Indian Muslims? It doesn’t affect them.

We are seeing nationwide protests against the CAA. Why is the government not reaching out to the protestors or holding talks with them?
How can you say that there was no debate? The CAA was introduced in 2016. It didn’t get introduced in the Rajya Sabha because of the disruption by parties like Samajwadi Party (SP) and all. Now, the debate has turned into an organised opposition of the Muslim community and Hindu Bengalis against the citizenship. There’s no doubt that the government should hold discussion with the public to allay their concerns.

The concern is that CAA linked with NRC will lead to stripping of citizenship of many.
The NRC is a mythical concept at present. The NRC has neither been formulated nor presented in the parliament. It has to be debated in the parliament and a design has to be shown. The process has not started yet.

But the Home minister spoke about pan-India NRC in the parliament and in his election speeches also.
The Prime Minister has clarified that the NRC is only an idea at present. The rules haven’t been debated at the moment.

There are serious apprehensions about the National Population Register (NPR), which the government has recently approved.
NPR is a precursor to census operations. It only records the number of people in India and it does not talk about citizenship. The census operations have been going on since 1881.

In 2014, MoS Home Kiren Rijiju told Rajya Sabha that NPR was the precursor to NRC. Also the NPR has additional questions.
There was no notification regarding this. Same design has been followed in the last 50 years and nothing new has been added. There are people who suggest that there should be no border and anybody who comes to India should get citizenship.

Why CAA grants citizenship to refugees from only three countries and the reason for Muslims being left out?
These are Islamic countries and Muslims are the majority there. Two of the countries are directly affected by partition. Afghanistan has been put in for the sake of 40,000 Sikhs, who left the country when Taliban came in.

Concerns have also been raised about the exclusion of Sri Lankan Tamils from the ambit of CAA.
It’s a complete myth to say that Sri Lankans have not been given citizenship. They have been accorded citizenship at various points by special provisions.

What is the logic of setting 2014 as the cut-off year for CAA?
Let people say that 2014 shouldn’t be the cut off and we should have the ‘right of return’. If you do away with the cut off period, then you are incorporating the ‘right of return’, which guarantees everyone's right of voluntary return to their country of origin. The question should have asked before the parliamentary committee. Most of the TMC members didn’t even attend those meetings.