The UP CM directed officials that migrant workers be given insurance so that their life is secured and suggested that a scheme be launched to ensure their job security. 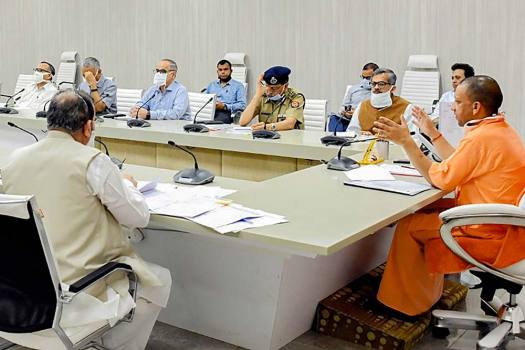 Chief Minister Yogi Adityanath on Monday said that other states would require to seek permission from the Uttar Pradesh government to employ labourers from the state.

In a two-pronged strategy to help migrant workers, the Uttar Pradesh government has decided to set up a Migration Commission for their employment in the state and made it clear that any other state that wants labourers from UP has to seek its permission.

The chief minister said, "They are our people... and if some states want them back, they have to seek permission from the state government".

With around 25 lakh workers and migrants having returned to the state till Sunday, Chief Minister Adityanath has directed that a Migration Commission be set up, according to Additional Chief Secretary (Home) Awanish Awasthi.

Adityanath also directed officials that migrant workers be given insurance so that their life is secured, Awasthi said. The chief minister suggested that a scheme be launched to ensure their job security, he said.

About the commission, Adityanath said it has been proposed to look into various factors associated with migrant workers' rights and to prevent exploitation while providing an official framework to ensure socio-economic and legal support for them.

"Insurance, social security, re-employment assistance, provision for unemployment allowance are some of the factors that will be looked into by the commission," he said.

Upset that migrant labourers were "not properly taken care of" by various states in the wake of the coronavirus-induced lockdown, Adityanath said, "These workers are our biggest resource and we will give them employment in Uttar Pradesh as the state government is going to set up a panel for their employment".

There is a need to ensure their socio-legal-monetary rights, the chief minister said.

According to an official spokesperson, the Adityanath government will make manpower available to other states only on guarantee of job security. The other states will not be able to use manpower from this state without the permission of UP government, the spokesperson said.

As per the instructions of Adityanath, skill mapping of about 14.75 migrant workers has so far been completed of which the maximum over 1,51,492 are real estate workers, the spokesperson said.

The skill mapping which is being done to provide them employment has also found that a large number of workers are furniture and fitting technicians, building decorators, home caretakers, drivers, IT and electronic technicians, home appliance and automobile technicians, paramedics and pharmaceutical workers, dress makers, beauticians, handicraft and carpet makers and security guards, the spokesperson said.

The state government will also give training once the skill mapping is completed during which training allowance will also be provided to them, the spokesperson said.

During an interaction with the RSS-affiliated publications 'Panchjanya' and 'Organiser' on Sunday, Adityanath said as per the feedback received from the migrant workers who returned to Uttar Pradesh from across the country, safeguarding their rights should get utmost attention and importance.

"All migrant workers are being registered and their skills mapped. Any state or entity interested in inviting migrant workers will need to assure and provide for their socio-legal-monetary rights," he said.