State Has Deviated From Path Of Development: Amit Shah At Bengal Rally 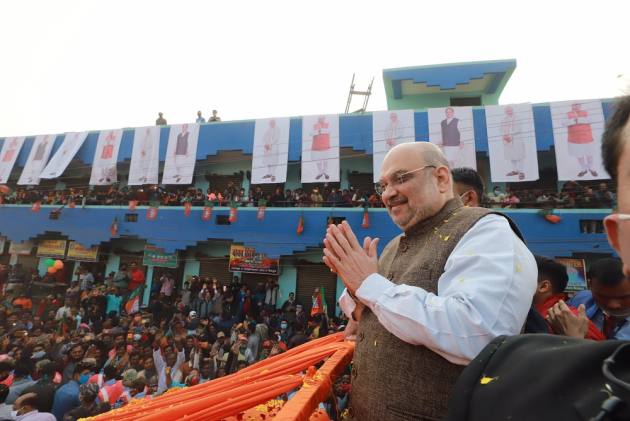 Union Home Minister Amit Shah on Sunday addressed a public rally in West Bengal's Bolpur region and lashed out at the TMC over the law and order situation in the state and alleged that the party was indulging in "appeasement politics".

"Anger prevails across Bengal, state has deviated from the path of development," Amit Shah said during his roadshow.

Over the recent attack on BJP chief J P Nadda's convoy, Shah asserted the Centre had the right to summon state IPS officers who were responsible for handling Nadda’s security.
Shah also claimed that Mamata has failed to oversee the law and order situation in the state, and added that the state was rapidly falling on all development indices.

Ahead Of His Roadshow In Bolpur, Amit Shah Visits Visva-Bharati

Shah said the CM and the ruling TMC were raking up the "outsider- insider" issue to divert public attention from the failures of the state government.

"The Centre is well within its rights to send a letter (summoning IPS officers for central deputation) to state government...if they have any doubt they can go through the rule book," Shah said.

On the "insider-outsider debate", Shah said a son of the soil will become the chief minister in West Bengal if BJP is voted to power.

"I think Mamata di has forgotten a few things. When Mamata di was in Congress did she call Indira Gandhi an outsider? Did she use that term for Prime Minister P V Narashima Rao? Is she trying to create a country where people of one state are not allowed in other states?" he asked.

He also attacked the Mamata Banerjee government over the issue of cross-border infiltration.

"The TMC can never stop infiltration as it believes in appeasement politics. Only BJP can stop it... Mamata Banerjee supports farmers protest but doesn't allow cultivators of Bengal to get the benefits of central schemes. Is this the way to honour the federal structure?" he said.
Responding to a question, the home minister said the rules for implementation of the Citizenship (Amendment) Act will be formulated after the Covid-19 pandemic is brought under control.

"Because of corona, such a massive process can't be carried out. As soon as Covid vaccination starts we will discuss it," he said.

Addressing people at a roadshow, Shah vowed to restore the state to its former glory when it was called "sonar Bangla" (Bengal of gold) if the BJP is voted to power.

"I have attended and organised several roadshows in my life but have never seen one like this. This roadshow is a reflection of people's anger against the Mamata Banerjee government. This crowd reflects people's faith in the agenda of development of Narendra Modi Ji," Shah told the massive gathering at the roadshow.

Mamata Banerjee supports farmers protest but doesn't allow cultivators of Bengal to get benefits of central schemes, he said. The Union Minister also shared that Agriculture Minister Narendra Singh Tomar is expected to meet protesting farmers on Monday or Tuesday to end their stir.