The doctors at a hospital in Udaipur are making Covid-19 positive children paint, sketch and sing to keep them engaged and away from boredom.

At a Covid-19 designated hospital in Udaipur city of Rajasthan, when the number of infected kids shot up and the doctors found it difficult to keep them engaged, they came up with some innovative ideas.

The administartion at American International Institute of Medical Sciences said that in last one week, Udaipur city has witnessed a surge in Coronavirus infection as the number shot up from 40 patients to 325 within a week. Accordingly, the number of infected youngsters has also gone up.

“Till last week, we had only two kids and it was easy to handle them. But their numbers have gone up to 37 with 35 new cases reported within five days,” Dr Anand Jha, Group Director, American International Institute of Medical Sciences, said.

Doctors said  that most of the children are asymptomatic and they don’t even feel or know that they are infected. 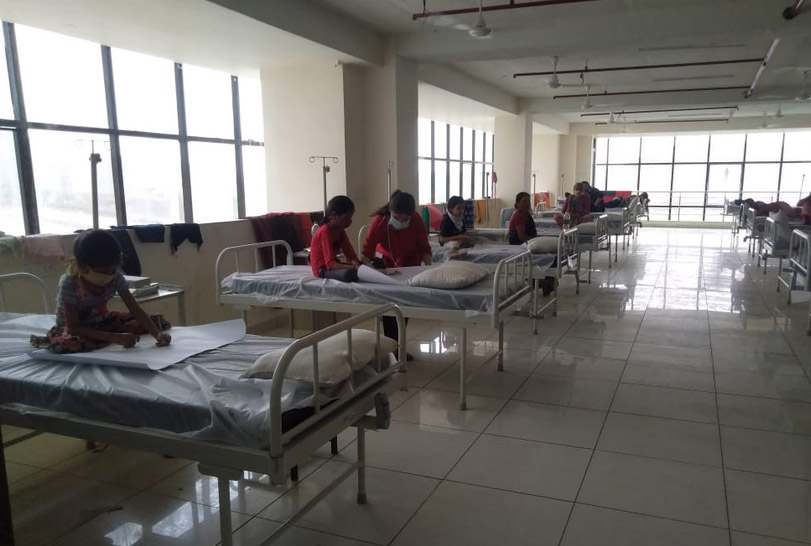 “We educated them about social distancing but we realised that was not enough. To ensure that they implement it, we needed to have something to keep them occupied,” Dr Asif Ansari, a doctor, said.

He added, “One of us provided a few kids with plain paper and sketch pen and it worked.”

Doctors ask them to sketch whatever children feel like and colour it. They also spend time with kids and indulge in drawing and colouring with them.

“One has to act a child's age to keep him or her engaged. We revisit our childhood days and sometimes we feel at home. It is extremely enjoying and relieving” Dr Ansari said.

Apart from sketching, the doctors also play Antakshari -- a game in which one has to start singing with the ending letter of another person’s song -- with children. This leads to a singing competition among kids which and helps them remain occupied.

“We also lecture kids on the positivity of life in a way of story-telling so that they don’t get bored,” Shiv Pratap from nursing staff said.

Healthcare professionals said they didn’t visualise a situation where so many youngsters would have to be kept in an isolation ward in a hospital.

"Kids need a different environment, tools to engage, food, support system and a lot more. We are trying to organise as much as we can for them," Jha said.