Is it possible that the absence of a Nehru-Gandhi at the helm of affairs in the Congress party will force Narendra Modi, for once, fight elections on livelihood issues? 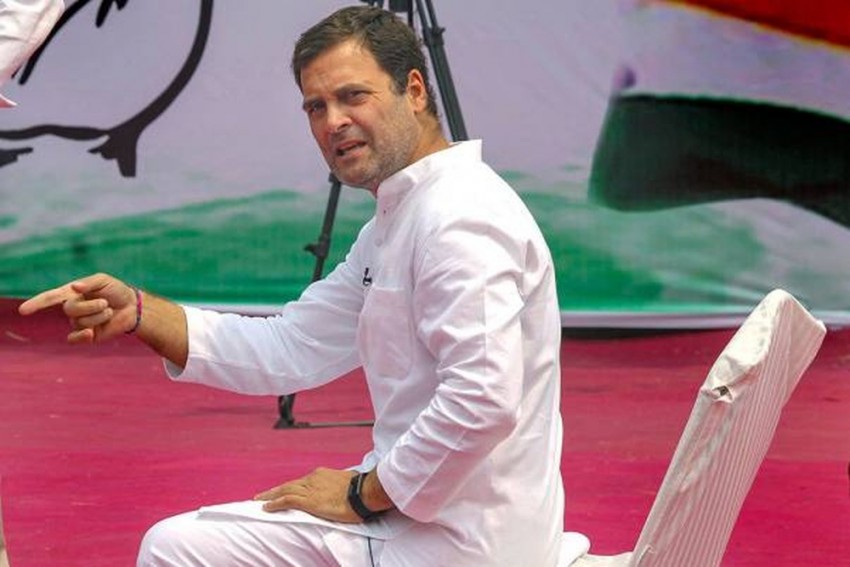 Rahul Gandhi faces another defeat as he failed to win the trust of the electorate in the fight against the BJP and Prime Minister Narendra Modi in Lok Sabha elections
PTI Photo-File
Puneet Nicholas Yadav May 23, 2019 00:00 IST Should Rahul Gandhi Resign As Congress President Now? 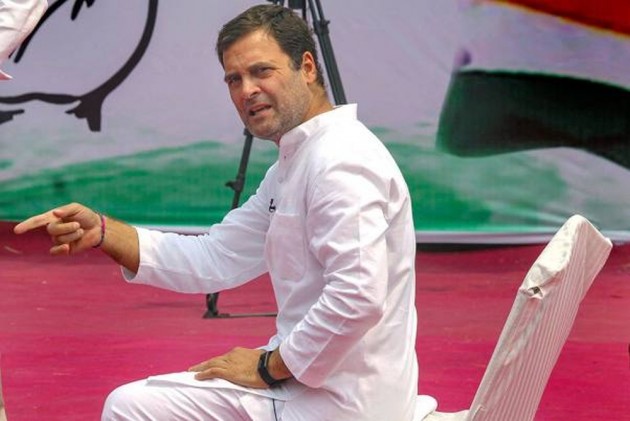 With trends for the Lok Sabha polls making it clear now that the Congress party is in for total decimation yet again, here’s a thought – should Rahul Gandhi, who has now unambiguously proven his inability to pose any credible electoral challenge to Narendra Modi’s BJP, resign as president of the Grand Old Party?

There is a deafening silence from Gandhi so far on the trends but he is expected to address the media later in the day. Will it be, true to Congress tradition in times of failure, yet another assertion of the “need for introspection” – chintan and manthan – as the party’s old guard would often say after an electoral debacle?

Since Thursday morning as one Congress bastion after the other began drifting towards the BJP, with Rahul himself trailing in the family pocketborough of Amethi behind old rival, Smriti Irani, it was evident that the charm of the Nehru-Gandhi dynasty and the sense of history that it once evoked have all but vanished; perhaps slayed by an acerbic Narendra Modi’s relentless campaign against the “naamdaars” or perhaps just a natural result of the law of diminishing returns.

Is it possible that the absence of a Nehru-Gandhi at the helm of affairs in the Congress party will force Modi and the BJP to abandon the vitriolic, yet popular with the voters, campaign against the dynasty and, for once, fight elections on livelihood issues? A flashback of the 2019 and 2014 Lok Sabha campaigns as also of several assembly poll contests shows that Mission Modi has been to demolish the Nehru-Gandhi legacy. Why then should Gandhi enable his nemesis? Why not bow out and let a non-dynast run the party?

It isn’t as if these questions have never been raised in the past. Similar questions were raised by P.V. Narasimha, the second non-Nehru-Gandhi to lead a Congress government as Prime Minister, in the early 1990s when a section of the party wanted Sonia Gandhi to take the political plunge. They were raised again when she actually did take the political plunge in 1997 and led the party to defeat in the general elections that happened the following year. But then, by 2004, Sonia proved her deftness at politics, reviving her party’s dwindling fortunes and stitching the UPA coalition that held power at the Centre for the next decade. Rahul Gandhi, however, has, in his 19-year-long political career repeatedly failed to display the political astuteness of his mother.

Leaders who have questioned Rahul’s capabilities in steering his party towards revival have often been shown the door by the Congress or simply fallen out of favour with the Nehru-Gandhis. But even those who have remained within the circle of confidence of the party’s First Family, on the condition of anonymity, often question their party president’s aptitude in politics. As the trends began to turn into concrete results against the Congress, there was already a hushed gossip within many party leaders about “yet another debacle under Rahul Gandhi” and some talked about his “misplaced self-assurance that his Chowkidar Chor Hai assault on Modi was turning the tide in favour of the Congress”.

A senior Congress leader told Outlook that “even if Rahul actually offers to resign, everyone within the party will huddle around him to convince him otherwise because, without a Nehru-Gandhi at the top, the party will simply collapse because every factional leaders will be at the other's throat in no time”. There alone, the Congress leader said, lies the party’s problem – “we aren’t getting anywhere with Rahul and we won’t be anywhere without him”.

Going by the sycophants club that the Congress is, it is highly plausible that even if Rahul does offer to step aside, there will be calls for his sister, Priyanka Gandhi to take over. Though Priyanka appears more politically savvy, her record in these elections – the first that the party contested after her actual political debut – has been pathetic to say the least. With the exception of Sonia’s constituency of Rae Bareli, nearly every seat where Priyanka campaigned has the BJP leading. Further, her role as the party’s in-charge general secretary of eastern UP hardly paid any dividends.

Ironically, just as this general election saw many in the common public asking – if not Modi then who, the question within the Congress on the leadership remains, if not a Nehru-Gandhi, then who? Who indeed?