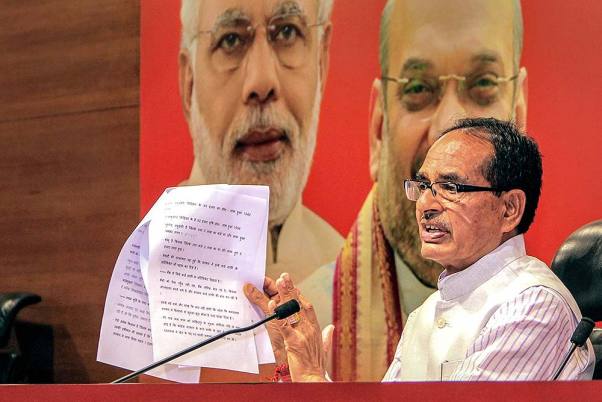 Chouhan's comments came amidst rising controversy over web series "Tandav". The series has been criticised for allegedly hurting religious sentiments.

"Obscene content is being served on OTT platforms. Young children are also getting affected due to the Internet and mobile phones. After seeing such content on mobile phones, a 12-year-old boy recently misbehaved with a six-year-old girl," Chouhan said.

He was speaking at the launch of PANKH abhiyan as part of the "Beti Bachao, Beti Padhao" drive.

"Young minds are getting affected by such content. Shouldn't such content be censored? Children are like a soft clay and they absorb what they watch. The Government of India is considering it (censorship on OTT) seriously," the senior BJP leader said.

An over-the-top is a streaming media service offered directly to viewers via the Internet. OTT bypasses cable, broadcast, and satellite television platforms.

Chouhan also said the people who commit crimes against women will not be spared.

Chouhan said he had introduced the "Ladli Laxmi Yojana" for girls so that they should not be considered a burden by their families.

He reiterated the demand for a debate on increasing the legal age of marriage for women from the current 18 years to 21 years, on par with men.

The chief minister also underlined the need to usher in reforms in "our judicial system, which does not spare the people who commit crime against daughters in the name of human rights".

Speaking on PANKH drive, the CM said, "P stands for protection, A for awareness, N for nutrition, K for knowledge and H for health. Under this drive, various schemes for the welfare of girls and women will be implemented at a fast pace," the CM said.

Chouhan also said that society should come forward to create awareness about women and girls.