Clashes broke out between Khasi Students Union members and local non-tribals of the area, as per the police. 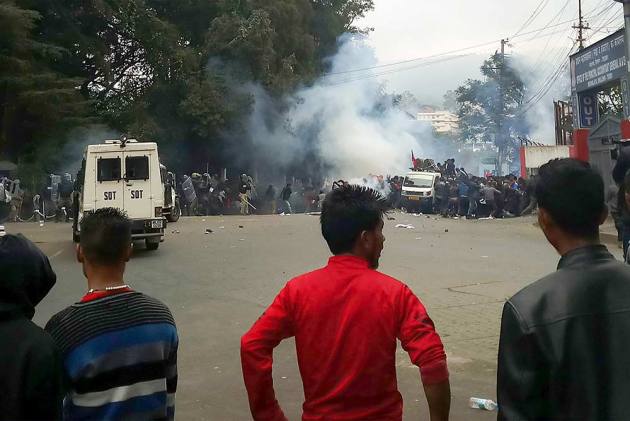 Curfew was imposed in parts of Shillong on Saturday as violence erupted a day after clashes between members of an influential tribal students body and non-tribals in Ichamati area of East Khasi Hills led to one death.

A group of unknown assailants stabbed at least 10 people on Saturday in the Bara Bazar area of Shillong, police said.  Following this, the district magistrate imposed an indefinite curfew on areas under Lumdiengjri and Sadar police stations in "apprehension of serious deterioration of law and order".

A statement by Meghalaya Police said ten people, all non-tribals were stabbed in Lewduh or Bada Bazar, a busy market place. One Rupchand Diwan succumbed to his injuries at the civil hospital.

Police said they were not sure of the identity of the perpetrators of the knife attack. SP City Bikram D Marak said the attackers had covered their faces.

Two non-tribals were assaulted in two separate incidents, according to the police.

Curfew was temporarily lifted in the morning even as two vehicles were torched in the city. Mobile internet services also remained suspended in six districts.

Claudia D Lyngwa, SP, East Khasi Hills said the situation is under control but tense. Police said they were investigating the knife attack. Earlier in the day, they arrested eight people, all nontribal, for their role in Friday’s incident.

According to the police, along with road blockade and burning of tyres, cases of cars being torched and a petrol bomb being lobbed were also reported late Friday night.

The government has also made available a vehicle to ferry tourists stranded in East Khasi Hills district and released the helpline number: 1800-345-3846.

In a statement, the District Magistrate, East Khasi Hills District, informed that curfew had been imposed in Shillong agglomeration and its adjoining areas with effect from 9:00 P.M. of 29 February to 8:00 A.M. of 1 March.

Reacting to the situation, Meghalaya Chief Minister Conrad K. Sangma appealed to the people to refrain from any kind of violence and ensure that peace is maintained.

A magisterial probe has been ordered into the incident in which one Lurshai Hynniewta succumbed to the major injuries he suffered at Ichamati under Sohra Division.

He further informed the government has taken all measures to maintain law and order with the deployment of additional forces including the increase of manpower in Sohra Subdivision to monitor and contain the situation.

Police said they have arrested eight accused who were allegedly involved in the violence in East Khasi Hills district, where one person died in the clashes. The violence followed a meeting against the Citizenship Amendment Act and implementation of the Inner Line Permit (ILP) regime.

“Early morning we arrested eight persons from Ichamati who were directly involved in the violence which killed one person and injured several others. They are named in the FIR,” Lyngwa said.

According to a statement by Meghalaya Police, the violence started after a meeting organised by the Khasi Students Union (KSU) in Ichamati.

“At around 3 pm, after the meeting, clashes broke out between KSU members and local non-tribals of the area. Thereafter, the KSU members burnt a haystack at the edge of the market and attempted to burn a house. The non-tribals retaliated, and stoned a bus carrying KSU members,” the statement said.

“Four members of KSU were injured, two were sent to Ichamati CHC and discharged, two were referred to Sohra CHC. One local taxi which had gone to collect the KSU members from the Ichamati market after the clashes was damaged.”

Lurshai Hynniewta, a taxi driver from Sohra, who was injured in the clashes, succumbed to injuries at a hospital.

Citing “apprehension of serious deterioration of law and order” a 10-hour night curfew was imposed in Shillong and adjoining areas by the Deputy Commissioner of the East Khasi Hills district.

“We have taken a decision to impose curfew. We will see how the situation goes and, if necessary, we will further extend it,” Chief Minister Conrad Sangma had told media on Friday after chairing an emergency meeting in Shillong.

A senior police official said they are keeping a close watch on the situation. “In tribal societies the funeral does not happen on the same day. Today the postmortem is being conducted. On Sunday, the funeral will be held. Situation could flare up again,” said this official adding that the police is trying to impress upon the local influential tribal organisations that the perpetrators have been arrested already and will be dealt with strongly.

Ichamati, which is close to the border with Bangladesh, has a majority non-tribal population.

Most of Meghalaya is covered under Sixth Schedule of the Constitution and hence, out of the purview of the CAA. Yet, amid local pressure, the Assembly had passed a resolution to demand an inner line permit regime to regulate the entry of the non-locals.