The Sabarimala temple would be opened on Tuesday for five days till February 17 for the monthly pujas during the Malayalam month of Kumbam. 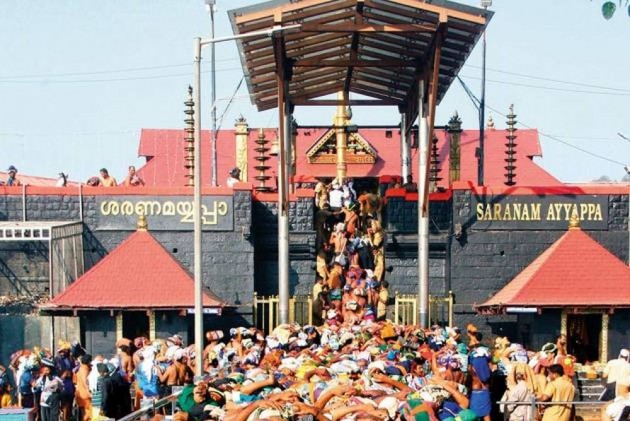 The Lord Ayyappa shrine is all set to reopen on Tuesday for monthly worship and there appears to be a sense of anxiety in and around Sabarimala after witnessing frenzied protests during the recently concluded annual pilgrim season over the entry of young women.

The hilltop temple would be opened for five days till February 17 for the monthly pujas during the Malayalam month of Kumbam, temple authorities said on Monday.

Several special rituals including 'kalabhabhishekam', 'sahasrakalasam' and 'laksharchana' would be performed during the five days at the shrine, the 'sanctum sanctorum' of which would be thrown open by chief priest Vasudevan Nampoothiri on Tuesday evening.

Tantri (head priest) Kandararu Rajeevaru would also be present during the time of pujas, they said.

As the shrine is set to open, the state police have stepped up vigil in and around Sabarimala in view of possible protests by Sangh outfits against the entry of women, belonging to the traditionally barred age group.

The police said certain restrictions had already been imposed in areas from Nilackal, the base camp to Sannidhanam (temple complex) to ensure smooth darshan for devotees.

"Considering the untoward incidents caused by various organisations in areas around Sabarimala when the shrine was opened for the Thulamasa puja and the protests over the Supreme Court order allowing entry of women of all ages into the shrine, certain restrictions have been imposed in areas to ensure smooth darshan for devotees," an official release said.

Devotees and reporters would be allowed to travel from Nilackal to Pamba and Sannidhanam only after 10 am on February 12, it said.

The BJP and Sangh Parivar outfits, which had spearheaded the agitations against the implementation of the September 28 Supreme Court verdict permitting women of all age groups into the shrine, are yet to reveal whether they would try to block young women.

The areas in and around the hilltop shrine had witnessed widespread violence after the CPI(M)-led LDF government decided to implement the apex court order allowing women of menstrual age into the temple.

Marking the culmination of the over two-month-long stormy annual pilgrimage season, the Lord Ayyappa temple was closed on January 20.

Traditionally, women of menstruating age or in the age group of 10 to 50 years were not allowed to enter the temple as the deity, Lord Ayyappa, is believed to be in the form of "Naishtika Brahmachari" (perennial celibate).