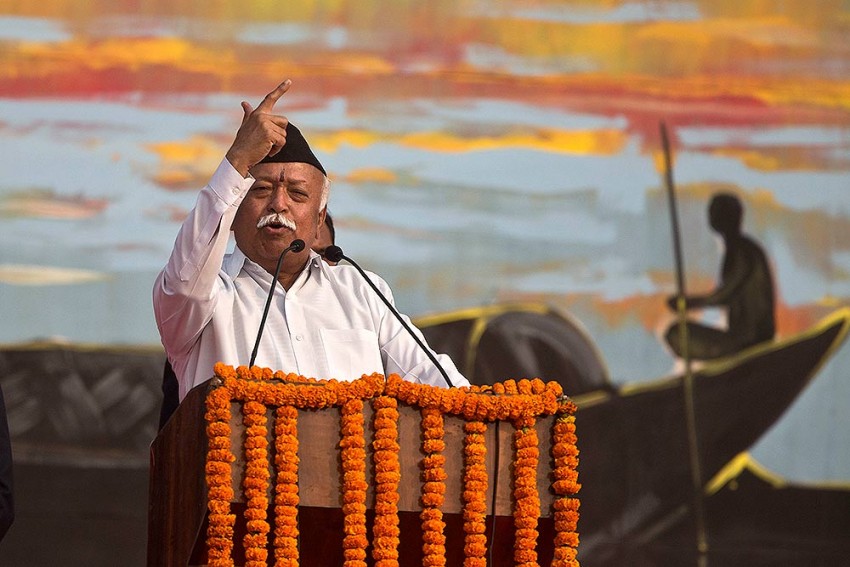 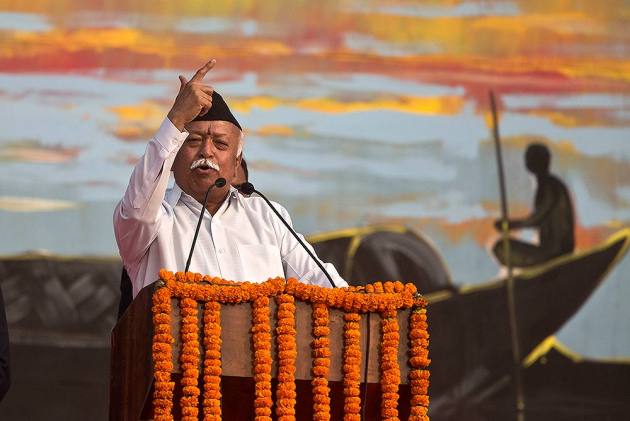 Shiv Sena on Tuesday lauded RSS chief Mohan Bhagwat's remarks on Hindutva as being broad and inclusive, adding he has given a befitting reply to those who feel that anyone not with the BJP is not Hindu.

"He is for investing in vaccine development. The BJP leaders who are happily clanging bells for reopening of temples amid the pandemic should listen to Bhagwat first," an editorial in the Sena mouthpiece Saamana said.

"Some 'Thekedar' (contractors) have a perverted ideology that Hindutva is their monopoly and those not with the BJP are not Hindus. The RSS chief has shown them their place," the editorial said.

Responding to Shiv Sena's fresh salvo, Maharashtra BJP's chief spokesperson Keshav Upadhye said, "It is the Shiv Sena that has given up Hindutva and to hide its failures, that party needs to criticize the BJP over any issue."

At the RSS' annual Dussehra event in Nagpur on Sunday, Bhagwat had said the Sanghs concept of Hindu Rashtra is not political or power centred.

He had said the Hindu culture expressed itself in diverse forms, but some groups are trying to spread hatred in society by creating insecurity among people.

Bhagwat had claimed the word Hindutva was applicable to the 1.3 billion people of India as it expressed identity, continuity of spirituality-based traditions and the entire wealth of value system in the land of Bharat.

The Sena mouthpiece claimed the BJP's Hindutva revolves around the cow. "Hindutva supporters in BJP have instigated Hindu-Muslim riots and reaped political benefit out of it," it said. There is cow slaughter daily in many BJP- ruled states, so BJP's cow politics on Hindutva is baseless, it added.

"It is shocking that rape and murder are also seen through the Hindutva prism. The definition of Hindutva has never been so narrow as it is now," the Sena said.

The editorial also referred to Maharashtra Governor Bhagat Singh Koshyari's sarcasm-laden letter to Thackeray saying it was ironic that shrines were still shut while bars and restaurants were allowed to reopen in the state.

Koshyari had asked if Thackeray, "a strong votary of Hindutva, had suddenly turned secular". Thackeray had hit back, saying he did not need a certificate of Hindutva from Koshyari.

"Koshyari tried to teach lessons to Thackeray by asking whether he had given up his Hindutva. Koshyari wanted the state government to reopen places of religious worship.

"Thackeray responded strongly, saying his definition of Hindutva does not include clanging of bells and dishes," the editorial said.

Upadhye claimed the 11-month-old Maha Vikas Aghadi government in the state, comprising the Shiv Sena, NCP and Congress have failed on almost all the fronts.

"This government is still struggling to control the Covid-19 cases, the state administration is weakened and there is no direction to this government at all," Upadhye said.

"That is why the Sena needs to keep criticizing the BJP to divert attention," the BJP spokesperson said.