Reportage On Rhea Shows Women Are At Forefront In Perpetuating Patriarchy: Nidhi Razdan

The frenzied media trial in Sushant Singh Rajput's case has brought the focus on gender attitudes within media. Outlook speaks to renowned TV anchor Nidhi Razdan on the issue. 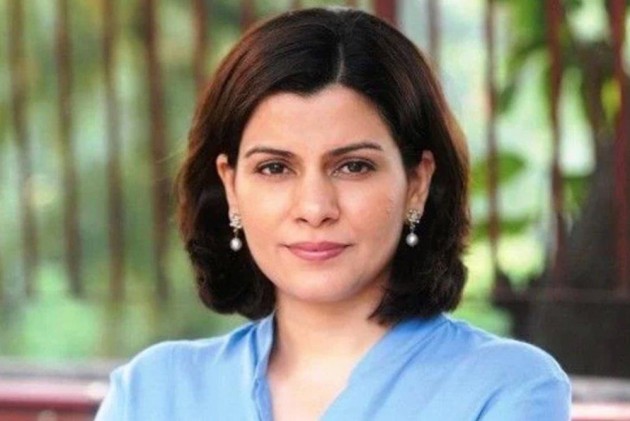 The arrest of TV actress Rhea Chakraborty by the Narcotics Control Bureau has sparked a heated debate on the dangers involved in a trial by media, especially on how some TV news channels can resort to misogynistic narratives. Nidhi Razdan,  former executive editor, NDTV, speaks to Outlook about how TV journalism has touched ‘new lows’.

Q) Rhea Chakraborty’s T-shirt message on ‘smashing patriarchy’ has sparked a debate. The most striking part here is how some women editors in TV news channels have played a major role in vilifying and pronouncing Rhea guilty in their studios -- what are being called 'kangaroo courts'. Why do even women in top editorial roles fall back on deep-rooted patriarchal tropes and dish out blatant misogyny?

In my opinion, women are at the forefront in perpetuating patriarchal notions about other women. That has been amplified in the way the Rhea case has been covered as well. Women are women’s worst enemies. It’s very much on play in this case. They blamed Rhea for everything that went wrong in Sushant Singh’s life. They genuinely believe that a woman controls a man’s mind and she is responsible for his behaviour. It’s a typical mindset of the Indian family. Going by the Narcotics Control Bureau'scharges against Rhea, if Sushant Singh was alive today, he would have also gone to jail for taking drugs.

Q) The levels of bile on television are so high that, on social media, many are comparing journalists to 'vultures'. One of the women editors said in her program that she takes no offence in being called a vulture.

This is the alternate universe we live in. What can one even say about it?

Q) Would you have reported it differently?

It’s a news story and unfortunately it has acquired political connotations now. I wouldn’t have given it 24/7 oxygen. In fact, newspapers are much better in terms of reporting the case. They hardly put it on the front page. China and the Indian economy are getting far more prominence in newspapers. This is the problem with TV channels. They have made it into a media trial. Definitely, I wouldn’t have done it this way.

Q) We have seen similar media trials during the Aarushi Talwar case too. After 12 years, has the media undergone any course corrections?

This case reminded me of the Aarushi Talwar case. Even at that time, Aarushi’s mother was scrutinized by many. The discussions veered around whether she’s crying enough or how she’s speaking. I still don’t know who killed Aarushi, but the speculative stories put out by the print media and TV channels are nothing to be proud of either.

Q) There is criticism that TV reporting has touched its nadir. But we have seen similar media mob frenzy during the Indrani Mukerjea-Sheena Bora case and other high-profile cases.

Even in those cases, the reporting didn’t hit this low. That may be called tabloid reporting. Still, it wasn’t this kind of saturation coverage you are watching now. Another point is that the SSR case has become political because of the upcoming Bihar elections. Kangana Ranaut’s entry into the issue and the Maharashtra government demolishing her office is part of the political game. The SSR case is different from previous instances.  I would say that earlier cases of media trials were giving us a warning sign that the media is going down a slippery slope. It now seems it’s hard to come back from this point.

Q) What do you think is the danger involved in a trial by media, besides the crass sensationalism and voyeurism that accompanied even old tabloid journalism?

The danger is that it has turned into a lynch mob, it allows the lynchmob mentality and gives it sanctity. We pronounce people guilty before the due process has taken place. It’s based on nothing but innuendo, theories, and selective leaks. This is not the way reporting is done. That’s the danger you are seeing now. I don’t know what is Rhea Chakraborty guilty of. At the moment, a section of media has already pronounced that she’s guilty. If that is really the case, there needs to be a proper trial and she has to go through due process. We have made a caricature of ourselves. It is embarrassing.

Q) Do you think Rhea was arrested to satisfy the 'collective conscience'?

I haven’t closely followed the gory details of the story as I am more concerned about the China-India standoff and the Covid situation. On the face of it, three weeks ago, Rhea was accused of murdering Sushant Singh and money-laundering. None of it has been proven till now. Rhea is arrested now for procuring marijuana. Prima facie, it doesn’t appear to be a very strong case.

Q) This case exemplifies a violation of journalistic norms of objectivity, fairness, and factual accuracy. What is the need of the hour?

There should be regulation from within the industry. It needs to strengthen bodies such as the Press Council. If the government begins to censor and police the media, then we are in trouble. That’s not acceptable. Let the Press Council impose heavy penalties on those who violate journalistic ethics and norms. The change will happen only when advertisers become conscious and stop funding news channels which peddle hate. Until advertisers take a stand that they fund only genuine news and not sensationalism, nothing is going to change.

Q) Where does the buck stop?

Ultimately it stops with the viewers. The TV ratings of the SSR story have been very high. So we all are complicit in this. The viewers also need to take a stand.