The tricolour measures 30x20 feet and is 131-feet-high, making it one of the tallest in the Jammu region. It is even visible from Pakistan. 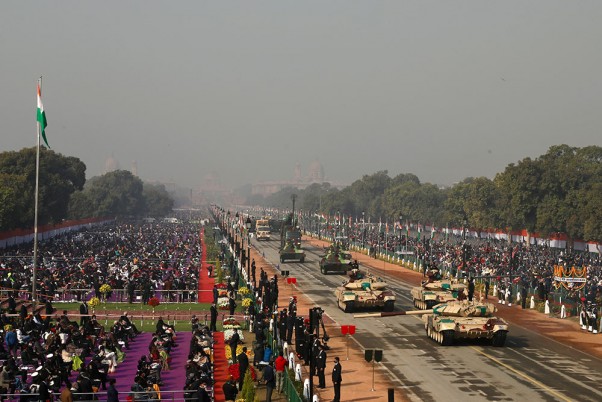 The Border Security Force on Tuesday unfurled a 131-feet-high Indian flag along the Indo-Pak border in Jammu district on the occasion of Republic Day, officials said.

The flag measured 30x20 feet and is amongst the tallest in the Jammu region. The BSF officials informed that the tricolour can be seen even from a distance in Pakistan.

A cultural program was organized at the post on the occasion. Cultural performances by BSF troops, regional outreach bureau, J-K tourism, Harman dance institute, besides performances by cultural artists and school children were held at the venue, the officials said.

On the occasion of the 72nd Republic Day, Inspector General of BSF Jammu frontier N S Jamwal hoisted one of the largest national flags along the International Border (IB) at Octroi border out post (BoP) in the R S Pura belt with great fervour and enthusiasm, they added.

The IG BSF before hoisting the tricolour at Octroi unfurled the national flag at the BSF headquarters in Jammu.

The hoisting of the flag at Octroi was possible because of the sponsorship of the Lupin Foundation, the J-K tourism and the administration, the officials said.

Inauguration of the national flag at BoP Octroi would serve as an important landmark for the people visiting the Jammu border, they said.