'I will take part in the dialogue with the sisters-brothers and party workers of Assam on many important issue,' Congress leader Priyanka shared on Facebook 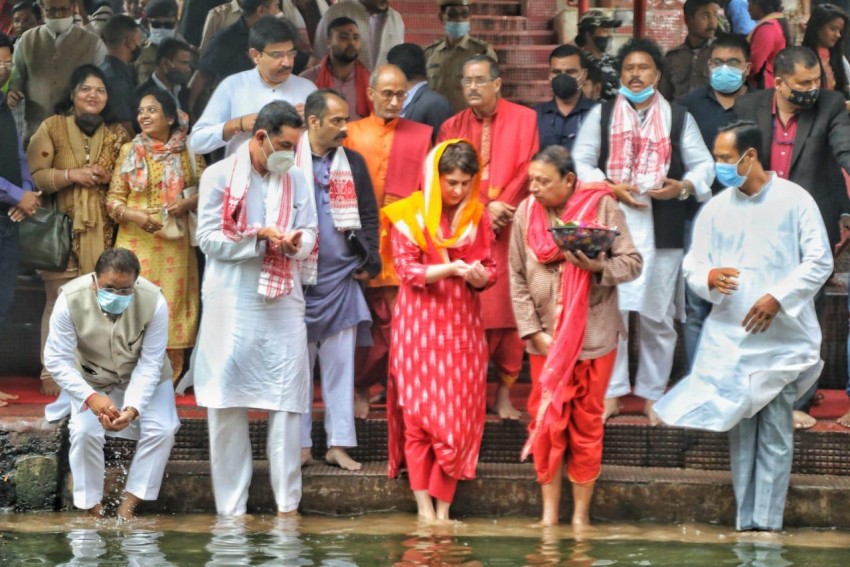 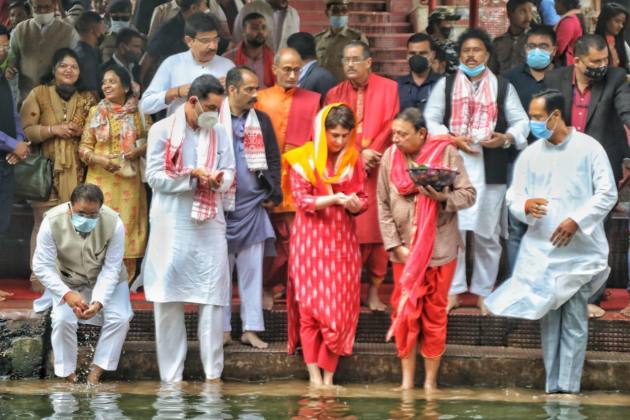 Congress leader Priyanka Gandhi Vadra on Monday morning reached Assam and kicked off her two-day visit to poll-bound Assam by offering prayers at the famous Kamakhya Temple in Guwahati.

The 49-year old AICC general secretary was accompanied by the party's Assam in-charge Jitendra Singh. She was received at the Lokpriyo Gopinath Bordoloi Airport in Guwahati by state unit chief Ripun Bora and other party leaders.

Clad in a red outfit, the prevalent colour symbolising Shakti, the Congress leader said that she wanted to visit the temple for long and "her wish has come true".

"I sought blessings for myself, my family and above all for the people of Assam," she told reporters.

She halted at Jalukbari area, where Congress supporters felicitated her, before proceeding to the Shakti Peeth atop Nilachal Hills.

Asked about the forthcoming elections in the state, she said she will talk later about politics.

"I come to temples to seek blessings and offer thanks to the God who has given me a lot," she added.

Earlier, the Congress leader posted on her Facebook page, "Today I will start my two-day Assam tour by visiting Maa Kamakhya Devi. I will take part in the dialogue with the sisters-brothers and party workers of Assam on many important issues."

Bora said that entire Assam is "looking forward to her two-day visit and the enthusiasm is evident".

"Her visit, which further fuels hope in the heart of every last person in Assam, deceived by lies and fake promises in these five years, of a new dawn of progress awaiting the state under Congress rule," Bora tweeted.

After visiting the Kamakhya shrine, she left for the airport to go to Lakhimpur in Upper Assam, where she is scheduled to visit Sonari gram panchayat, hold a meeting with party workers and launch a protest programme of unemployed youths.

She is also scheduled to visit the birthplace of Srimanta Sankardeva's primary disciple Sri Madhavdev at Letekupukhuri before leaving for Gohpur in Bishwanath district.

The Congress leader is scheduled to offer homage at the statue of freedom fighter Kanaklata Barua, who was martyred in police firing while attempting to hoist the Indian flag during the Quit India movement in 1942.

She will also interact with women tea garden workers and self-help group members before spending the night at Bishwanath.

On Tuesday, the Congress leader will visit Sadharu tea estate in Biswanath, where she will interact with women tea garden workers, before leaving for Tezpur in Sonitpur district.

She is also scheduled to visit the Mahabhirav Temple and address a public rally at Tezpur, before concluding her two-day visit to the state.

Elections to the constituencies in these three districts will be held in the first phase of polling in 47 seats on March 27.

Elections to the 126-member assembly will be held in three phases, with 39 seats going to polls in the second phase on April 1 and 40 in the third and final phase on April 6.