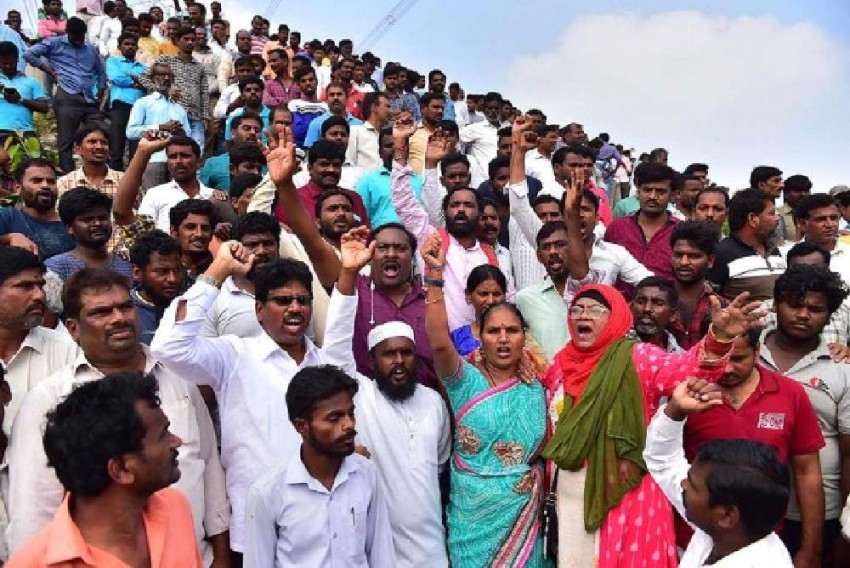 People raise slogans in favour of Telangana police at the encounter site, where four accused in the rape-and-murder case of a woman veterinarian were shot dead.
PTI Photo
Outlook Web Bureau 2019-12-06T20:19:52+05:30 Police Kill All Accused In Telangana Rape-Murder Case; Some Shower Flowers, Others Raise Questions 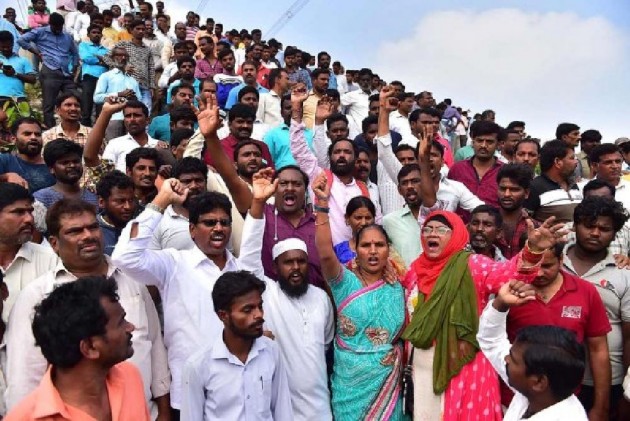 On Friday, the country woke up to the news of the killing of all the four accused in Telangana veterinarian's gang-rape and murder. The Telangana Police, later in the day, claimed the accused were gunned down in an encounter when they were taken to the crime scene to retrieve some "material objects".

Cyberabad Police Commissioner, CV Sajjanar, in a media briefing, said the accused were unlocked when they were taken to the crime scene but "they confused the police, attacked them with sticks, snatched weapons and started firing."

In self-defence, Sajjanar told reporters, the police had to fire that led to the killing the four accused. Two policemen were also injured.

The events of Friday morning, however, were uncannily similar to an alleged encounter that happened in Warangal, in 2008. Sajjanar was the Superintendent of Police in Warangal, at the time of that encounter, and he had gunned down three men accused of throwing acid on two girls.

As soon as the news of the killing of the accused spread, people in Telangana erupted in joy and celebrations. People showered flowers on the policemen and even some women tied Rakhis to the cops.

A section of people reached the "encounter" site and congratulated the police and raised slogans in favour of them like 'Telangana police zindabad' and "We got justice" and said it would act as a deterrent for people from committing such crimes.

The father of the woman veterinarian said he was very happy that all the four accused were killed. "We watched on TV that they were killed in an encounter. We are very happy. Even people are happy. I thank the Telangana government and police for the encounter. I thank everyone who stood by us," the woman's father said.

Even the father of the 2012 Delhi gang-rape victim 'Nirbhaya' backed the Telangana police for killing all the four accused. "I feel they have done a very nice job. If they had escaped, there would have been questions about how the police let them escape," he said.

The opinion of the people and politicians, however, remained divided over the killings, with some lawmakers terming the incident as a collapse of the criminal justice system.

Delhi Chief Minister Arvind Kejriwal said while the people of the country are rejoicing the deaths of the four accused, it is also worrisome that they have lost faith in the justice system.

BJP leader and former Union minister Maneka Gandhi said one could not take law in their hands for it is dangerous for the country.

While most BJP leaders hailed the police, Gandhi said, "Jo hua hai bohot bhayanak hua hai desh ke liye (Whatever has happened is dangerous for the nation). You can't take law in your hands. They (accused) would've been hanged by Court anyhow. If you're going to shoot them before due process of law has been followed, then what's the point of having courts, law and the police?"

Gandhi and Kejriwal were among a handful of politicians who raised questions over the killing of the rape accused.

Parliamentarian and former actress, Jaya Bachchan, saw it as speedy justice for the rape victim. A few days ago, Bachchan had said in the Parliament that rapists should be "brought out and lynched".

The killing of the four rape and murder accused in an alleged police encounter has certainly raised many eyebrows and thrown up several questions.

Former Supreme Court Judge, Markandey Katju, was one of those who raised questions and said the encounter appeared to be "fake."

Katju tweeted saying, "In Prakash Kadam vs Ramprashad Vishwanath Gupta ( see online ) a SC bench presided over by me held that in cases of fake ‘encounter’ the policemen concerned must be given a death sentence. The Hyderabad ‘encounter’ appears to be clearly fake."

Former top cop of Delhi Police, Maxwell Pereira told Outlook he was shocked by the incident and that the killings “throw up a lot of questions”.

The National Human Rights Commission also took cognisance of the matter and ordered an inquiry into the police encounter.

The apex human rights body said the encounter early morning on Friday is a matter of concern.

"The incident which has taken place now clearly indicates that the police personnel were not properly alert and prepared for any untoward activity by the accused on the spot, which resulted into death of all four," it said in a statement.

During the press briefing, Cyberabad Police Commissioner Sajjanar was asked about the criticism the killings have evoked and the probe the NHRC has ordered. In response, Sajjanar said: "Law has done its duty."