Modi reached Vastral Gam metro station and inaugurated the first phase by unveiling a plaque and waving a green flag to the metro train and travelled in it for a short distance. 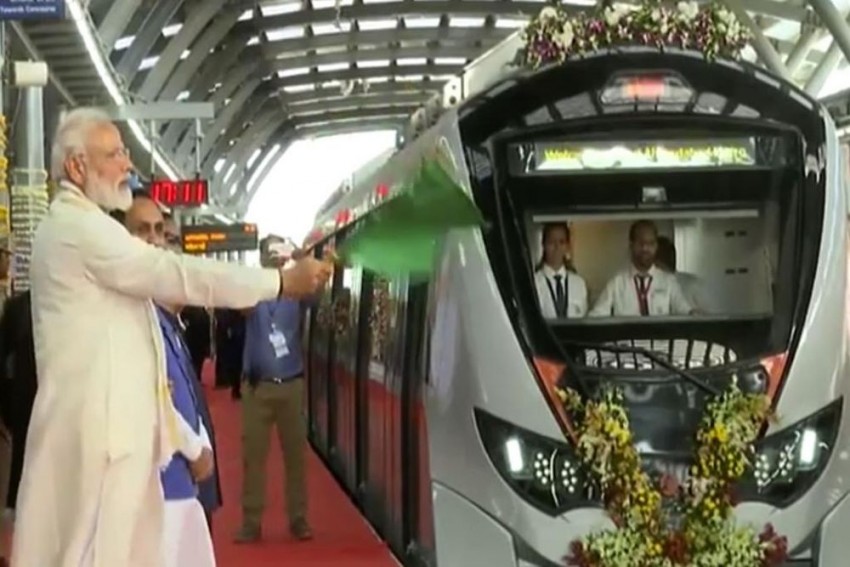 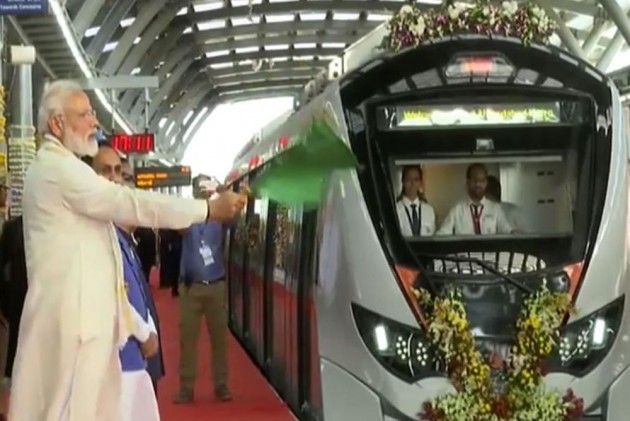 Prime Minister Narendra Modi on Monday inaugurated a 6.5-km stretch of phase one of the Ahmedabad Metro train service in Ahmedabad, Gujarat.

After inaugurating the 6.5 km stretch, connecting Vastral to Apparel park area in Ahmedabad, Modi also took a ride on the metro.

Modi reached Vastral Gam metro station and inaugurated the first phase by unveiling a plaque and waving a green flag to the metro train and travelled in it for a short distance.

The first phase of the project costs around Rs 10,773 crore, for which Japan has extended a soft loan of Rs 6,066 crore to the Indian government through its funding agency JICA (Japan International Cooperation Agency).

Gujarat government and central government are to each contribute Rs 1,990 crore for the project.

The phase one of the project covers a distance of 40.03 km, of which 6.5 km is underground and the rest of the stretch is elevated.

Phase one comprises of two corridors. The north-south corridor runs from APMC to Motera along the existing railway line and will cover a distance of 18.87 km. The east-west corridor connects Thaltej to Vastral in the city covering a distance of 21.16 km.

Both the corridors will have 32 stations. The first phase of the project is expected to be fully operational by 2021.

The state government had on February 4, 2010 incorporated the special purpose vehicle Gujarat Metro Rail Corporation Limited to implement the project.

The urban development ministry of the central government had in November 2014 issued sanction order for the project, and the then chief minister and now Madhya Pradesh Governor Anandiben Patel had performed ground breaking ceremony for the project on March 14, 2015.

The phase two of the project, which will cover a distance of 28.25 km, was given approval by the Union Cabinet in February 2019.

The second phase will connect Motera cricket stadium to Mahatma Mandir in Gandhinagar.

"These Metro Projects will not only add to connectivity, but will also reduce the travel time and enhance the ease of living substantially in the urban areas. It will provide comfortable and reliable public transport to travellers especially in Ahmedabad and Gandhinagar region," Gujarat Metro Rail Corporation said in a statement.

BJP Turned Battle Against Terrorism Into One Against Kashmiris, Muslims: CPI-M