Many Congress protesters were detained by the Bengal police and taken to the central lock-up at the Kolkata Police headquarters at Lalbazar, an official said. 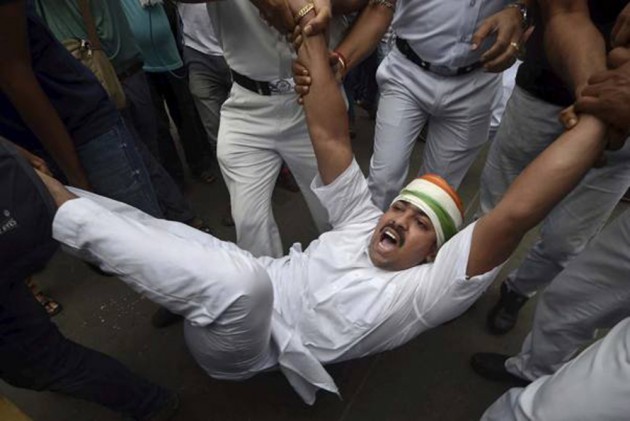 Congress supporters on Monday protested outside the Raj Bhavan in Kolkata over the Pegasus scandal. The protesters gathered in front of the north gate of the Governor’s residence and demanded that action be taken to investigate the scandal.

Further, the West Bengal government on Monday announced its decision to set up a panel headed by retired judges Justice MV Lokur and Justice Jyotirmoy Bhattacharya to investigate the issue.

These developments come in the backdrop of media reports claiming that Israeli spyware Pegasus was used to snoop on numerous prominent Indian personalities including journalists, politicians and activists.

According to a report published by The Wire, as many as 40 journalists, "three major opposition figures, one constitutional authority, two serving ministers in the Narendra Modi government, current and former heads and officials of security organisations and scores of businesspersons" were part of the list of potential or past victims, who were snooped upon after their electronic devices were hacked.

As Congress workers raised slogans outside the Raj Bhavan in Kolkata alleging that party leader Rahul Gandhi was also snooped upon, police detained some of the protesters and took them to the central lock-up at the Kolkata Police headquarters at Lalbazar, an official said.

"We will continue our protests till we see the end of it," Congress leader Ashutosh Chatterjee said as he was whisked away in a prison van.

Chatterjee and other Congress members shouted slogans against Prime Minister Narendra Modi and the BJP government at the Centre over the Pegasus issue, which has rocked national politics since last week.

Congress supporters protested in front of the Raj Bhavan on the same issue on July 22 as well.