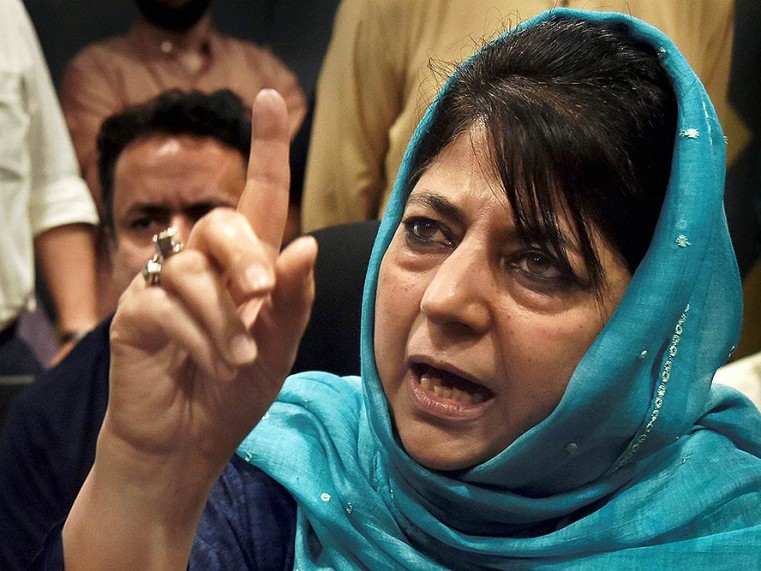 With the government extending detention of former Chief Minister Mehbooba Mufti under Public Safety Act for another three months, the National Conference and the People's Democratic Party have described it as “unbelievably cruel and retrograde” and “stifling voices of reason.”

The PDP said since August 5, 2019, the government has only deprived Kashmiris. Now the extension of PSA against Mufti is a loud alarm that BJP is fearful to compete with the only woman CM J&K has ever had, the party said commenting on its leader's detention.

“Stifling voices of reason has become the norm for the current dispensation especially post illegal scrapping of Article 370. Therefore, extension of my mother’s detention doesn’t surprise me. Wishful thinking to assume that by smothering any debate on Article 370, the issue will vanish,” Mehbooba’s daughter Iltija Mufti said.

Iltija also said that they haven’t received a copy of the order or dossier detailing new grounds of detention.

“Unbelievably cruel & retrograde decision to extend @MehboobaMufti’s detention. Nothing she has done or said in any way justifies the way the Indian state has treated her & the others detained,” former Chief Minister Omar Abdullah tweeted.

Moreover, the government has also extended PSA detention of National Conference leader Ali Mohammad Sagar and PDP leader Sartaj Madani by three months. Madani is uncle of Mehbooba. Both Sagar and Madani are in preventive custody since August 5, 2019. Sagar has held portfolios of Home, Law and Parliamentary Affairs, Public Works in the erstwhile state of Jammu and Kashmir during different periods when the National Conference was running the government.

While commenting on Sagar’s continuous detention, Abdullah said, “I’m struggling to get my head around the decision & the logic behind it because it smacks of vindictiveness & nothing else. New Delhi needed to make friends in J&K but is doing the opposite.” Sagar holds the position of general secretary in National Conference.

“BJP by further detaining Mehbooba Mufti under PSA is only proving that it is deeply insecure of her voice and is aware of its own failure to maintain peace in Kashmir,” the PDP said.

“Criminalizing a democratically elected leader for standing against the erosion of constitutional rights of Kashmiris, Mehbooba Mufti had only furthered India's democracy in J&K, and that's a crime in BJP's own constitution,” the party further said.

Mehbooba Mufti was arrested on August 5, 2019, the day BJP government revoked Article 370 and Article 35A of Indian constitution amid lockdown, communication blockade and arrest of thousands of people.

The government initially booked her under section 107 of CrPc for six months and after the expiry of the six months of her detention in February this year, she was booked under the PSA, which is preventive detention law. Minutes before she was taken into custody on August 5 last year, Mehbooba had managed to tweet that after the revocation of Articles 370 and 35A India will be seen as “occupational force” in Kashmir.

In its first Public Safety Act dossier or the ground of her detention against Mehbooba, the government had cited her tweets as main charges against her.

Government on April 8, 2020, shifted Mehbooba Mufti to her residence Fairview at the Gupkar Road in Srinagar after turning it into a sub-jail.