It is nothing short of a windfall for Paras, who may never have thought of joining the Modi govt until a month ago. 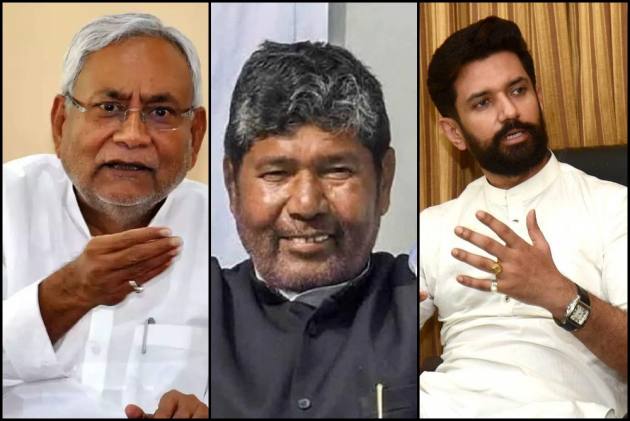 Amid a prolonged fight between Bihar Chief Minister Nitish Kumar and Lok Janshakti Partry leader Chirag Paswan, look who is having the last laugh? It is none other than Pashupati Kumar Paras, a new entrant into the Narendra Modi ministry.

Paras, 68, has emerged as an unlikely beneficiary of the bitter feud between Nitish and Chirag, set off last year by the LJP’s decision to field its candidates against all JD-U nominees in the Bihar assembly polls despite being part of the NDA.

It was a decision that cost Nitish about 35 seats in the assembly polls and reduced his party to play the second fiddle to its ally BJP in the ruling coalition. But Nitish has finally exacted his revenge, as LJP now stands vertically divided into two factions– one faction led by Chirag, the other by his chacha Paras, the younger brother of the LJP founder, the late Ram Vilas Paswan.

Though Nitish has categorically denied having played any role in what he calls the internal affairs of LJP, the political corridors remain abuzz with whispers that he played a key role from behind the scenes to fuel the rebellion by Paras and four other LJP MPs last month.

It is nothing short of a windfall for Paras, who may never have thought of joining the Narendra Modi government until a month ago. But he is now a cabinet minister for food processing industries at the Centre and has a real opportunity to prove his worth. Meanwhile, Chirag, who had been aspiring to fill the late father’s ministerial berth all along, has been left high and dry. He is now threatening to move the court.

To give Paras his due, he is no rookie in politics. He has been a seven-term MLA (and also an MLA once) before he won the 2019 parliamentary polls from Hajipur (reserved) seat, a pocket borough of his elder brother, who did not contest the last general elections election and took the Rajya Sabha route to reach Parliament.

And yet, Paras was never considered to be a heavyweight in Bihar politics. He always kept a low profile, primarily viewed in the political circles as a fiercely loyal brother who owed his entire political career to Paswan.

Always a doting family man, the big brother had rewarded him by making him the state president of his party in his lifetime. There was no scope or reason for the tussle between Chirag and Paras, who kept all his ambitions in check apparently in deference to the wishes of the family patriarch. Paras was even made a minister in the Mahagathbandhan ministry in 2017 when Nitish broke ranks with Lalu Prasad Yadav’s RJD to form the government with the BJP again.

No wonder, Paras refers to his departed brother as his ‘god’. But his ambitions had begun to surface after Chirag was anointed as the LJP’s national president in place of his ailing father. Chirag was later instrumental in getting Paras removed by Prince Raj, the son of Paswan’s other brother and four-term MP, Ram Chandra Paswan -- a decision that did not go down well with him.

Paras’ grievances against Chirag first came to the fore after Paswan’s demise in October 2008 when he spoke about Nitish in glowing terms for his development initiatives in Bihar. He, however, had to eat his words after Chirag reportedly pulled him up for doing that at a time when he was firing on all the cylinders against Nitish on his poll campaign, allegedly at the behest of BJP.

Political observers, In hindsight, believe that it enabled Nitish to spot the Achilles’ heel in the LJP’s family camps. JD-U’s crisis managers are said to have subsequently got in touch with all LJP MPs, except Chirag, to engineer the defection in his party. Though Paras insists that the five MPs had ‘removed’ the ‘autocratic’ Chirag as the national president to save the party on their own, the grapevine has it that Paras was lured away by the JD-U on the promise of a ministerial berth in the Modi government in place of his late brother.

But where does it leave JD-U? Rumour mills in Patna had suggested all along ahead of the reshuffle of the Modi ministry on July 7 that BJP was not keen on making Paras a minister in place of his brother but JD-U’s apparent insistence to get him accommodated led to his inclusion. It is widely seen as its apparent bid to further marginalize Chirag in his home state.

Earlier reports had also suggested that JD-U would get at least two cabinet berths in the new ministry, but at the end of the day, only one of its MPs, the party’s national president R C P Singh took the oath. It was surprising considering the fact Nitish had refused to join the Modi ministry in 2019 after being given only one berth in the Modi ministry. He had at the time said that the JD-U with its 16 Lok Sabha MPs wanted a proportionate not a symbolic representation in the Union government.

This time, however, he had no qualms in joining the Modi ministry even though JD-U could not get anything beyond a symbolic representation. Despite his apparent climbdown, the only consolation for Nitish appears to be is that it is not Chirag but Paras, who has been made a minister.

The JD-U may not have got a second berth but it seems to have a consolation prize by ensuring that its sworn political enemy, Chirag has fallen by the side to nurse his wounds all alone, without the overt or covert support of BJP.