BJP national president JP Nadda says most political parties are run by families in India but for the BJP, the party is the family 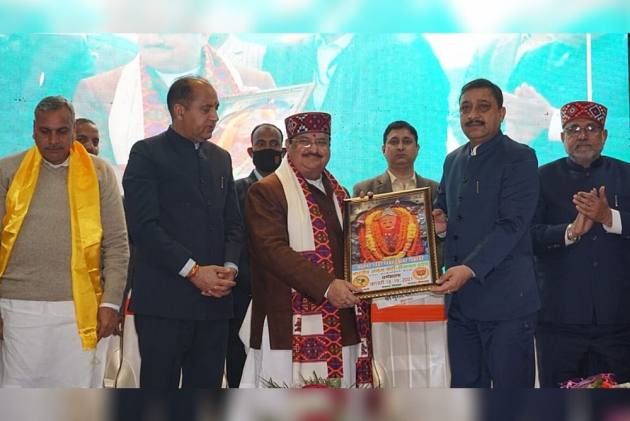 Hitting out at the country’s Opposition, BJP national president JP Nadda on Thursday described most political parties as “family outfits” whose high commands primarily constitute none else but “Tau-chacha” i.e. uncles and nephews.

Reaching out to the BJP workers, and newly elected office-bearers and members of the panchayats and gram sabhas, Nadda said no political party --- whether it’s the PDP, National Conference in Jammu & Kashmir or elsewhere in any other state, including Haryana --- can compete with the BJP.

“Today, in this country, almost every political party is run by a family. For them, family is the party but for us, the party (BJP) is a family. It's a huge difference and a basic one. Just imagine this. The 18-crore membership is not a mean achievement .This is our strength, our reach and our capability to gain strong acceptability. Can anyone compete with us? Perhaps none,” Nadda said.

The BJP national president --- who hails from Himachal Pradesh --- reached Dharamshala to a rousing welcome of party workers, who, dressed in their traditional attires, greeted him with dances at the Gaggal (Kangra) airport. Chief Minister Jai Ram Thakur himself escorted Nadda to the town, where the two-day state executive meeting has been convened.

Though the state Assembly elections are still two years away, Nadda’s visit to Dharamshala---headquarters of state’s biggest and politically sensitive district, was aimed to kickstart the party's preparations for the 2022 polls.

Congratulating the state party unit on its victory in the panchayat elections, Nadda said the winning streak should not stop here and they should not become complacent.

He recalled “When Atal Bihari Vajpayee ji was Prime Minister, he treated Himachal Pradesh as his home. Prem Kumar Dhumal, then chief minister, I (Nadda) being a cabinet minister, had the privilege to spend time with him and also push Himachal Pradesh's case for special funding and a central package. The biggest one was Rohtang tunnel – a project Narendra Modi completed as Prime Minister to fulfil Vajpayeeji’s dream.”

He underlined the policy of cultural nationalism, which is the core principle and objective of the BJP with slogan of “Sab ka Sath, Sab ka Vikas and Sab ka Vishwas” that the party’s government at the Centre and state (Himachal Pradesh) have resolved to be the public outreach policy.

Nadda spoke about the “Himachal model” of development, which has become a high point for several states seeking to replicate the same. Yet, more to it, he said is what the party’s organisational team has done here by introducing the concept of “panna pramukh” (booth-level worker), a brainchild of Pawan Rana, the party’s organising secretary in Himachal Pradesh. It paved the way for the party's biggest victory in the 2017 Assembly polls, then recent Lok Sabha polls, several bypolls and now the panchayat elections.

In 2022, the BJP will again form the government in Himachal Pradesh, he said.

In a brief interaction with media persons Nadda said he was heading for West Bengal after Himachal Pradesh. “We are going to form our government there winning 200-plus seats. My next trip from West Bengal will be Assam.”

He paid obeisance at the popular Jawalamukhi temple later in the day.