The organisation, Poorvanchal Gaurav, is hosting the festival online from November 18-20. 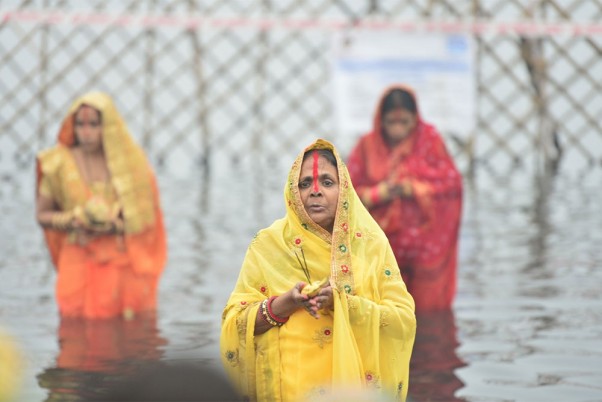 The four-day Chhath festival began on Wednesday. Folk songs dedicated to the Sun God and the aroma of traditional offerings filled the air at homes only as the ghats in Delhi, otherwise decked up for devotees every year, are not to be used this time.

The organisation, Poorvanchal Gaurav, is hosting the festival online from November 18-20.

Held from the sixth day onwards (hence called 'Chhath') after Diwali, the festival is celebrated to pay obeisance to the Sun as cosmic energy.

A member of the Poorvanchal Gaurav said the festival would be hosted for devotees on Facebook and YouTube so that they don't miss the sense of the community gathering that happens on ghats and other water bodies during Chhath.

The national capital has a sizeable population of people from Bihar and eastern Uttar Pradesh who observe it annually on the banks of the Yamuna or ponds, lakes and canals.

Some of the major ghats include the Qudsia Ghat and those in Wazirabad, Sonia Vihar, Najafgarh and Kalindi Kunj. People also observe the festival by converging at parks and gardens, where makeshift arrangements are made every year.

This year, however, all festivals are being held under the shadow of the Covid-19 pandemic.

A few days ago, authorities had decided not to allow gatherings of people at river ghats and water bodies as "there is a very high risk of spread of the virus through water".