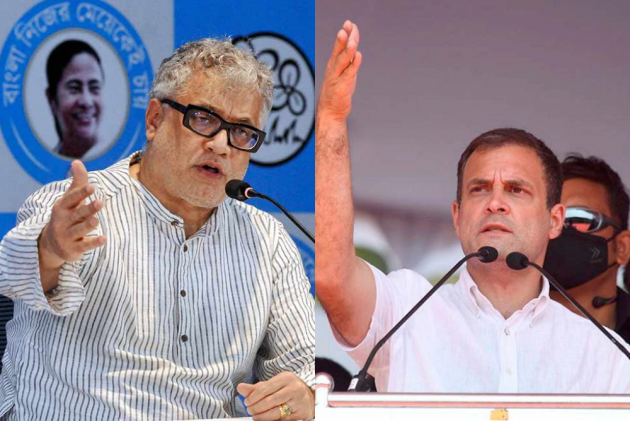 According to a media report published by The Wire, Pegasus spyware was used to spy on at least 40 Indian journalists from across media houses throughout the country.

According to the report, along with the 40 journalists, "three major opposition figures, one constitutional authority, two serving ministers in the Narendra Modi government, current and former heads and officials of security organisations and scores of businesspersons" were also part of the list of potential or past victims, who were snooped upon after their electronic devices were hacked.

"We know what he's been reading- everything on your phone," Gandhi wrote Monday as a tweet-reply to his own post two days ago in which he had asked people, "I'm wondering what you guys are reading these days."

We know what he’s been reading- everything on your phone!#Pegasus https://t.co/d6spyji5NA

The government has, however, dismissed allegations of any kind of surveillance on its part, saying the accusation has no concrete basis or truth associated with it whatsoever.

IT and Communications Minister Ashwini Vaishnaw told Lok Sabha that with several checks and balances being in place, "any sort of illegal surveillance" by unauthorised persons is not possible in India.

Since the government has said that it has not done any snooping, this should be probed, he said.

"I feel that there should be a thorough independent judicial inquiry or a joint parliamentary committee. We cannot just brush it under the carpet," he told reporters.

He raised the issue through social media too.

"GoI has denied resorting to unauthorised surveillance. The question this raises is, if #Pegasus is only sold to governments, which other govts (China/Pak?) are using it to snoop on prominent Indian citizens? Shouldn't the authorities call for an independent investigation," he tweeted referring to the Government of India.

GoI has denied resorting to unauthorised surveillance. The question this raises is, if #Pegasus is only sold to governments, which other govts (China/Pak?) are using it to snoop on prominent Indian citizens? Shouldn't the authorities call for an independent investigation? https://t.co/05yc8IEvDe

The CPIM said that two years ago, the party had raised in Parliament that this "dangerous spyware" was being used in India as revealed by WhatsApp.

"The Modi government’s response had not categorically denied that it engaged the services of NSO (the Israeli tech firm that created the spyware) but claimed that there is no "unauthorized surveillance". With these revelations, it is clear that this government has engaged NSO for such surveillance against its own citizens," the party said in a statement Monday.

"The Central government must come clean on what is its engagement with NSO, what are the terms and how much our public funds have been paid for this,” the party demanded.

Under Indian laws, the use of cyber spy software to hack smartphones even by the government is prohibited, the party said, asking under what law the government has undertaken such "surveillance activities" over citizens.

"The right to privacy is a fundamental right as laid down by the Supreme Court, but this BJP government is prevaricating on legislating the privacy law," the party said.

The CPIM also said there have been earlier instances of hacking smartphones and computers of human rights activists and they have been exposed. It alleged that the spying toll is digitally planted on their devices.

"It is then used for their arrests under draconian laws. The `snoop, plant, arrest’ formula employed by this BJP government is a violation of the fundamental rights of Indian citizens,” the CPIM said.

The TMC said it will raise the issue in parliament.

"It is a serious issue and the minister in his statement in the House does not deny that the government was using the software. We will raise this issue in Parliament," said TMC Rajya Sabha MP Derek O' Brien.