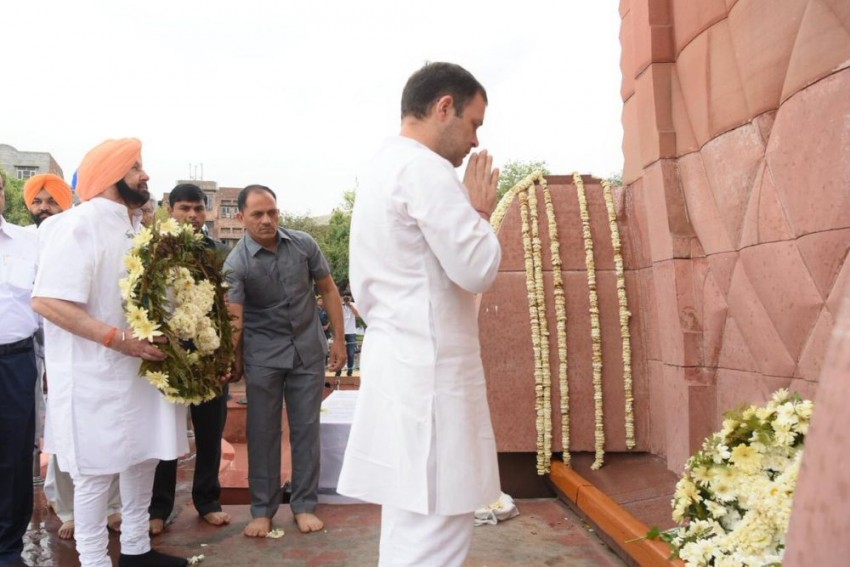 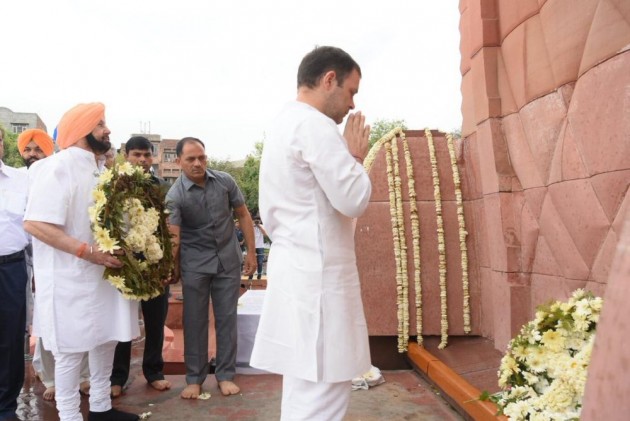 Gandhi, Singh, Punjab minister Navjot Singh Sidhu, accompanied by some other Congress leaders, paid floral tributes at the memorial inside the Jallianwala Bagh in the morning. They also observed a two-minute silence to remember those who were massacred in the tragic incident on April 13, 1919.

Amarinder Singh tweeted, "Remembering the martyrs of Jallianwala Bagh Massacre on the centenary of the most gruesome incident in Indian history. The sacrifice and valour of the martyrs of this tragedy will never be forgotten by. The nation remains indebted to them."

Remembering the martyrs of Jallianwala Bagh Massacre on the centenary of the most gruesome incident in Indian history. The sacrifice and valour of the martyrs of this tragedy will never be forgotten by. The nation remains indebted to them. #JallianwalaBaghCentenary pic.twitter.com/Mf6yDAnmLK

Gandhi arrived at Amritsar late on Friday night. Upon his arrival, the Congress chief, accompanied by Singh, went straight to the Golden Temple here and paid obeisance.

Singh and Punjab Governor V P Singh Badnore had also taken part in a candlelight march on the eve of the centenary of the Jallianwala Bagh massacre on Friday evening as part of the various events organised by the Punjab government to mark the historic occasion.

Singh had termed the tragic event as a heart-wrenching moment in India's history.

British High Commissioner to India Sir Dominic Asquith laid a wreath at the Jallianwala Bagh memorial here on Saturday on the centenary of the massacre and said Britain "deeply regretted" the suffering caused to the victims.

"The event of Jallianwala Bagh 100 years ago today reflects a shameful act in British-India history. We deeply regret what happened and the suffering caused. I am pleased today that the UK and India have and remain committed to developing further a thriving 21st Century partnership," Asquith wrote in the visitor's book at the memorial.

British High Commission in India also expressed "deep sorrow" at the loss of lives in the 100-year-old massacre.

"Today we remember with deep sorrow those who were killed on 13 April 1919 and regret the suffering caused," read a tweet on its official page.

'Today we remember with deep sorrow those who were killed on 13 April 1919 and regret the suffering caused': British High Commissioner to India #DominicAsquith

April 13 marks the 100th anniversary of the massacre, in which British forces led by Brigadier General Reginald Dyer opened fire on hundreds of unarmed, innocent Indians, including women and children, who were protesting peacefully against the oppressive Rowlatt Act of the British government.

The massacre, on April 13, 1919, is one of the darkest chapters of India's freedom struggle against the British occupation.

Hundreds of people, including students, local residents and visitors, held a candlelight march in Amritsar on the eve of the 100th anniversary of the Jallianwala Bagh massacre on Friday evening.

The British government, even after 100 years, has only regretted the massacre but stopped short of apologising for the killing of so many innocent people.

Rejecting the regret expressed by British Prime Minister Theresa May as "inadequate", Chief Minister Amarinder Singh on Friday demanded "an unequivocal official apology from Britain" for the Jallianwala Bagh massacre.

Terming the tragic event "a heart-wrenching moment in India's history", Amarinder said that the people of India wanted an unequivocal apology from Britain for the atrocity.

Vice President M Venkaiah Naidu will arrive here on Saturday afternoon for the main function to commemorate the 100 years of the Jallianwala Bagh massacre.

With inputs from Agencies