Omicron Covid-19: A comparative analysis of the infection and the mortality of all four waves confirms that the Omicron did infect a large number of people in the shortest span of time. However, it hasn’t caused death at all.

The new variant of Sars_Cov_2, the Omicron, was primarily responsible for the fourth and the largest wave to date in South Africa. The earlier three waves were caused by the Wuhan strain and its two variants, Beta and Delta.

A comparative analysis of the infection and the mortality of all four waves confirms that the Omicron did infect a large number of people in the shortest span of time. However, it hasn’t caused death at all. South Africa hasn’t reported any death due to Omicron to date. 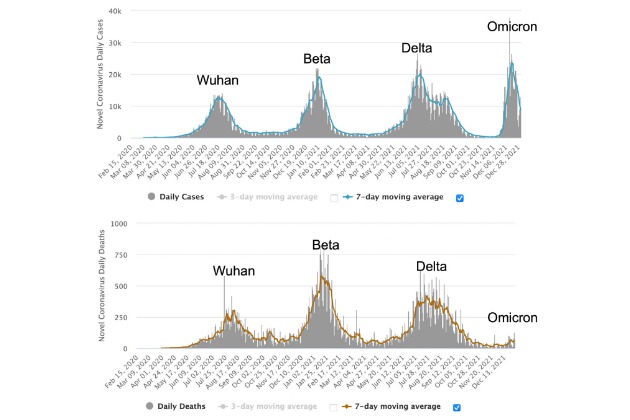 This analysis is in the line with the experts’ view that Omicron behaves like a live attenuated virus and can act as a natural vaccine.

The first wave was due to the Wuhan strain, also called the original Sars_Co_2. It started in early June and lasted till August end. The highest seven-day average infection and death were around 12,000 and 297 respectively.

Almost three months later in mid-November, the country experienced a surge in cases. It culminated into the second wave primarily due to a new variant, Beta which originated in South Africa itself.

The highest average seven-day infection and death were 19042 and 510 respectively. It took almost three months to flatten the curve and normalise the situation. This was the deadliest wave for South Africa as the casualties were very high.

South Africa witnessed the beginning of another wave, the third one during mid-May. It was almost three months after the second wave. The genome sequencing of samples of positive patients disclosed that the majority of them were infected with Delta variant. It continued for four months and the highest seven-day average of infection and death were 19184 and 305 respectively.

The virus mutated in South Africa for the second time and a new variant Omicron emerged. This propelled the fourth wave from November 20 and at present, it is on a declining phase. During the fourth wave, the highest-seven day average infection and death were 19400 and 44 respectively.

Since South Africa hasn’t reported any confirmed death due to Omicron, other variants like Delta, which is still present and infecting a smaller number of people, might be responsible for these casualties, believe a lot of experts.

Experts suggest that the highest seven-day-average infection remained around 20,000 during the last three waves – second, third and fourth – however, in the fourth wave, the peak reached early and also declined fast. "This suggests that Omicron is infectious but mild and people who got infected don’t take much time to recover," a community medicine doctor working with a reputed govt hospital said.

“From these trends, it can be concluded that the mortality rate of Omicron is much lower than other variants of the virus. Recent studies have suggested that it infects fast but multiply 12 times less than the Delta variant, it is perhaps due to this reason, it is not causing any severity,” Gyaneshwar Chaubey, a professor of genetics at Banaras Hindu University (BHU), said.

Professor Chaubey has been closely tracking the Covid-19 scenario in South Africa since the beginning and has analysed all four waves minutely.

“However, since South Africa currently has a 56.2% seropositivity as well as 26.7% fully vaccinated people, I believe these factors also contributed and were helpful in keeping the death rate low,” he added.