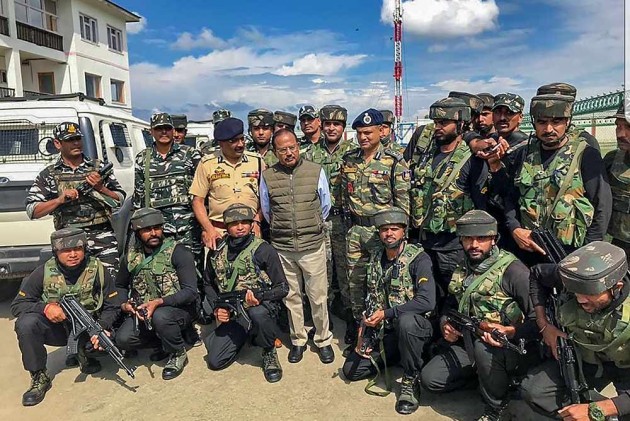 National Security Advisor Ajit Doval on Monday undertook an aerial survey of the city and South Kashmir areas to take stock of the security situation as the valley celebrated Eid al-Adha amid strict restrictions that are in place after the decision to revoke provisions of Article 370.

Eid prayers were concluded peacefully across Jammu and Kashmir, they said.

In Srinagar, keeping in view the possibility of terrorists, militants and mischievous elements trying to disturb public order and peace, reasonable restrictions were imposed on large gatherings in sensitive areas. People gathered in large numbers at local mosques to offer prayers and greet each other, the administration said in a statement.

In Jammu, over 5,000 offered prayers at Eidgah while similar large gatherings were there in the province.

However, there have been some minor localised protests of a routine nature at a few places, the statement said.

"This is not unknown in Jammu and Kashmir in the past. There have been some isolated incidents of stone pelting, again at an insignificant level. Police handled these locally and dispersed the protesters. There are no major injuries barring 1 or 2 individuals," it said.

The statement said restrictions imposed in Jammu and Kashmir last week were eased from Saturday onwards in a calibrated manner, balancing the requirements of facilitating the public and preventing mischievous elements from creating trouble.

People came out in large numbers and thronged the streets of Srinagar on Saturday, about 20 per cent of the shops opened and hawkers and street vendors sold consumables, it said.

On Sunday, there was further relaxation resulting in a large volume of traffic and traffic jams in some areas, it said.

Over 50 per cent of the shops were open and Eid shopping was done unhindered, it said.

There was massive sale of goats and sheep in Srinagar and other parts of the valley with over 2.5 lakh sheep sold in the city, it said.

It said removal and tightening of restrictions is a local exercise by the police and district administration based on their assessment of the need to maintain public order and peace.

"As and when situation demands, the easing is happening across the state. Even today on Eid, reactions will be based on local assessment," it said.

The statement said restrictions on connectivity continue as a result of security requirements.

"However, people are being facilitated to contact their relatives and children outside the state through widespread deployment of help lines at convenient locations such as the District Commissioner's office, police stations and police posts. Thousands of calls are being every day from these places. Over 5000 calls were made in one day in Srinagar," it said.

"Over 300 public points for phone connectivity are functional across the Kashmir division. Media is being facilitated through a media centre set up by the state government. Regular briefings are being held in the media centre every day at 11 am and 6 pm by a senior government official. Media has been provided phone and Internet facility at the media centre," it said.

The statement said there are some reports in the media about firing by security forces and deaths and injuries.

"It is categorically denied that any firing incident has happened in the state. Not a single bullet has been fired by security forces nor has there been any casualty," the statement said.

"This is usual and has been done for panchayat elections, Parliament elections and at other times when violence by militants/ separatists were apprehended. The Government is committed to maintaining peace and public order and people have been most cooperative. Separatists and militant elements are being dealt with as per law," it said.